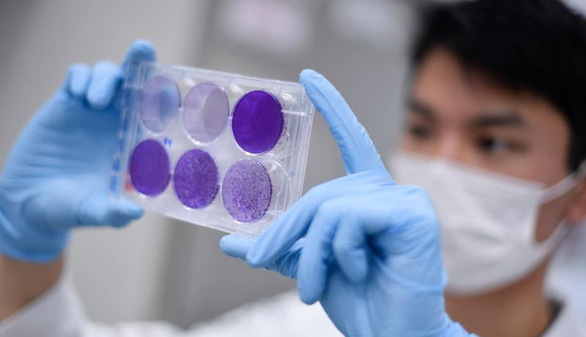 New research has discovered that the SARS-CoV-2 virus has the ability to self-replicate in the brain, causing a lack of oxygen for brain cells – Photo: AFP

Not only causing damage to the lungs after encroaching on this internal organ, the SARS-CoV-2 virus has the ability to directly attack the brain of people with COVID-19 and this is believed to be the cause of some patients. COVID-19 has headaches, feels light-headed, and even falls into a coma.

According to a study published on 9-9 led by immunologist at Yale University (USA) Akiko Iwasaki, the SARS-CoV-2 virus has the ability to self-replicate in the brain and the presence of it here causes a lack of oxygen in the brain cells.

This, according to the study, explains the headaches and dizziness in some patients with COVID-19, but so far there has not been any conclusive evidence.

To clarify the arguments made, Mr. Iwasaki and his colleagues decided to approach the problem in three research directions: for infection of SARS-CoV-2 virus with brain culture in the laboratory, for infection. virus in laboratory mice and brain tissue for deaths caused by COVID-19.

In the first direction, the team discovered that the SARS-CoV-2 virus could infect nerve cells and then invade the nerve cell control machine to allow the virus to replicate. The infected cells then destroy the oxygen supply, thereby easily killing surrounding cells.

However, the team confirmed that the brain cell organ concentrated enough ACE2 to create a pathway for the SARS-CoV virus to penetrate, and these proteins all existed in the brain tissue of the patient who died.

Finally, the research team examined the brains of three patients who died from complications related to COVID-19, and found that the virus was present in the brain in all three cases with varying degrees.

Evaluating the above study, Andrew Josephson, President of the Department of Neurology at the University of California (USA), Andrew Josephson, said that this study deserves attention because it detects and clarifies whether or not there is a direct link between SARS-CoV -2 and the brain is very important. He said he will continue to pay attention to the research until it has been evaluated.

It is not surprising if the SARS-CoV-2 virus has the ability to break through the “defense” that protects the cerebral vessels – a structure that surrounds the blood vessels of the brain and then seeks to prevent foreign entry. Zika viruses are a good example of this ability and they can cause major brain damage to an unborn baby.

So far, however, medical practitioners believe that the neurological effects in half of COVID-19 patients may be due to an abnormal immune response that causes brain stimulation, rather than the cause. The virus directly enters.