The Discus is a freshwater fish very popular with aquarists for its magnificent colors, its rather rare round shape and its peaceful character. It swims mainly on the middle part of its glass habitat. This fish has not revealed all its secrets. We do not yet know well its way of life in the wild but rather in an aquarium through the experience of enthusiasts who breed Discus.Let’s discover together some of its peculiarities and how to acclimatize it. best possible in this environment.

The Discus (Symphysodon aequifasciatus), also called Blue discus, belongs to the family of Cichlidae. It is native to South America. It is more particularly encountered in moderate currents of fresh water and slightly cloudy in Brazil, Colombia and Peru.

This bottom and middle fish is among the rare freshwater specimens to have this almost round shape. It sports beautiful colors, and we can see some variations of tones depending on where it lives. Black, vertical stripes appear on his body when he feels in danger. Thus, it can better camouflage itself among aquatic plants and escape its predators.

The life expectancy of the Discus in the wild can reach about fifteen years. In aquarium, it can live between 15 and 18 years provided that it benefits from an environment perfectly adapted to its physiological needs. 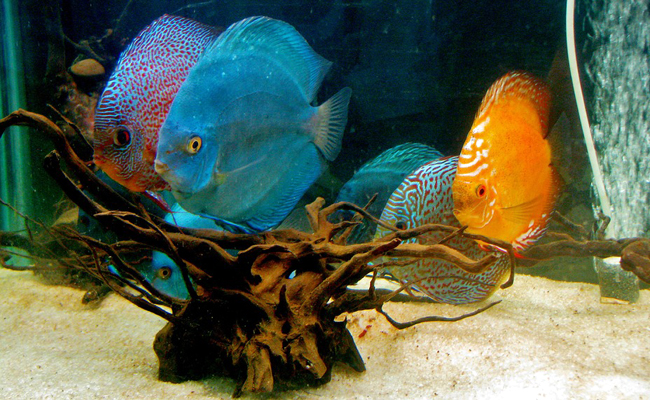 How to breed Discus in an aquarium?

It is quite possible to breed Discus in a community aquarium, but it is better to have proven experience in aquarists. It is not the fish that we recommend to neophytes because it is fragile and if all the conditions are not met, it can get sick and die.

It is highly preferable to install there a minimum of 5 Discus rather than a single individual. Buying Discus from a pet store specializing in aquariums allows you to obtain specimens that are already acclimatized and in good health.

The aquarium water must have the following characteristics:

The Discus therefore needs a Hot water, acid and sweet. As for the size of the aquarium, it should be sufficient. A 350 liter bin is really a minimum. We set up an underwater environment in order to reproduce the natural environment of these fish, and we place a fairly large root if possible. Some decorations chosen with discernment are useful so that the Discus have the possibility of hiding.

In nature, the Discus must be able to camouflage itself so as not to be attacked by the Piranha which lives in the same type of environment. We must in any case take care of especially do not cohabit these two species of fish. We only opt for species of freshwater fish adapted to the Discus, the latter being very peaceful and quite timid, even fearful. It behaves well in nature and in an aquarium.

The cohabitation between Discus and too many big fish is to be avoided. It can rub shoulders with the scalar but only in an aquarium of more than 600 liters. This is therefore undesirable if the bin is smaller. The species perfectly compatible with the Discus are for example:

This oviparous reaches sexual maturity at 1 year. He himself determines the territory where the female must lay her eggs. But before that, the female and the male choose each other to reproduce and are faithful to each other. Once the substrate has been cleaned by the couple, and hardly the laying is done, the male fertilizes the eggs. When these hatch, the young are usually closely watched by both parents. These lay on the backs of their fry a nutritious mucus. However, despite this good care and all the attention that the couple pays to their offspring, the little Discus remain fragile throughout their growth.

At the time of reproduction, it is better to separate the Discus from the other fish in the aquarium because the parents tend to eat their eggs if they are constantly disturbed.

The aquarium must be cleaned very regularly in the rules, and for the Discus to live there for a long time, we change 1/5 of the water every 14 to 16 days, making sure to bring new water at the same temperature as that being already in the aquarium. Beware of large variations in parameters (hardness, pH, etc.) to which the Discus is very sensitive.

Finally, as is the case for many other fish, we distribute the food of the Discus once a day. It must have enough food but not excess as this can quickly increase water pollution.This omnivore appreciates microorganisms and foods of plant origin. Giving him different types of food is essential for avoid nutrient deficiencies. In addition, it is necessary to alternate the frozen food with the flakes, the fresh food and the granules.

Take care of your Discus is a daily occupation to allow them to live as long as possible. In addition, these fish are quite expensive to buy, between 30 and 50 € per specimen. Having to buy them frequently to replace those that could not withstand the poor environmental conditions is daunting to say the least.