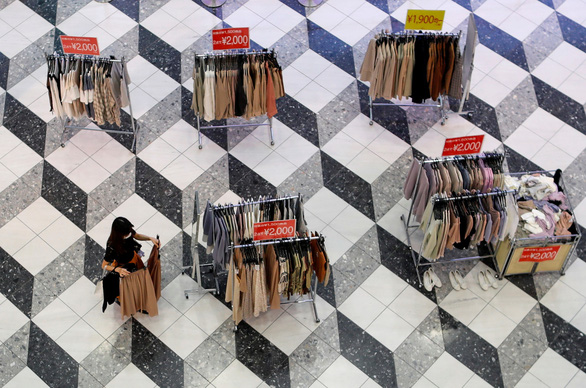 Women’s clothing stalls have only one customer in the Japanese capital Tokyo – Photo: Reuters

The latest model of economic recovery after the COVID-19 pandemic is often mentioned by the British press as the K-shaped model.

The straight stroke of the K is used to indicate a sudden economic downturn.

The two short oblique lines of the letter K show contradictory recovery status, depending on the sector and related business.

Two opposite strokes of the letter K

Some companies on the slant above the K such as Big Tech (5 big technology companies including Google, Amazon, Apple, Microsoft, Facebook) are leisurely escaping from the crisis to surf to the peak of historical development.

In the second quarter of 2020, Amazon’s revenue grew 40% year-on-year to $ 88.9 billion, according to Slate. Amazon’s grocery arm’s revenue tripled during this period as the blockade affected the majority of the world’s population, prompting people to shop through delivery.

Retired people are better than workers

A similar phenomenon of inequality is observed among consumers. Some groups that are safe and even “stay well” during a pandemic include qualified employees, officials, public sector workers or retirees. In general, their income has not decreased. In France, the Retirement Orientation Council (COR) calculates the average net pension will increase by 1.2% this year, while the average net salary is down 5.3% from last year.

According to a survey by the US Federal Reserve (FED), 63% of qualified employees can work from a distance completely, while only 20% of those with the equivalent of grade 12 or below are capable of working. work from home. The already precarious life of a part of the workforce (young people, temporary workers, microenterprises, small businesses) is getting worse and worse.

Even subjects that did well during blockade continued to build properties. The Financial Times cited the example of a skyscraper 220 Central Park South luxury in Manhattan (New York). Up to 13 apartments here have been sold for a total value of 598 million USD since the beginning of 2020, or an average of 46 million USD per unit.

The financial newspaper commented: “Even if you are richer than King Croesus, buying such real estate requires a bit of faith in the future. The 13 0.01% club members are willing to spend. a lot of money shows they stay out of the economic turmoil that envelops the rest of the world.

V: is the most optimistic recovery scenario. The economy declines quickly, then recovers quickly when the blockade ends. The government has enacted enough measures to make up for the crisis and the pandemic does not start again.

U: is a less favorable scenario but still optimistic. The economic recession lasted longer and then recovered slowly. It will not return to the pre-pandemic situation before the end year 2020.

W: is the recovery scenario twice. The economy accelerates, then slopes again then accelerate again. The cause was that measures that prevented COVID-19 were lifted too quickly or didn’t stop, followed by a second outbreak.

L: is the most gloomy scenario. The measures to revive the economy are too modest, leading to the risk of a strong recession. Mass bankruptcy companies caused economic stagnation.