The inflationary environment is tense in emerging economies (EMs). The rise in consumer prices accelerated again in late 2020 – early 2021, particularly in Latin America and Central and Eastern Europe. For the majority of countries, inflation remains anchored in the upper end of the band of authorized fluctuations (cf. graph 1).

The dynamic is particularly worrying in Brazil, Russia and especially Turkey where inflation is moving well above the target set by the respective central banks. The situation is less worrying in Asia, however. With the exception of India, inflation remains low or even absent in the region.

Inflationary sources are numerous. The first concerns the price trajectory of food and agricultural products. The latter, whose weight is high in the general price index of MS, increased sharply in the last quarter of 2020. Turkey, Brazil and to a lesser extent India and Russia are the most affected (cf. graph 2). Added to this is inflation by excess money creation, a consequence of the accommodating monetary policies put in place to deal with the Covid crisis. Here too, Turkey and Latin American countries such as Peru and Brazil are the most affected (cf. graph 3). 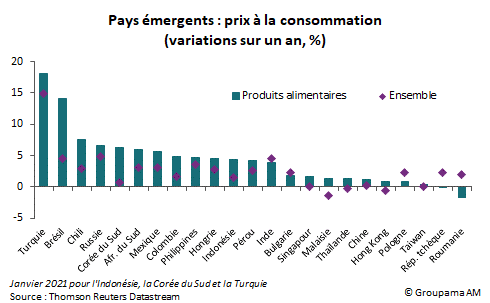 At the same time, specific factors have maintained the upward pressures such as the delayed effects of currency depreciation on imported inflation (Turkey, Brazil) or the impact of tensions on the labor market and therefore on wages (Hungary, Poland, Czech Republic). Finally in several countries (Russia, Latin America), the health crisis and the containment measures have only exacerbated supply shortages resulting from underinvestment of the economy and weighing on production costs (cf. graph 4). It should be noted that the weakness of domestic demand has helped to ease upward pressure on prices in Asia, particularly in China. 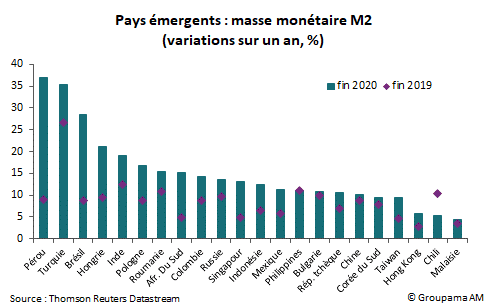 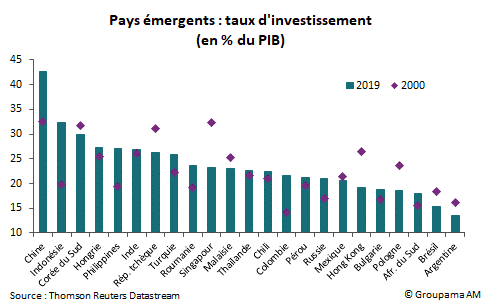 Inflationary pressures are set to persist in vulnerable countries. World prices of food and agricultural products will continue to rise due to the strong industrial catching-up of developed countries and Asian exporting countries. Vigilance must be placed on the development of factors maintaining the pressures on core inflation, particularly in Turkey and Central Europe. In this context, the central banks of the countries concerned have no other choice than to normalize or even tighten their monetary policy to contain the risk. This is already the case in Turkey, where the cycle of raising the key interest rate began at the end of 2020 and is expected to continue at least until the summer. Other countries are likely to follow suit and change course in 2021. In Brazil and the Czech Republic, the respective central banks have signaled the possibility of key rate hikes this year despite an unfinished economic recovery. In Russia and Hungary, the likelihood of further monetary easing has also declined.

The strategy of Asian central banks will be different. In the absence of inflation while the recovery is weakened by the uncertain health environment, monetary policy is expected to remain accommodative in the region for an extended period. In some countries, the authorities still have room for maneuver for further flexibility if necessary. This is particularly the case for ASEAN countries. The exception of the region will be Chinese. Indeed, the economic stimulus program has given way to the priority of ensuring financial stability and pursuing the structural transition. This implies a more cautious and neutral monetary policy. In other words, the authorities are once again engaging in a “Stop and Go”, which means that further cuts in banks’ reserve requirement ratios are unlikely this year. On the contrary, we are waiting for monetary conditions to tighten in order to bring the debt trajectory under control. However, cautious and targeted support measures will occasionally be put in place if activity should slow sharply.