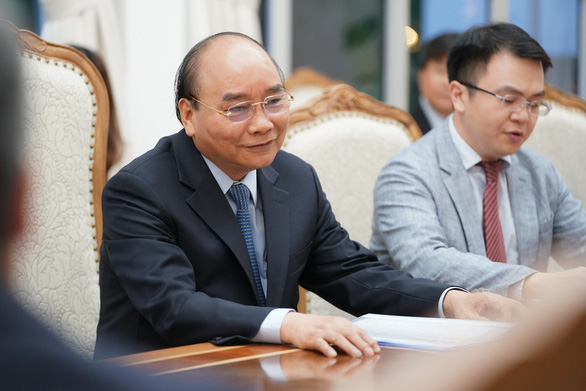 On the afternoon of September 16, Prime Minister Nguyen Xuan Phuc had a meeting with the Dutch Ambassador Elsbeth Akkerman, the Belgian Ambassador Paul Jansen, and the investors of the European Union with the participation of the Ministry of Planning and Investment, Industry and Trade, Foreign Affairs, Government Office and Ba Ria – Vung Tau province.

Accordingly, the project construction location that foreign investors are planning to invest in the Cai Mep Ha Logistics Center (Ba Ria – Vung Tau Province). The investors said the project could welcome the ship large-tonnage containers, promoting inland waterway transportation, transporting goods, and agricultural products from the Mekong Delta to Cai Mep Ha and to the world.

Therefore, investors want the project to be approved soon, and at the same time affirming their commitment, if they are selected, they will implement the project on schedule, with quality, applying “green transport” measures. for sustainable development. The leader of Ba Ria – Vung Tau province said that the province has approved the 1/2000 plan, locate the project, and is ready to have clean land for investors.

Appreciate Vietnam’s cooperation with Belgium and the Netherlands when many businesses make effective investments, such as Rent-A-Port Company in Dinh Vu Industrial Park in Hai Phong, Damen Shipbuilding Company …, but the Prime Minister said that this result is quite modest. Therefore, it is of great significance to strengthen cooperation once the EVFTA Agreement comes into effect.

Prime Minister emphasized the request of localities and ministries to accelerate the project – Photo: Chinhphu

Dutch Ambassador Elsbeth Akkerman congratulated and expressed his impression when Vietnam dealt with both the epidemic prevention issue and economic development. She stressed EVFTA will be a boost for development, creating a basis for cooperation and investment in a logistics project, affirming the Dutch government’s support for this project, reflected in the Dutch Development Bank’s commitment to contribute 10% project investment capital.

The same, similar, Belgian Ambassador Paul Jansen also congratulated Vietnam on controlling the translation of COVID-19 and said that Belgium International Investment Group will contribute capital to this project.

The Prime Minister suggested the two countries continue to support and care and join the EU to speak up more strongly in the protection of the rule of law in the seas and oceans and support the position of Vietnam and ASEAN on the East Sea.

The Prime Minister thanked the two countries for their support to Vietnam, and at the same time offered to support improving the capacity to effectively implement EVFTA and to communicate widely to the EU localities and businesses.

Prime Minister affirmed The Government of Vietnam always creates favorable conditions for foreign investors and large enterprises, especially the EU, enterprises with high potential and high technology capability to do business and invest in Vietnam. including projects in Ba Ria – Vung Tau.

Whereby, Prime Minister assigned the People’s Committee of Ba Ria – Vung Tau to coordinate with the Ministry of Planning and Investment to consider the investor’s proposal, report to the Prime Minister, and emphasized: “Who is slow, I will criticize “.