Animal husbandry has been a human practice since time immemorial. These so-called farm animals are animals used mainly to help humans, whether to feed them or to help them with various tasks. They are thus classified into five categories: meat producing animals, dairy animals, poultry animals, animals used for transport and work and animals used for textiles. But what exactly are these farm animals? And for what purposes are they used? This is what we will see in this article.

The cow and the ox

The cow and the bull or ox (castrated bull) are mammals of the bovidae family. These animals are ruminant herbivores, which means that they are polygastric (they have several stomachs), which partially digest by remasticating their food after ingestion. These animals live an average of 20 years and weigh between 500 and 900 kilos for cows and between 900 and 1,200 kilos for bulls. The largest male specimens can even reach a weight of 1600 kilograms.

Their diet on a farm consists mainly of grass and hay (although unfortunately more and more breeders give them silage and industrial flour which is not part of the diet of These animals).

Cows are mainly raised for their milk, which is the basis of all dairy products like cheese, cream or butter, as well as for their meat.

The hen and the rooster

The hen and the rooster are omnivorous land birds of the order Galliformes or Gallinaceous. There are a multitude of different species found all over the world. Man has been domesticating the hen for over 7000 years. The first peoples to domesticate them would be Indian peoples and the Chinese.

On farms, chickens are raised for meat, but also for their eggs, which they lay regularly. Males, roosters, are mostly used for breeding, and sometimes for their meat.

In addition to being used on agricultural farms, there are more and more chickens in private homes. Indeed, these animals have the advantage of being easy to maintain, of recycling all organic kitchen waste, and in addition to producing eggs regularly.

The turkey and the turkey are omnivorous land birds of the order Galliformes, just like the hen and the rooster, with the difference that they are much larger and larger than the latter. These special birds are mainly known from the male, who has a strange appendage on the top of his beak.

Turkeys and turkeys are mainly raised on farms for their meat. Turkeys lay much less regularly than hens, so they are not used as laying animals. Their eggs are larger than those of hens, and their taste is about the same.

The pig and the sow

The pig and its female, the sow, are a subspecies of wild boar. They are omnivorous mammals of the Suidae family. The pink pigs that we know in France are just one of the many species that exist on the globe. Other species are bred in France, such as the black pig. These animals are known to be very intelligent, and have many similarities to humans, including skin and social behavior.

On farms, pigs are raised for their meat, although in some countries it is prohibited for religious reasons.

The horse and the mare

The horse and the mare are herbivorous mammals of the equine family. Their diet on the farms is mostly grass and hay. For horses too, a wide variety of species roam the globe, whether in captivity or in the wild.

Historically, humans have been raising horses for over 4000 years. The Mongolian tribes are said to be the first peoples to have managed to domesticate this proud animal. Whatever the origin of a human society, the horse has contributed to it, whether it is to wage war, to help with agricultural work, particularly plowing, for transport or to carry heavy loads, and this to the four corners of the globe. 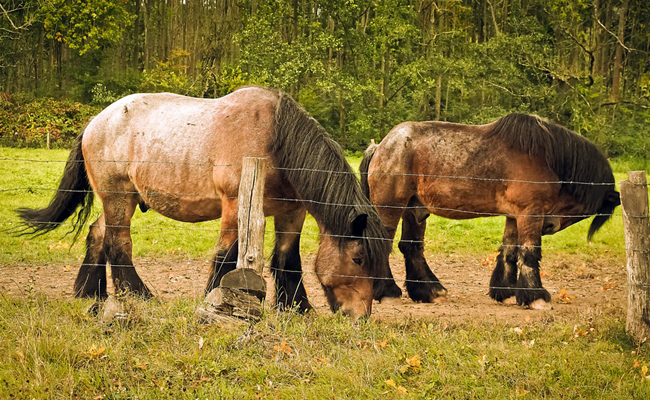 On farms, draft horses are mainly bred to help with agricultural work, and on a few farms they are bred for their meat, but this is not widely used.

In Western societies, they are mostly found in equestrian centers for riding.

The donkey and the donkey

Cousins ​​of the horse and the mare, the donkey and its female the donkey are herbivorous mammals of the equine family. There are a multitude of different species all over the world, in the wild or in captivity.

Historically, the donkey and the donkey were mainly used for transporting heavy loads, but also to help with certain agricultural work, such as plowing.

Donkey milk is also appreciated, especially for making soaps. The meat of these animals is consumed very little.

The goat and the billy goat

The goat and its male, the goat, are known for their uniquely shaped horns (especially those of the goat). They are mammals of the Bovidae family, just like cows, and are also ruminant animals.

The goat in history was very present in the farms of ancient Greece, a country where cows were not very present. It is mainly used for its milk which produces excellent cheeses. Its meat is rarely eaten nowadays.

The male is mainly present in farms as a breeder.

The sheep and the sheep

The sheep and the ewe, the female, are ruminant herbivorous mammals of the bovidae family like the goat and the cow. In breeding, its diet consists mainly of grass and hay.

Historically, sheep are among the first animals to have been domesticated by humans. Sheep allowed humans to warm up during harsh winters. Indeed, its thick coat was used to make wool and then make all kinds of clothes or even blankets. Its wool is still used for the manufacture of certain clothes today, sweaters, coats, scarves, plaids …

Sheep’s milk is also very popular, especially for making delicious cheeses. Mutton, or more precisely lamb, is always eaten, in particular as a shoulder or as a stir-fry for tagines, couscous, etc.

The rabbit and the rabbit

The rabbit and the rabbit, are in reality lagomorphs, (the family which includes rabbits, hares, etc.); rabbit being a generic term used in France. They are herbivorous animals, and there are a multitude of species around the world.

Today, they are mainly found as pets, especially dwarf species, or in the wild. Otherwise, the rabbit is mainly raised on farms for its meat, which is very popular with gourmets.