The French Asinian herd is particularly diverse. The national stud farms and the Ministry of Agriculture mainly recognize seven breeds, namely the Bourbonnais donkey, the Provence donkey, the Pyrenean donkey, the Cotentin donkey, the large black donkey from Berry, the donkey Norman and the Baudet du Poitou.

The Baudet du Poitou represents the oldest Asinian breed in France. It is mainly used to mate with mule mares in order to obtain the hybrid donkeys known as mule or mule. The Baudet du Poitou is raised in Deux-Sèvres. It is distinguished by its large fan-shaped ears and very hairy, its long and curly hair, its coat ranging from bay to black and its build since it can weigh up to 410 kg for a height at the withers of 1.56 m.

The Norman donkey is raised in Lower Normandy. It was officially recognized in 1997 as an Asinian breed. It has an estimated size between 1.10 m and 1.25 m and is characterized by its bay to brown bay dress on which we can see a cross of Saint-André. Formerly, the Norman donkey was mainly used for market gardening or transporting milk cans, while nowadays it is popular for tourism and recreation. His stud-book or genealogical register is managed by the Donkey Normand association.

He lives mainly in Cher and Indre. The large black donkey of Berry stands out for its large size since a male can measure up to 1.45 m at the withers. It has wide, open ears and a straight head. Its bay-brown to black pangaré coat should be of a uniform color with the presence of light gray on the belly and a white eye contour. Like most donkeys, the big black donkey of Berry is used in tourism and recreation, whereas previously it was used to haul barges and work the vines.

It is difficult to decide on the origins of the Pyrenean donkey since there were several types because of the large extent of its original cradle. Today, the different Tarbais, Lourdais or Béarn types have been grouped into two main categories: the Catalan type and the Gascon type. The first is elegant, thin and also very large in size since it is almost 1.60 m while the second is stockier and smaller. 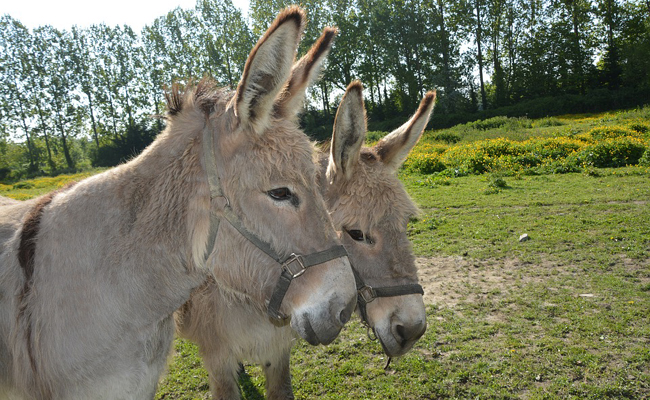 The Cotentin donkey breeding region is located in Manche. Its official recognition dates from 1997. This medium-sized breed wears a gray coat on which we can see a crucial line, the famous cross of Saint-André. The Cotentin donkey also reveals welts on the limbs and a gray-white belly. He is known for his calm character, his docility and his affectionate side.

The Provence donkey is a fairly recent breed since it was officially recognized in 2002. Living in Provence, it displays a gray coat (dark gray punctuated with brown and red, light gray or dove gray). The breed features a strong head, a chunky neck, and high set ears. It is a rustic animal used today for brush clearing, hiking or harnessing.

Last but not least, the Bourbonnais donkey is raised in Auvergne. Although historically, we can attest to its presence since the 12th century, it was not until 2002 that it was officially recognized as an Asinian breed. The Bourbonnais donkey is medium in size and has a brown to brown bay coat with the famous cross of Saint-André on its coat.