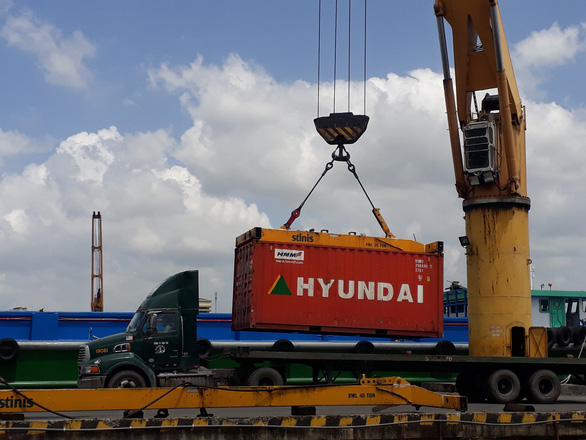 Despite the COVID-19 epidemic, the country’s total export turnover in the past 8 months still increased by 2.4% compared to the same period last year (an export container has completed customs clearance) – Photo: L. BAR

Specifically, according to the latest statistics on the import and export situation announced by the General Department of Customs on the afternoon of September 14, by the end of August, the total import turnover of the country reached $ 161.8 billion, down 2.4% over the same period last year.

The biggest drop was complete cars with 43% in both volume and import value. By the end of the last 8 months, the number of imported cars was 53,812 units with 1.22 billion USD.

Followed by the import value of petroleum, liquefied gas, petroleum products also fell sharply. Especially, petroleum products of all kinds, compared to the first 8 months of last year, the amount of foreign currency spent on importing this commodity group decreased by more than 40%, to US $ 2.36 billion.

In contrast, the group of computers, electronic products and components increased by 15.6% over the same period last year when the import value reached 38.7 billion USD.

Electrical appliances and components also increased slightly by 4.3% with the amount of foreign currency spent entering this group of 1.4 billion USD.

Contrary to the import turnover, despite COVID-19, the total export value of the country in the first eight months of this year increased by 2.3% over the same period last year when it reached more than 175.3 billion USD.

Furniture products made of other materials other than wood also increased dramatically by 54.4%, reaching approximately USD 1.5 billion.

The group of toys and sports equipment brought in 1.7 billion USD, up 63.7% over the same period last year.

The export value of computers, electronic products and components in the past eight months reached more than US $ 27.7 billion, up 25.3% over the same period last year.

In the first quarter of 2020, trade surplus reached 2.8 billion USD

Preliminary information on the import and export situation in the first three months of this year, on the afternoon of March 30, the General Department of Customs said the bright spot in the economic sector in the first quarter of 2020 was the merchandise trade balance. the country has a surplus of 2.8 billion USD.