Discovered by Marco-Polo during the thirteenth century, the Silk Hen would originate in China. It has undeniable aesthetic advantages, especially in terms of its plumage of rare beauty. Whether it is the dwarf breed or the large breed, it amazes and seduces young and old. This very old breed of hen doesn’t just look good at many shows: it is a big layer and an excellent brooder. She incubates her own eggs and those of other hens indifferently. Let’s find out more about the Silk Hen, whose character is as soft as its plumage.

La Poule Soie (formerly the Nègre-Soie hen) is of great beauty. Its plumage, which evokes fur or silk, is at the same time long, silky, supple, of an extreme delicacy while being well supplied. La Belle spends a lot of time perfecting with her beak the aesthetic aspect of her vaporous feathers. The Standards Commission adopted the name “Poule Soie” in 1999.

But with this customary hen at exhibitions, feathers are not the only ones at the origin of its old name, the Negro-Soie hen. Indeed, it has a black skeleton and the membrane that surrounds its flesh is also black, however its flesh is white.

The male is the ” Rooster Hen Silk “And the female, the” hen Hen Silk “Since” Poule Soie “is a proper name. That being said, let’s see what physically differentiates the male from the female. The head of the Poule Soie rooster is adorned with mumps and a caruncle or crest, and this inveterate tenor likes to give voice. As for the female, she has a crest so small that it goes almost unnoticed, and depending on the variety, a feathery barbel.

The Silk Hen has another unique characteristic that distinguishes it from many other breeds of hens: its legs have five fingers instead of four. 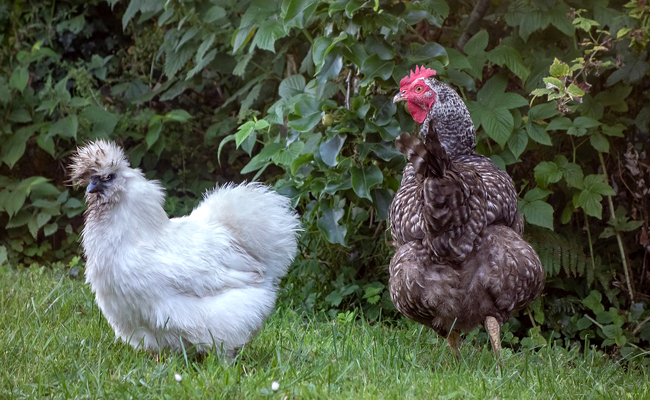 There is a Dwarf Silk Hen and a Large Breed Silk Hen. Each meets standards, namely:

La Poule Soie is marketed by breeders and some garden centers. It is also possible to buy this magnificent ornamental hen at an exhibition. You can afford a Silk Chicken for a budget of between 20 and 35 €.

La Poule Soie is endowed with a sociable character and a very appreciable sweetness. She lets herself be taken without blinking, and her behavior with children is excellent. As the Silk Hen does not fly, there is no reason to fear that she will escape from her enclosure.

In terms of longevity, she is well off since she can live happily until the age of 12. For her to live in good health for a long time, it is better to avoid installing her in drafts because she is quite cautious.

Poule Soie: the best conditions to welcome it

In town and in the countryside, the Silk hen is popular everywhere and is easily tamed. We can therefore raise it without difficulty as soon as we install a little corner of its own. It is important that it is protected from cold winds, and more generally from all types of weather. It is strongly recommended not to breed the Silk Hen with other breeds of hens or other animals if they have bad temper or are aggressive. Incredibly gentle, quite incapable of defending herself, the Silk Hen would quickly become a painkiller.