His braccoid-like physique, both powerful and robust, does not deceive his origins. From the old French Braque, the Braque de l’Ariège is a pointing dog recognized for its passion and exceptional flair. He can also be used as a family dog ​​provided that one knows how to deal with his strong character. 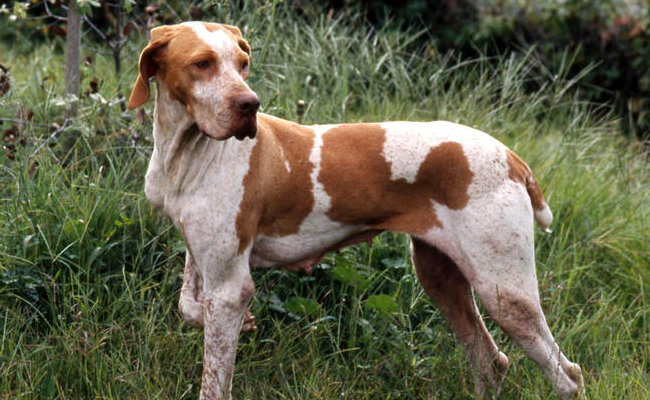 Characteristics of the Braque de l’Ariège

The Braque de l’Ariège is a so-called dolichomorph and dolichocephalic breed which develops a robust and powerful build without heaviness with a vigorous appearance. Ideally, he has well-defined lines, marked muscles and lean limbs. Large in size, this dog measures between 56 and 65 cm if it is a female and between 60 and 67 cm if it is a male. The weight varies from 25 to 30 kg. The Braque de l’Ariège is recognizable by its narrow, angular and long head. The skull is convex while the stop is little marked. The muzzle is straight and long and the nose with its well opened nostrils displays a reddish, pink or brown color. The wide open eyes, oval in shape and brown or dark amber color reveal a soft and intelligent gaze. The ears, for their part, are curled, long, relatively thin and attached to the line of the eye. The Braque de l’Ariège has a shiny, short and tight coat. The white coat is speckled with brown or pale orange fawn.

There are several hypotheses relating to the true origins of the Braque de l’Ariège. Some say he is a direct descendant of the former Braque Français, the Braque de Toulouse. For others, it would be the result of a hybridization between the French Braque and other orange and white pointers. A crossbreed which made it possible to obtain a lighter and more active dog for hunting activities. We know that the breed was very well known at a certain time so that Jean-Baptiste Oudry (1686-1755) decided to reproduce it in some of his paintings. Like many breeds, the Braque de l’Ariège also almost disappeared during the Second World War without the intervention of enthusiasts who even decided to create the Club du Braque de l’Ariège from 1990 for it. pay homage.

Necessary living conditions and behavior of the Braque de l’Ariège

The Braque de l’Ariège is a lively and docile breed that stands out for its independent nature and strong character. That doesn’t prevent her from being affectionate and gentle at the same time. He will enjoy playing in sporting families, because he needs the maximum amount of physical activity to fully develop. We also recognize in him a good playmate for children. Given his origins as a hunting dog, it is better to offer him the great outdoors and the great outdoors rather than living in the city in an apartment.

Diet and main health problems of the Braque de l’Ariège

The Braque de l’Ariège is a very hardy breed that is spared from hereditary diseases. He just needs a rich, healthy diet to stay healthy.

Price of a Braque de l’Ariège dog or puppy