Chronicle of qualifications in Mugello.

17:20 And this is where we end the online qualifications. It turned out not very eventful, and the ending was also spoiled by the reversal and departure of Esteban Okon. Let’s see what will happen in the race – you definitely shouldn’t miss it, because when will F-1 arrive at the gorgeous Mugello track! Start – at 16:10 Moscow time. Until!

17:15 Another very difficult pole for Hamilton, but you thought! Lewis (1st): “To be honest, it’s a very tough weekend. The track is phenomenal. It’s a very, very difficult track, and Valtteri was faster than me yesterday, this morning and even in the first segment. In the end, I couldn’t go faster, but the job was done. ”

Max Verstappen (3rd): “Personally, I didn’t expect to fight Mercedes. I think we are generally looking promising during this weekend, we managed to recoup after the failure at Monza. So yes, we can be very happy with the third place in qualification. It seems to me that the wind intensified in the third segment. But nothing can be done, these cars are really sensitive to gusts of wind. But it’s a pleasure to perform on this track ”

17:10 From the rest of the results, we note the good speed of Racing Point, Renault and Leclair, who helped Ferrari save face today. But Pierre Gasly, it seems, began to feel dizzy from success – today the Frenchman, who usually easily beats Kvyat in qualifications, lost to him and did not even get into the second segment. And talk of a return to Red Bull again seems premature.

17:05 Russian “formula” journalist Oleg Karpov let it down well results of the battle for pole: “It’s like becoming the best employee of the month again and again at McDonalds, where there are two employees. Your colleague is a nice guy, but he’s just … slow. ”

17:01 The fight for pole did not work out, but the maximum that could be expected was Bottas in first place instead of Hamilton. However, Okon’s departure did not allow Valtteri to show everything he was capable of today. Red Bull are still not fast enough to take on the champions, even in the hands of Verstappen.

16:59 Hamilton does not improve, but Bottas did not add – Lewis is again on pole! Verstappen the third, along with him in the second row Albon! Almost no one improved due to the departure of the Ocon and the yellow flags in the first sector, but among those who did it – Charles Leclair. He is fifth in Ferrari – for their current car, this is practically a victory!

16:57 Everyone drives out, except Cheko, three minutes before the checkered flag. Bottas still has a good chance to take the pole from his team-mate. But somehow you still don’t feel any tension.

16:54 Perez is good: immediately to fifth place, five hundredths faster than Stroll! The windows are still in the boxes.

16:52 Verstappen is followed by a gap of half a second ahead of Albon. Further Stroll, Riccardo, Leclair and Sainz. And only now Perez appeared on the track.

16:51 Only Okon and Perez have not yet gone for the first attempt – they clearly have one set of fresh tires. The rest are on the track, and the times are already showing: Stroll – 1.16.3, Sainz – 1.17.8. And Hamilton immediately breaks the track record – 1.15,144. Bottas lost 0.059, but Verstappen is far away – as much as four tenths to him from Lewis. It looks like the first non-Mercedes pole will not be this season.

16:43 Results of the second segment. Well, “Ferrari” at least did not fail – Leclair brought Vettel half a second on the aerobatic track and dragged the scarlet bucket into the top 10. Formally, Scuderia is today in a struggle to the very end.

16:40 It turned out that Kvyat made a mistake in the seventh turn, caught the gravel and lost a lot of time. It’s a pity.

Minus Norris, Kvyat, Raikkonen, Vettel and Grosjean. Move on.

16:36 Everything on the track, except for the top 5 (Mercedes, Red Bull and Riccardo).

And the leaders are probably doing the right thing: no one can improve by losing in the third sector! Vettel was able to, but still remained 13th.

16:33 Verstappen is very unhappy: Race Point mechanics have released Lance Stroll right in front of him into the pit lane! There may be a fine (for “RP” for release, not for Max for swearing).

16:30 Hamilton is 1.15.309, Bottas is slowest by 13 thousandths, and Verstappen is slowest by 0.162 seconds. Albon is fourth, but he is already six tenths from Lewis. Kvyat is one step away from the top 10, he needs to find two tenths to reach Norris.

16:27 Neither Mercedes nor Verstappen take any chances with the medium: all the riders have chosen the software for the Q2.

Franz Toast, meanwhile, said that Gasly had about the same settings as Kvyat – it was just that the Frenchman was not fast enough.

16:19 Gasly is not accelerating enough – he is 16th, the winner of the last Grand Prix does not qualify for the second segment! Together with him, Giovinazzi, Russell, Latifi (again behind his partner) and Magnussen fly out.

A good first segment from Kvyat is the 10th. For the second time this season, I retrained my partner, well done.

16:16 Bottas, Verstappen and Stroll, apparently, decided that they will go to Q2 anyway. The rest are on the track.

16:14 Surprisingly, Latifi is faster than Russell today. Maybe for the first time ahead of George in qualifying? Not a single teammate in F1 has ever won him on Saturdays.

Everyone is in the pits, preparing for the second attempt.

16:11 Leclair and Albon pushed Kvyat down, but Vettel is only 13th so far. The triumphant Italian Grand Prix Gasli is also not very fast yet: he is 16th and does not pass at the moment!

16:08 But the leaders are obviously faster: Bottas drove for 1.15.749, three hundredths faster than Hamilton. Verstappen is still lagging behind – half a second before the Finn. But Kvyat drove excellently: he is the sixth, behind only the top three and Racing Point.

15:45 But for pole position there will be others, and it may not be so easy for Mercedes: in order to avoid increased tire wear, the champion team heavily aerodynamically loaded the cars, which slowed them down a little, especially on the straights. Therefore, on fast laps, Max Verstappen from Red Bull rides with them almost at the same time – and maybe he will be able to take pole if he gets a perfect lap in Q3.

15:40 The Ferrari looked disgusting in Spa and Monza: the pilots barely got out of the first segment, turned around, got into accidents, got off and did not score a single point. Things seem to be going better in Tuscany: at least in Leclair’s hands, the scarlet car looks capable of reaching the top 10 in qualifying. This means that the glasses may finally appear. It’s high time – now Scuderia is in sixth place, and Alfa Tauri has only 17 points left to become the best Italian team of the 2020 season.

15:35 The Mugello is a very, very fast track, with almost no serious braking or slow turns. Racers like these tracks very much: once, after the F1 tests in Tuscany, Mark Webber said that in terms of the amount of pleasure 10 laps on the Mugello are comparable to a thousand on the Yas Marina in Abu Dhabi. But the fans are not sure that they will be happy: the aerobatics here looks cool, but there is practically no place to overtake – in high-speed corners for F1 cars there is only one trajectory. Therefore, today’s qualification will not only be super important, but also may be more interesting than tomorrow’s race.

15:30 Hello! After two legendary tracks in Spa and Monza, F-1 arrived at a completely new circuit for itself: today the qualification for the Tuscany Grand Prix will take place on the Mugello circuit. And this is not an easy stage, this is the thousandth race in the history of Scuderia “Ferrari”. We will follow all the main events of Saturday in this online. 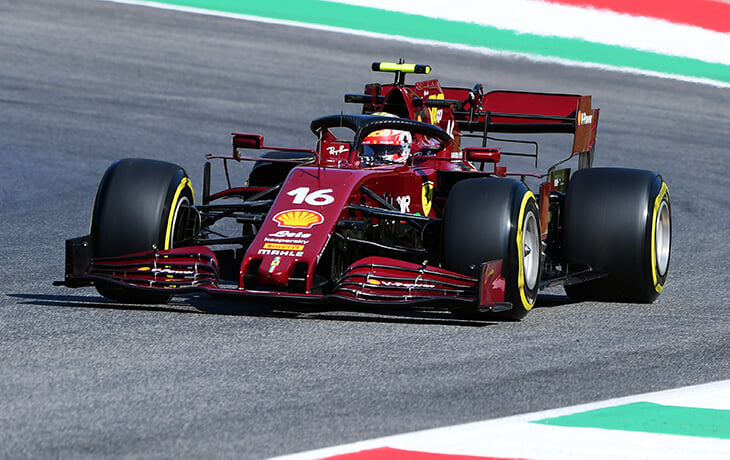 The qualification, which determines the starting positions of the pilots, consists of three segments.

After the first and second, 5 pilots with the worst results will finish the fight. In the third segment, the top ten will continue to fight for pole position.

The tires on which the riders show their best results in the second part of the session will be used at the start of Sunday’s race.