Although today they are mainly used in laboratories as subjects for various tests, house mice can also be very playful little pets, which will be able to tenderize young and old.

House mice are often referred to as white mice, although the latter can have coats of many colors. The so-called “white” mice are in fact only house mice with a nickname that can be misleading.

But how do you properly care for these small rodents that seem so fragile? This is what we will see in this article.

What is a house mouse?

House mice (Mus musculus) are small rodents belonging to the Muridae family (which also includes rats or gerbils for example).

These small animals are omnivorous, which means that they feed on foods of both plant and animal origin, and are diurnal (they live during the day).

House mice are gregarious and very organized animals. In the wild, they live in small groups in burrows to protect themselves from their numerous predators. These burrows have a network of tunnels, which lead to different rooms. Some are used as pantries, others as nurseries, etc.

Physically, house mice are very small, since they weigh only about twenty grams on average and only measure about 8 to 10cm, including the tail, the latter being the same size as the body, sometimes more . Their lifespan in captivity is around two years if properly maintained, and barely more than a year in the wild.

As said above, the color of their hair is very variable, it can range from white to black, passing through sand, gray or two-tone. There is a very wide variety of colors in house mice.

The house mouse in history

The house mouse is native to Asia although it is found today all over the world. It is also one of the oldest known mammals, since its presence on earth is estimated in the Tertiary area, that is to say 65 million years ago.

In the history of man, the mouse is also very present, since by the time of ancient China or Japan, it was already domesticated as a pet, even if it often ended up on human plates. .

During ancient Egypt also, mice were kept in captivity because, according to Egyptian beliefs, mice were carriers of good fortune, even supernatural powers.

In Europe, mice have long been a part of folklore. Although hated for their harmful side, they are adored for the stories embroidered around them, we will find some in tales, fables, and even today in cartoons or movies. 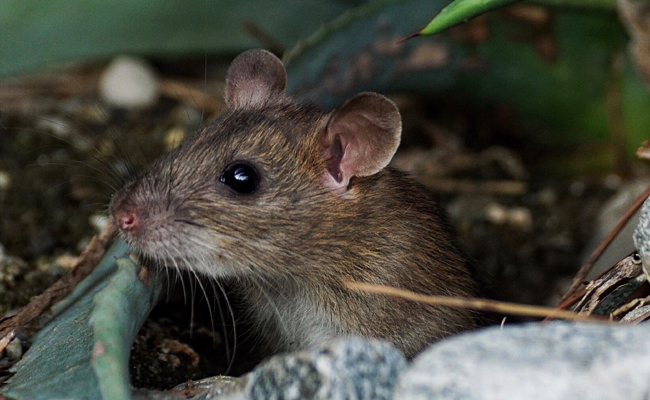 Caring for a house mouse at home: good practices

The house mouse is one of the easiest rodents to maintain, so it would be the most recommended rodent for a person new to the rodent world.

The habitat of the house mouse

The habitat of the house mouse is not so restrictive, since it will require much less space than a guinea pig or even a rat. Be careful, this does not mean that she can live in a shoebox, she will need a place to live adapted to her needs.

It will therefore be necessary to adapt according to the place in which it will live. If the temperature of the room is rather high, it is better to opt for the cage, otherwise, it is better to go to the aquarium. Size level, you will need a minimum of 60×40 (width x depth).

Finally, if you have an animal that might want to make your mouse four hours old (a cat or a dog), avoid placing it in a room accessible to the latter.

The bottom of the cage (or aquarium) should be lined with litter, such as wood chips or hemp litter (the latter having the advantage of being much less dusty than the first, but with the disadvantage of less heat retention), and changed once a week.

In the cage, you will need a bowl for food, a wheel for her to exercise, a bottle of water or a bowl of water (prefer a bottle, which will have the advantage of keeping the clean water, thus preventing the mouse from blowing litter or poop into the water), as well as a small wooden toy to make its teeth (if the wood comes from nature, disinfect the beforehand by immersing it in boiling water).

Social behavior of the house mouse

The house mouse, as said above, is a gregarious animal, which means that it is not used to living alone. You will therefore need to take at least two, and preferably of the same sex, especially if you are a beginner in the field. Indeed, mice reproduce very quickly.

As for the behavior of mice towards humans, you will need to be patient. While a mouse can be very docile, it won’t be from the start. You will therefore have to take several moments a week, during which you will get her used to you. Start by placing your hand inside the cage, and let it come. By dint of exercises, it will end up walking on it, then on your arm, on your shoulders, etc. You just have to be patient, and make her understand that you are not a danger to her.

Food for the house mouse is also not difficult to find, since most unroasted and unsalted dried fruits (almonds, hazelnuts, walnuts, sunflower seeds, etc.) are suitable for it. Suitable seed mixes are available in the vast majority of specialist stores.

In addition, you can also give her a small amount of fruit (avoiding citrus fruits, which are too acidic for her) or vegetables.

In case of pregnant female or having given birth, a protein intake will be beneficial. You can then give him cat food.

Contrary to popular belief, even if they do love it, avoid cheese, which is usually too salty and causes kidney problems.

The reproduction of the house mouse

A house mouse is able to reproduce at around 45 days of age. She is able to make 4 to 8 litters per year, each with 6 to 12 young, during a gestation period of 21 days. She will then nurse the mice for three weeks.

It is very important to pay attention to the sex of the mice you adopt, given the number of young that a couple is able to produce per year. The young, for their part, must also be separated, since once sexual maturity is reached, the young are quite capable of reproducing between brothers and sisters.

As you will have understood, this can quickly get out of hand, so pay close attention to the gender of your mice who share the same cage.