The beaver is a semi-aquatic rodent very present in France, from Verdon to the banks of the Loire, from the Rhône Valley to Île-de-France, where we were able to observe its reappearance in 2018. This great builder spends his life furnishing and refining his hut so that he and his family will be well settled there. Let’s discover the way of life of this true example of tenacity which, at the dawn of the 20th century, was on the verge of extinction, and which we can happily observe today in many regions of France.

The European beaver, Beaver fiber, belonging to the family of Castoridae, is also called Eurasian beaver, common beaver or simply beaver. Castor is also the name of the genus to which the last two species still living belong:

It is a herbivorous mammal and a semi-aquatic rodent which can weigh up to 30 kg and reach a length of 120 cm. The male is generally less heavy than the female, but there is no particular sexual dimorphism in beavers. 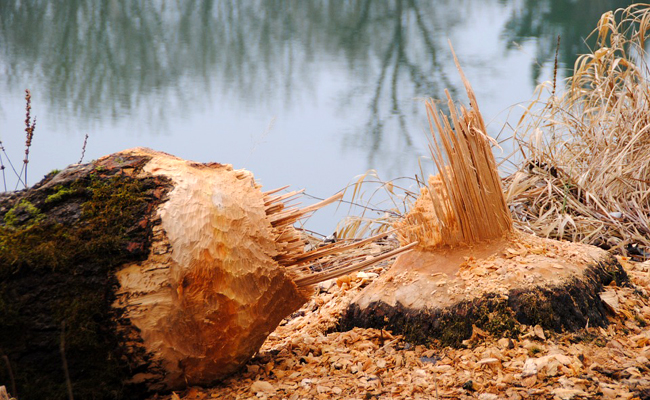 The beaver is an engineer obsessed with building his place of life. For this, nature has endowed it with two rather exceptional characteristics:

An excellent swimmer, he has perfectly waterproof fur, webbed feet, and its long flat tail so special is covered withscales.

Quite clumsy on dry land but very agile in an aquatic environment, the beaver likes to settle on a high bank planted with trees and located not far from an open area. He can therefore take up residence at the edge of a stream, a slow river, a marsh or a lake, as long as he has sufficient water deep to allow him to swim easily.

It is thanks to his many physical attributes and his willpower that Beaver fiber attacks trees like a real lumberjack, whether for food or to build huts and dams, these can reach two meters in height. His strength and will allow him to cut down a trunk 10 cm in diameter in less than thirty minutes.

With astonishing determination, he builds again and again … a pantry under water, a floating nest, a hut which dominates the watercourse and hides the entrance to the territory, a underground lodging with ventilation chimney and raised floor where you can sleep in a dry place. This perfectly designed and organized home is also accessible by a tunnel several meters in length. It is almost beyond the reach of beaver predators such as red foxes, brown bears and wolves. It is with the castoreum – a secretion with a musky odor – that the beaver marks its territory.

This herbivorous feeds mainly on plants (leaves, roots, aquatic plants). It also eats the bark of trees, especially alder, aspen, willow, and work because their wood is soft. This is what constitutes the almost essential food of the beaver in winter, when leaves and aquatic plants are scarce. In order to feed his family throughout the off-season, he stores tens of cubic meters of branches at the bottom of cold water, which he wedges with large stones. This constitutes a diet rich in fiber and cellulose.

And when the temperatures are extremely low, the beaver enters the lethargy. Its fat reserves then allow it to subsist until the weather conditions become milder.

The beaver is a monogamous rodent with a very developed family spirit. Faithful, a pair of beavers are formed for life and raise their young with love. After a gestation period of between sixty and one hundred and twenty days, the female beaver gives birth to no more than three cubs whose maximum birth weight is around six hundred grams. The mother feeds her babies for six weeks, but they must wait until they are two years old to reach sexual maturity. Throughout this period, the little beavers stay with their parents very attentive to their offspring. Once they become adults, they leave the family environment.

In its natural environment, the beaver hardly lives more than 8 years, yet it can reach about 15 years if it lives in excellent conditions.

Outrageously hunted for its pretty fur, the European beaver has almost disappeared, then gradually returned to our national landscapes. During the last century, the river basin of the lower Rhône valley has been naturally recolonized while successive reintroductions of beavers were carried out in twenty-six French locations. Thus, from barely a hundred specimens, we have grown to more than fifteen thousand beavers in a hundred years in our country.

The National Hunting Office was entrusted with beaver surveillance in France by the Ministry of the Environment, in 1987. This allowed us to better understand the evolution of the species in order to find solutions for:

This observation greatly facilitated data collection, particularly in view of the presence of the beaver on the various colonized French rivers. All the clues that made it possible to estimate the degree of presence of this semi-aquatic rodent were reported on a IGN map which can be consulted on the official website of the National Office for Hunting and Wildlife (ONCFS).

Where to observe the beaver in France?

The beaver is mainly present in the departments of central France, the south-east and the north-east. Loire, Rhône, Saône, Tarn, Alder, Meuse, Rhine and some tributaries are more particularly frequented by this large rodent which seeks pure water.

The European beaver is a protected animal – just like its habitat – by decree of April 23, 2007 of the Environmental Code.

For observe the beaver, it is necessary to take certain precautions in order not to disturb it. Discreet, he is also extremely suspicious, and does not place great trust in the man who has chased the animal to the point of making it almost disappear. However, the beaver can easily set up its home not far from inhabited areas, but it is essential to be respectful, patient, and to arm yourself with binoculars to observe it discreetly.

Today, it is present in nearly fifty French departments. During morning walks, it is possible to spot the traces that it leaves in its passage, in particular with its flat tail which smooths the sand of the banks of rivers, or the grass covered with dew.