A brilliant pointer, the Braque de Burgos is known for its resistance, its hardiness and its versatility. Also distinguished by its athletic and elegant appearance, the breed is unfortunately endangered today. 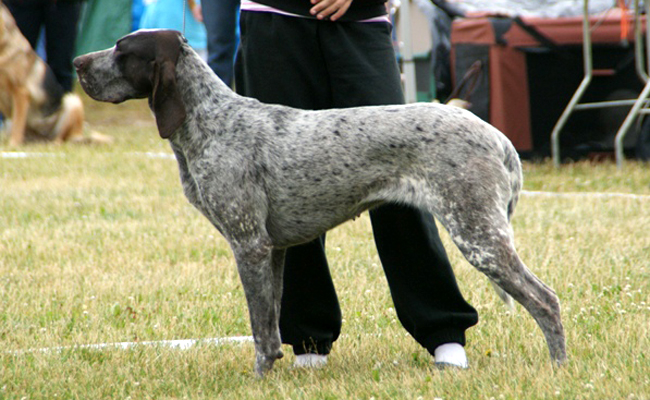 Characteristics of the Braque de Burgos

The Braque de Burgos is a large dog measuring between 59 and 64 cm if it is a female and between 62 and 67 cm if it is a male for a weight of around 23 to 32 kg respectively. The dog develops an agile and powerful body which can be inscribed in a square. In addition to a dynamic look, it stands out for its harmonious silhouette and its massive and solid construction. The dog is recognizable by its massive head adorned with drooping and abundant lips. The skull is strong, broad and convex while the stop is gently sloping and little accentuated. The medium sized eyes are almond shaped and are hazelnut in color. They express sweetness with a touch of melancholy or even sadness. Triangular in shape, the ears for their part are long and pendulous. The Braque de Burgos has a smooth, short, tight and rather dense coat. The standard tolerates dresses with a white or liver-colored base associated with brown or black hairs and dark markings.

The Braque de Burgos has its origins in Spain and has been known there since the 17th century. The truth is, not much is known about your actual affiliations. Coming from a very old breed, he was born from a cross between several pointers found in Europe. This breed has mainly found its way in the work of pointer of small game with feathers or hair. It almost completely disappeared during the Spanish Civil War without the intervention of a few enthusiasts. Even today, the population of Braque de Burgos remains modest, so much so that it is threatened with extinction. In 1950, its official recognition by the FCI (Fédération Cynologique Internationale) became effective.

Necessary living conditions and behavior of the Braque de Burgos

In hunting activities, the Braque de Burgos shines for its ability to work on all terrains, its resistance, its exceptional sense of smell and its endurance. As hunting activities are less common, he has converted into an agile pet and very attached to his master. Cohabitation with humans and other animals should be no problem as long as the dog enjoys a good education and excellent socialization. Since he is a great athlete, he is not made for sedentary people. We are thinking here in particular of the elderly. Urban life, especially in a confined apartment, is also not made for him. He needs the great outdoors and space to be happy.

Diet and main health problems of the Braque de Burgos

The Braque de Burgos is a large dog and can therefore be affected by hip dysplasia. This disease develops because of too intense physical activity, too fast growth and too rich a diet. Hence the importance of monitoring your daily rations and the quality of your food.

Price of a Braque de Burgos dog or puppy