If your child wants to practice horse riding in his spare time, the ideal is to promote his initiation to this very popular and popular sport, thanks to the pony. Reliable and gentle, much smaller and less impressive than a horse to reassure the youngest, the pony lends itself perfectly to the discovery of riding by children. There are several breeds, some of which are particularly suitable for children and able to promote their discovery of horse riding without fear.

We have scrutinized two breeds of ponies whose qualities lend themselves to the practice of horsemanship by the youngest and by the beginners without apprehension and in all confidence.

The Shetland pony is one of the smallest equines in the world and is part of numerous breedings in all countries, especially in France. They are heavily represented in many pony schools for children with whom they are very popular and for which they are the ideal mount.

This British pony has been around since the Bronze Age and is believed to have been crossed with Norwegian ponies. This pony owes its name to the Shetland Islands of northern Scotland where it originates and where it was actually discovered. First exported only to Great Britain, it is used for work in the fields or for making clothes thanks to the quality of its hair. At the end of the 19th century, because of his size and physical strength, he took the place of children for work in the mine where he was assigned to transport coal.

Finally, it ended up being popular around the world from the twentieth century thanks to the emergence and development of horse riding. The Shetland pony then becomes a full-fledged leisure animal, especially intended for children thanks to its small size. When to its unfailing strength, it makes an excellent recruit for the team.

Robust, the Shetland pony is extremely resistant to cold and fatigue. Small in size, the standard adult measures around a meter at the withers but there are smaller ones. The breed is divided into 3 categories depending on the size of the ponies:

The Shetland pony has a small round head, a round body as well as very muscular. His coat can be any color except Appaloosa and he comes with a dense mane and coat requiring regular grooming to the delight of children who can then approach horseback riding starting with a positive first contact and a privileged relationship with the animal.

Gentle, kind and patient, the Shetland is the favored pony of riding schools and clubs and he is also very present in baby pony as well as for the team. Very popular with children, it allows them to learn the discipline without fear and without risk because it knows how to put them at ease. 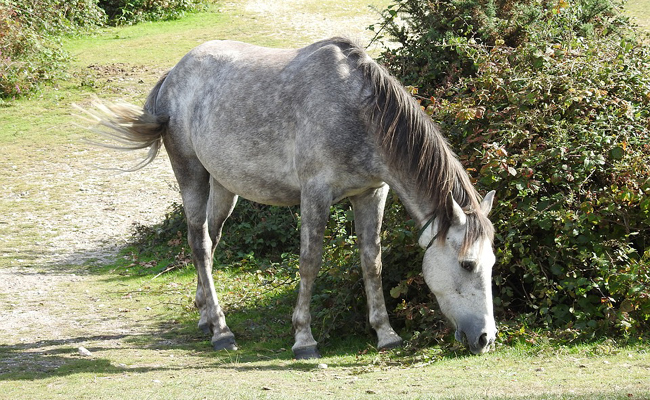 The New Forest pony was first of all very present in the farms of Berry and Normandy, then, subsequently, its popularity spread to other regions. This pony is remarkable for its versatility. He is able to work with adults, participate in competitions or competitions and perform well in many equestrian disciplines. Nevertheless, thanks to his excellent character, he is also the ideal pony for children with whom he is extremely reassuring and reliable and to whom he gives the opportunity to learn riding with confidence.

The New Forest pony comes from the south of England, in the New Forest region where its name comes from, but its origin dates back to the Ice Age where its ancestors lived, the Celtic ponies. It has been crossed many times with English ponies (Welsh, Highlands) but also Arab and thoroughbred, but it has however retained its original characteristics.

The New Forest Breeding and Cattle Society, which created its own studbook (breeding register) in 1960, managed the New Forest pony. From then on, the ponies of this breed began to be exported internationally, all over the world, including France which officially recognized it at that time, after England at the beginning of the century.

The New Forest measures approximately between 1.20m and 1.50m at the withers. Robust but light, it has an elegant look and a rather long neckline. Well built, but while remaining fairly light, it wears a rectilinear head and most often a bay or gray coat, sometimes chestnut or black.

The New Forest has a unique character. He is remarkably intelligent, shows great kindness and adores company which gives him certain advantages for being one of the privileged ponies of children. In addition, it shows incredible versatility thanks to its strength and dynamism. Also, not only is it the favorite of equestrian clubs and equitherapists for its softness, but it is also very popular during Pony-Games, not to mention that he also excels in all kinds of equestrian sports, from show jumping to polo to cross country.