The bedbug is a very common insect, but it has the unpleasant habit of secreting a foul odor, especially when it feels threatened. Not all bedbugs are parasites and some are even real allies in our vegetable gardens. Find out who the bedbug is, why it smells so bad, the damage some can cause, and natural ways to deal with it in this comprehensive review!

Who is the bug?

When we talk about bedbugs, we should rather say bedbugs, because there is not only one kind, but on the contrary nearly 30,000 species! In our regions, we mainly meet the green wood bug (Palomena prasina), green in summer and brown in autumn, as well as the gray bug (Rhaphigaster nebulosa), gray-brown in color. These two species are completely harmless. However, another green bug (Nezara virudula), with white spots on the back, can cause serious damage in vegetable gardens.

The bug is approximately 1 to 1.5 cm long. It has three pairs of legs and two pairs of wings. Its head has two rather long antennae and a bite-sucking oral apparatus. It feeds on the sap of plants, but without impacting flowers, fruits and vegetables, except in the case of the green bug (Nezara virudula), capable of destroying crops.

The bug reproduces by mating. The female lays small green eggs which she places under the leaves and which hatch after two to three weeks. The larvae will then have to wait five to six weeks to become adults.

These common bugs live in our gardens, in parks, in forests, in green spaces, but also in the cracks in the walls of our houses. When autumn arrives, they seek to protect themselves from the cold and very often enter our interiors. Their presence is unpleasant to us, but they do not present a danger to humans, unlike the bedbug (Cimex lectularius).

In addition, bedbugs are equipped with scent glands, those famous little pockets that produce their famous and unpleasant bad smell. 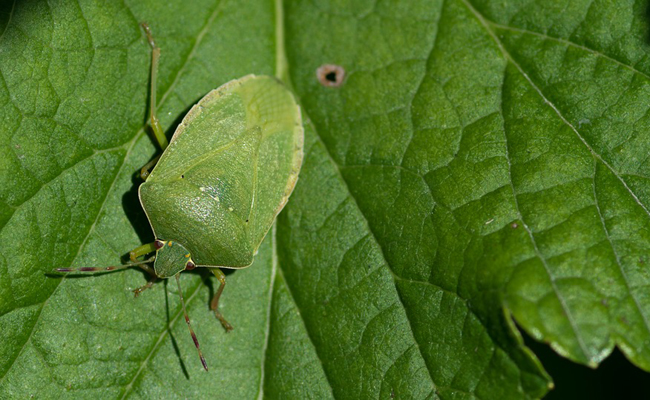 Why does the bug smell bad?

The bedbug stinks only when it empties its famous scent glands. However, these are only useful to allow the insect to defend itself by emitting this repulsive odor. However, you should know that these smells are much more complex than it may seem, because they are made up of different molecules that are used to broadcast several types of messages. Indeed, the bedbug can “stink” to repel an aggressor, but also to attract and stimulate a partner at the time of reproduction or to gather the young in order to protect them when an attack is imminent.

To secrete these odors, the bug has glands that produce chemical compounds (including aldehydes and acetates) synthesized by the insect according to its needs or taken from the plants on which it feeds. The bug then releases them at the level of its thorax to spray its predator. This effective mode of protection is an additional way to protect themselves from attacks, in addition to their color which allows them to easily hide in their natural environment. However, bedbugs do not always manage to repel their predators and can sometimes, by spraying them, help them locate them more easily.

What damage does the bedbug cause?

As we said, the most common bedbugs don’t cause any damage to your garden. In contrast, the green bug (Nezara virudula) attacks vegetables (tomatoes, peppers and eggplants in priority) and fruits (mainly apples and pears). It feeds on the flower buds of vegetables, causing them to dry out and injects toxic saliva which denatures the fruit and compromises its conservation. The vegetable bug (Eurydema oleracea), red and black, is a devourer of vegetables and likes to extract the sap. As for the red cabbage bug (Eurydema ornata), also red and black, but larger, it tends to sting cabbages and potatoes, which leads to wilting of the plant and slows its development.

On the other hand, do not chase the gendarmes, who also belong to the bedbug family. Even if they are also black and red, avoid confusing them with the latter, because they are on the contrary harmless and precious allies for your garden!

How to get rid of bedbugs?

When bedbugs invade the house or garden, we all want to get rid of them, especially since approaching them tends to stress them and cause them to secrete their bad smell. Here are our natural tips for driving them off your property.

Getting rid of bedbugs in the house

Bedbugs begin to invade homes in the fall and into early winter, as they seek to protect themselves from the cold. They won’t hurt you, but their presence can be disturbing and your pets can experience the bad smell when they get too close.

To prevent them from coming to your home, don’t just let them in! To do this, check the condition of your seals around your openings and fill in any spaces in which they may interfere.

No need to use insecticides to overcome them because they are not sensitive to them. However, these products are toxic to you and your pets. However, be aware that bedbugs do not like the smell of white vinegar and lemon! So do not hesitate to use it around your doors and windows.

If some still manage to get in, block them in a pot or box, slip a piece of paper under them and release the insect outside.

Getting rid of bedbugs in the garden

It is difficult to drive bedbugs out of your garden. Some are harmful, as we have seen, but others are on the contrary very useful and participate in the good balance of your exterior by eating aphids and caterpillars. Avoid any chemical product, which will be of no use and which will prove to be above all dangerous for you, if you want to protect yourself from them that much.

On the other hand, you can try to prevent their coming when they are still few in number by checking the underside of apple, pear and cabbage leaves and your tomato, eggplant and pepper plants to eliminate the eggs deposited by the females.