Of all the birds that can be reared in cages, the canary is certainly the most famous. He is also very popular with children for his good humor and his playfulness. In addition, all the children one day marveled at the pranks of “Titi et grosminet”, featuring a cat and a canary.

Owning one in a cage can be attractive, it is small, does not take up much space, sings and brings joy to a home, but be careful though, since canaries are rather fragile birds, and it is better to be informed. before adopting this little bird.

What is a canary?

What is commonly referred to as a canary is actually the domestic form of the Canary Island Serin (Canary serinusa) which, as the name suggests, is from the Canary Islands. A canary is a bird of the order Passeriformes, the order containing the most different species of birds (we find for example the sparrow).

It is a mainly grain-eating bird, with a small frugivorous tendency, since it measures between 12 and 20cm long on average. Its colors can be very variable. Indeed, we can find yellow canaries (the most famous), but also varieties of white, orange, two-tone, pink-red, gloster (color similar to the colors of a sparrow), etc.

This small animal is capable of turning between eight and ten years in captivity, although some specimens have lived for twenty years.

Since ancient times, the canary has been a domestic animal and, historically, it has been used very little by humans except in coal mines. Indeed, we locked a canary in a cage that we lowered into the mine, with the miners. The bird was then used as an alarm system since toxic gases such as carbon monoxide or carbon dioxide contained in mining deposits were fatal for the bird, long before acting on humans. When the canary fidgeted in its cage, it meant that a poisonous gas leak was taking place, and that the men had to get out of the mine urgently.

Nowadays, canaries are observed in the laboratory to study their complex mode of communication, or in nature as an environmental indicator, since this little bird has the ability to detect nearby environmental dangers, causing it to flee its habitat. natural, which allows scientists to anticipate potential disasters.

Maintaining a canary in captivity

The habitat of the captive canary

The canary, like all birds in captivity, will need a cage, which will act as a habitat. The cage must be at least 60cm long, 40cm wide and 50cm high for a single canary. To accommodate two individuals the minimum will be a cage 90cm long, 40cm wide, 50cm high. 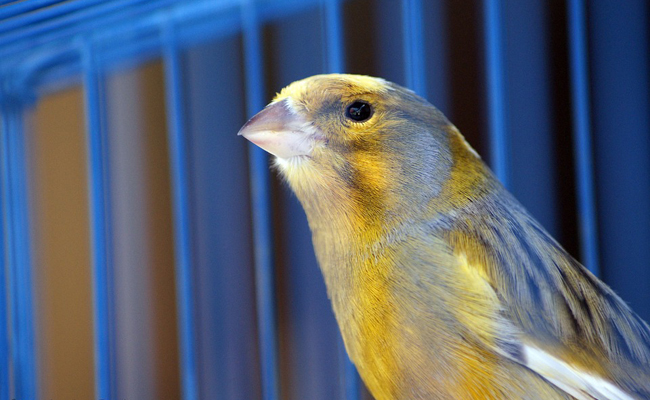 The interior of the cage will of course have to be arranged. He will need several perches so that he can rest and observe his environment, but also a drinker, a feeder and small toys to hang so that he can occupy himself.

There are several ways to arrange the bottom of a canary’s cage, all of which have their pros and cons:

The canary will particularly appreciate having a bathtub in his cage, the water of which will be changed every day with water at room temperature, because indeed, the canary loves to take baths. It will not be rare to see him splashing around in the water, singing to clean his feathers.

Finally, the location of the cage will be very important. The cage should ideally be placed high up, because the canary loves to observe what is happening around him, while feeling safe. It will be necessary to avoid placing the cage in full sun, because the fragility of the canary does not allow it to withstand strong heat for too long. Placing the cage in a room that can receive regular drafts is also a very bad idea for the health of this little bird.

The sociability of the canary in captivity

The canary is an animal that will need life around it to be happy. If the house he is in is regularly empty, he will quickly lose his zest for life and allow himself to waste away, even if he is properly fed.

If, however, you are away a lot, it is still possible to adopt a canary, but you will need to take two so that they can keep each other company (of course by adapting the size of the cage to avoid any conflict). If you want to avoid too intense breeding, do not choose a pair as the male will risk sexually harassing the female to the point of killing her from exhaustion. Better to opt for two males or two females knowing that only the males sing: you are thus warned if you want a song canary or, conversely, as much calm as possible.

Feeding the canary in captivity

Feeding a canary in captivity is pretty straightforward, since suitable canary seed mixes that can be found in most pet stores are perfect for them. You can also provide them with food supplements, such as small pieces of apples, pears, bananas, or salad leaves.

However, avoid any processed food that is too sweet (for example chocolate or industrial cakes), which are very bad for their organism, to the point that it can be fatal for them. 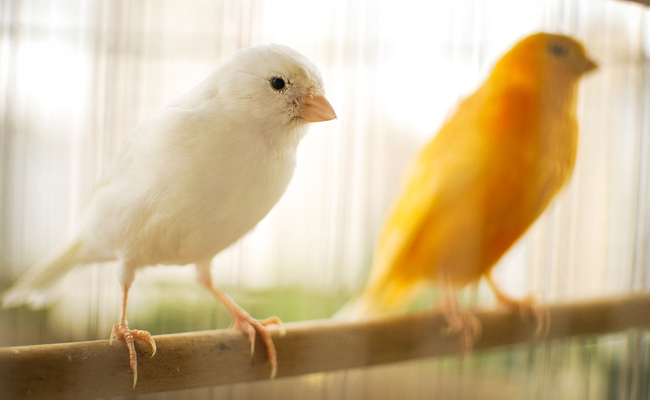 The reproduction of the canary in captivity

From February, the mating season begins for canaries. If you have a couple, you can start placing plenty of straw and hay in the cage so that they can build a nest. It is also possible to buy them an artificial nest to be fixed directly in the cage.

The female, once fertilized by the male, will lay two eggs; the second starting about 40 days after the first. It will therefore be necessary, from March, to maintain a temperature of around 20 ° C in the room, as well as a good level of humidity in the air by placing a water pan on the radiator for example.

Once the laying has started, the female will lay one egg per day, often in the morning, until it reaches three to five eggs. She will incubate her eggs for 13 days. Giving breeding mash to the female is recommended so that she regains the energy she lost during the laying.

Once hatched, the young will be fed most often by the father who will give them the beak, while the female will take care of cleaning the nest. The chicks will start to leave the nest around 20 days old, and will be completely weaned when they are 30 days old. The young will have to be taken out of the cage before the start of the second laying, otherwise they will be rejected, and sometimes killed.