A nocturnal rodent, the chinchilla belongs to the NAC (New Pets) family and has been extremely successful for the past fifteen years. It is a gentle and calm animal that needs very special attention and precautions.

A rodent with very thick fur

Domestic and wild chinchillas have almost the same morphology. They are 35 cm long at the most and have a tail of 20 cm. Their maximum weight is 800 g. The chinchilla has a triangular, massive head that has two large, round, movable ears with little hair. He has round, black and large eyes. One of the peculiarities concerns its fur which is very dense. Indeed, if a hair has a follicle in humans, in chinchilla, it has up to 50 follicles. Moreover, for centuries, this rodent has been hunted for its fur. It uses its coat as a defense mechanism. When manipulated to excess, it loses its hair, as if to escape its predators.

What habitat does chinchilla need for its well-being?

In the house, the chinchilla must live in a cage, preferably metal with vertical bars. Wood materials such as fir, oak or worse, plywood, which has adverse effects on the health of the rodent, should be avoided. It is advisable to equip his cage with various accessories so that he can climb, climb, jump, in short, exercise. Namely, originally, the chinchilla comes from South America including the Andes cordillera. It mainly evolves in very arid territories.

How to take good care of a chinchilla?

Chinchillas should be installed in dry, cool places, protected from humidity and drafts. Even if they come from originally temperate places, they do not tolerate heat stroke. It is also a very fragile rodent. It is strongly recommended not to squeeze it hard and touch it too much. Strangers should not handle it, because it will get scared and like lizards, it can even lose its tail. Changes of place of life and habitat are also not recommended. The animal will have difficulty adapting and will develop some form of stress. 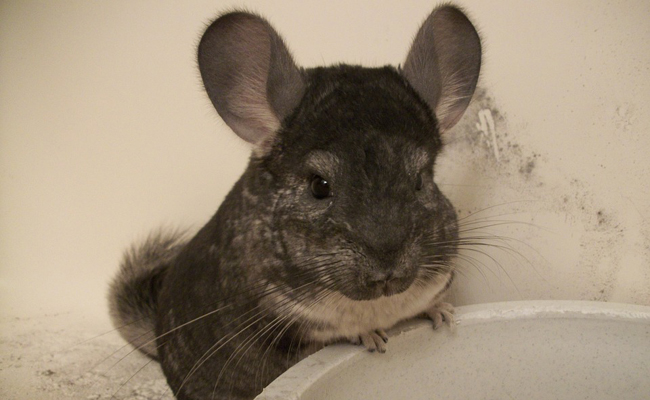 An animal fond of pellets

Chinchillas can quickly succumb to bowel problems. It is therefore crucial to ensure a balanced diet, preferably full of fiber. He will appreciate the pellets, but they will have to be of the same type so that the rodent does not sort. In addition, foods requiring prolonged chewing will be required so that he can use his constantly growing teeth. They should also be organic whenever possible, since chemical fertilizers and pesticides can make it sick.

The chinchilla can be the victim of a number of diseases to name only dental problems, stomach problems, parasites as well as yeast infections that develop in the genitals, ears, eyes or around the muzzle. . He also easily loses his hair due to poor nutrition or acute stress.