We would easily confuse it with the sphynx with the difference that the Devon Rex is provided with hair. His very singular appearance has made him the preserve of some real cat lovers. This energetic breed needs to be properly educated, otherwise, the animal risks destroying everything in your home.

Characteristics of the Devon Rex

Semi-tobby type, the body develops a certain musculature and firmness. The cat is not very tall and is rather thin. Its bone structure as well as its legs and tail are thin. The oval feet are also small. The Devon Rex has an atypical facies which makes all its particularity. His head is conical and is not at all proportional to the body since it is small but his prominent cheekbones do not go unnoticed. This contrasts with the ears and eyes which are large. About the ears precisely, they are triangular and open at the base.

Another distinguishing feature of the Devon Rex is its sparse fur. These should be wavy or form waves. The chest or the belly in particular display fine hairs but which are thicker on the tail, the back or the head. Regarding color, apart from amber, the standard accepts all shades. Be careful, however, of the too bare parts which are sanctioned. 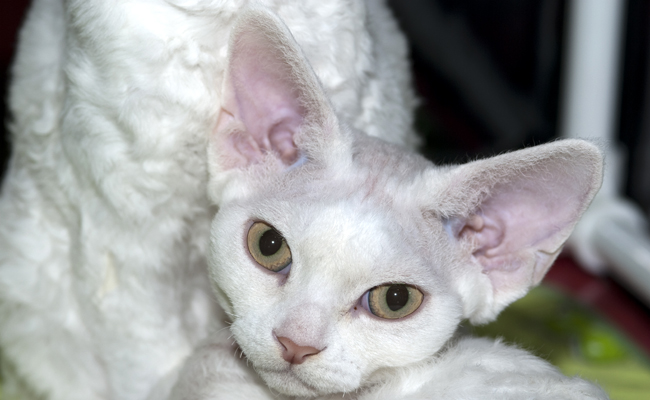 History of the Devon Rex breed

The Devon Rex is a recent breed. Its story begins in 1960 when Beryl Cox crossed a street cat with a domestic cat. She got a very singular kitten named Kirlee who had large ears and wavy hair. The latter will be given to a cornish rex breeder to develop a new breed. The result was not that expected since the kittens resulting from the crosses had a normal hair and not curly. The program continued until the discovery of a gene, that of the Devon Rex. This breed will be recognized in 1968 by the International Feline Federation. 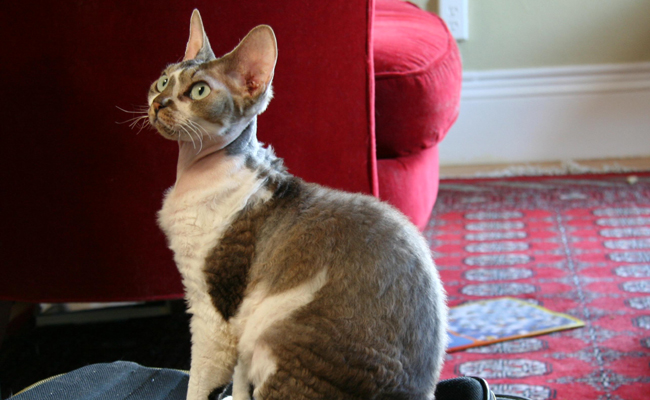 Necessary living conditions and behavior of the Devon Rex

Despite his shy demeanor, the Devon Rex is actually a naughty, mischievous and very playful cat. He is also very social and can appreciate someone very quickly. He will not be asked to come and jump on your shoulders because he is very playful. He really likes the presence of his masters and elsewhere, he is a real cuddler. He will not miss an opportunity to snuggle up in the arms of his owners and stay there. Loneliness therefore frightens him. It is also not difficult in terms of the environment in which it operates. He can live in an apartment as well as a house. 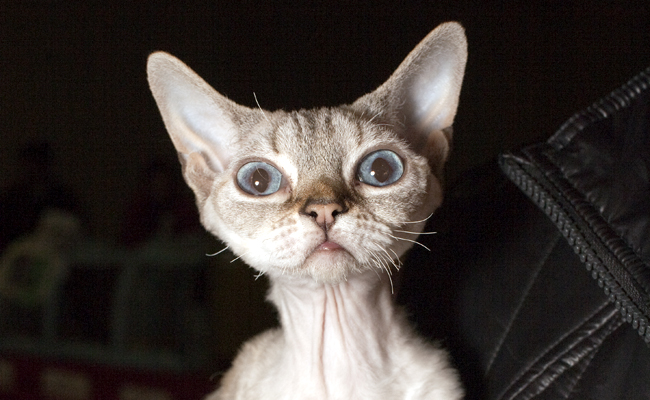 Diet and main health problems of the Devon Rex

The Devon Rex can live up to 16 years. But as it is a recent breed and inbreeding has been widely practiced in its development, the Devon Rex is a victim of hereditary diseases such as myasthenia gravis or patellar luxation.

When it comes to food, be careful because this great gourmand is insatiable which can play bad tricks on him and cause intestinal disorders.

Price of a Devon Rex Cat or Kitten