Imposing hound and flawlessly solid, the Argentinian Mastiff is an excellent guard dog and a good pet. He will know how to evolve without problem in families and will delight children with his affectionate and balanced character.

Characteristics of the Dogo Argentino

Belonging to the Molossoid family of the “mastiff” category, the Argentinian Mastiff impresses with his harmonious body and strong musculature. He has a head that allows him to brilliantly fulfill his role as a hunting dog. Indeed, it has a convex skull due to its highly developed masticatory muscles which ensure a powerful bite. Almond eyes are dark and can be brown or black. In the male, one can see a hard and lively expression. The ears are drooping and carried high. They are widely spaced because of the imposing skull.

In terms of the coat, it is short and smooth. In principle, the dress should always be white with black markings surrounding the eyes. 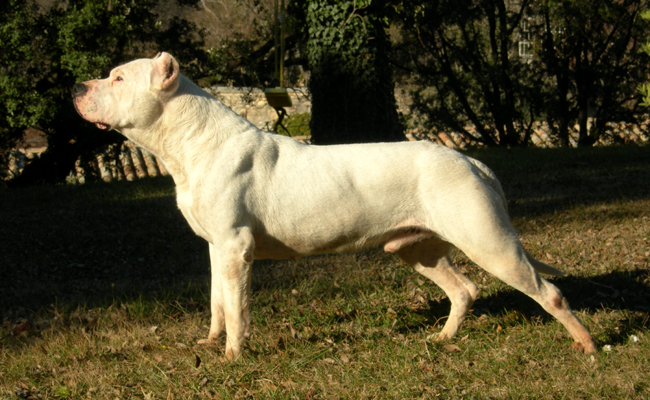 History of the Dogo Argentino breed

The Argentine Mastiff has for ancestor the Perro de Pelea from Córdoba. He was born under the impetus of Antonio Nores Martinez in 1928. The latter wanted to obtain a dog so powerful that he would be able to hunt puma and wild boar. The selection begins with a cross between a Perro de Pelea and a bull terrier. Other hybridizations have been carried out with other breeds, in particular the Pyrenean Mastiff, the Dogue de Bordeaux, the Boxer and the Mastiff. It will take several generations before obtaining a pure breed that will be recognized by the official authorities. 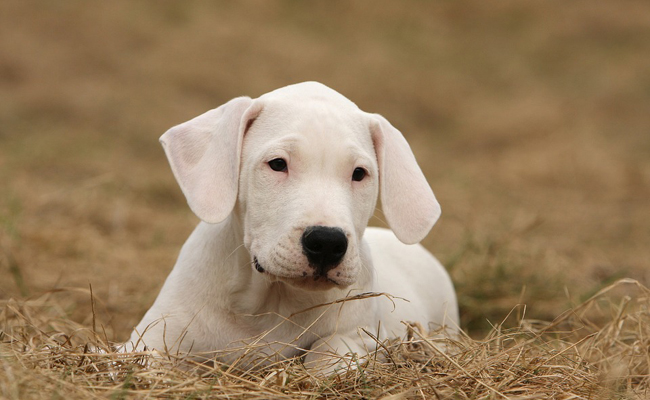 Necessary living conditions and behavior of the Dogo Argentino

If in principle, the main function of the Argentine Mastiff is to practice hunting activities, the types of hunting and the territories in Europe are unsuitable for it. This is why he will be more in demand as a guard dog or defense dog. This animal is a model of devotion, courage and intelligence. He expresses a lot of joy, is easy-going and remains discreet. He is a good companion dog for children. There are a lot of misconceptions about his so-called aggressiveness. But it all really depends on the education he received. This dog enjoys good psychological stability. On the other hand, to be happy, he must be able to do as much exercise as possible. Remember that this is a hunting dog. He needs to work out to be comfortable.

Diet and main health problems of the Dogo Argentino

To avoid being a victim of the consequences of inbreeding, the Argentinian Mastiff has been the subject of multiple crosses which have contributed to its robustness. Strength and genetic diversity are the particularity of this animal which is not subject to specific health problems. However, the gene for the white color of her dress can cause deafness. Screening should be done in the 12th week of the animal. And as far as his diet is concerned, it must be rich since the dog expends a lot. Two daily rations of good quality kibble are recommended.

Price of an Argentinian Mastiff dog or puppy