A very friendly looking dog from Scandinavia, the Drever is a tenacious and passionate breed that excels at hunting. It is also possible to offer him a companion role at home, provided that he can satisfy his needs for outdoor activities and outings. 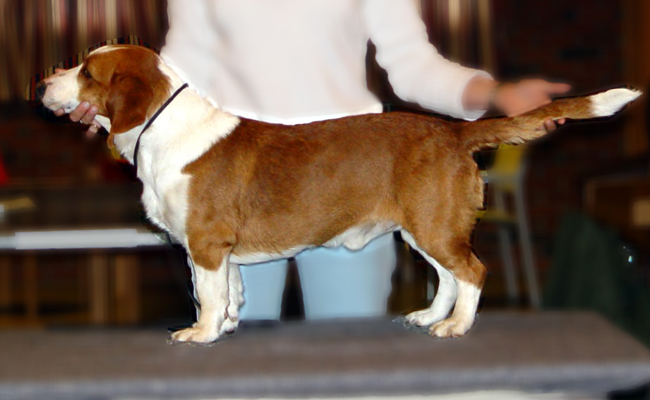 Characteristics of the Drever

Rather small, the Drever also called Swedish Basset measures between 30 and 36 cm in females and between 32 and 38 cm at the withers in males for an approximate weight of 15 kg which depends mainly on sex and age. The Drever is recognizable by its long, low-legged body. It reveals an agile and solid look. The animal wears an elongated head, large in comparison to the body, and which tapers off when it reaches the nose. The skull is a little convex and the stop is not accentuated. The dog also has a developed muzzle ending in a black nose with open nostrils. He has strong jaws and tight lips. He is recognized among other things expressive and shining eyes that sport dark colors and the ears are wide, long, and set low. The dog wears a long coat on the thighs, back, and neck and a short coat on the other parts of the limbs, ears, and head. The dress for its part can be two-tone or three-tone. The standard only prohibits plain white or liver color.

History of the Drever breed

Originally from Sweden, the Drever is a relatively new breed. He would have as ancestor the Westphalian basset who would have landed in the country around 1910 and which would be a short version of the Brachet of Westphalia. Bassets have undergone numerous crosses with local dogs to be able to acclimatize to the climatic conditions and the harsh environment of Sweden. The Drever has mainly earned its notoriety thanks to its talents in deer hunting. As a hound, it can also chase and catch hares, foxes, and other games.

Necessary living conditions and behavior of the Drever

First thing to know: the Drever is above all a working dog rather than a pet. He will always need physical, olfactory, and mental stimulation, which is why it is necessary for him to have available and athletic masters. Those who are sedentary in nature will have to go their way. The Drever is known for his endurance, his recklessness, and his highly developed flair. He is relatively sociable, but can be stubborn. He needs a solid education to prevent him from becoming a little thug. In terms of his lifestyle, like all hunting dogs, he prefers to live in the great outdoors rather than in a city apartment.

The Drever is a hardy dog ​​free from inherited diseases. In order for him to be spared from any health problem, he needs a quality diet with rations studied according to his physical activities in particular.

Price of a Drever Dog or Puppy