Elephant seals, mastodons among marine mammals, are very interesting animals. They have a way of life and a way of functioning that is very far from what one might imagine of a mammal and, surprisingly, they are found at both poles of the earth. Let’s take a look at the mysteries that this incredible marine animal has in store for us.

What is an elephant seal?

The elephant seal is a marine mammal, of the family Phocidae (the seal family), and of the genus Mirounga. There are two species: the southern elephant seals, and the northern ones, we will come back to this later. These large mammals live between 30 and 50 years (females generally live older than males).

Physiognomy of the elephant seal

The elephant seal is covered with a coat ranging from gray to brown, depending on age. These animals can weigh up to 2 tonnes for a male, and 800kg for a female, and measure 4 to 6 meters in males and 2.70 to 3 meters in females.

As you have seen, sexual dimorphism (physical difference between males and females) is very present in these species, since the male can be up to 4 times the weight of a female, and double its size. .

In the dominant male, his nostrils develop, to form a proboscis-shaped protuberance, which will serve as a sounding board for his roars and grunts during the breeding season, to scare away his rivals who would be tempted to impregnate the same females as him.

The head, which appears very small compared to the body, has small black eyes, and is adorned with many vibrissae (or mustaches).

Its legs, both front and rear, are atrophied. However, they can deploy in the shape of a palm, to serve as propulsion, both in water and on dry land.

The elephant seal can seem quite clumsy, especially on land, but it can surprisingly move up to 8km / h.

The two species of elephant seals

Contrary to what one might think, elephant seals do not spend their lives on the beach, diving from time to time for food. On the contrary, these large mammals spend the vast majority of their existence underwater looking for prey for food, and even if they do not have gills, and therefore require surface air to breathe, they have an incredible ability to freedive. Thanks to this, an elephant seal can dive to a depth of 1000 meters, and remain in apnea underwater for 20 minutes. The recorded world record even speaks of a dive of 1998 meters and an immersion period of two hours!

Elephant seals locate their prey thanks to their vibrissae, which manage to perceive the vibrations caused by the movement of said prey. These preys which are also various fish, but especially squid, their favorite food. Sometimes they even feed on small species of sharks.

Despite its size and weight, the elephant seal also has many predators, such as killer whales, sea leopards, and great white sharks, which tend to hunt the little ones that are born in the year. and which are easier prey. 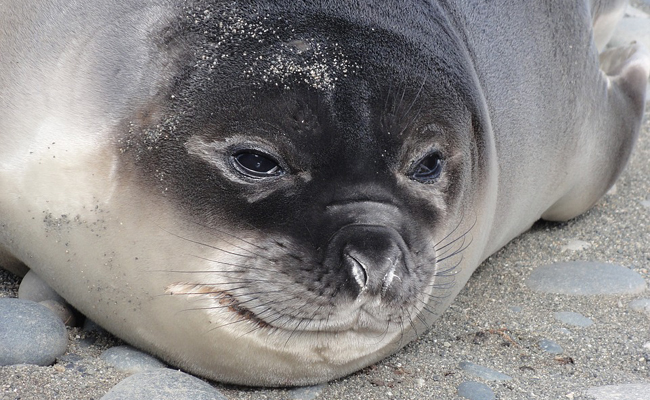 Elephant seals are found every 11 to 12 months (gestation period of a female) on the beaches that were mentioned above. On these beaches, females will give birth to their only young, which will measure about one meter and weigh between 30 and 35kg. He will be suckled by his mother for about three weeks, during which he will triple in size, and she will have to protect him from the male who could kill him by crushing him, while he defends his territory and his harem in the face of d ‘other pretending males. During this time the mother will not eat, and will lose weight considerably. Fortunately, its thick layer of fat will be enough to fill this period of fasting.

Females will be able to reproduce when they are around three years old, whereas a male will not reproduce for another nine or ten years, even if he is sexually mature at four.

The little ones, once weaned, gather in a nursery, the time to moult and lose their black lanugo (their baby’s black skin for which they have long been hunted), and to begin learning to swim.

The time has come for the males to impregnate their harem. A male can impregnate up to 300 females in one breeding season.

As you will have noticed, elephant seals are fascinating animals. Although very different in their way of life than a land mammal, there are however many similarities, such as the maternal and protective instinct of a mother, breastfeeding or just being viviparous. Even though we don’t live the same way, we still look alike in many ways.