Playful, agile and loyal, the ferret is a fascinating animal. However, it is rarely found in French households. Indeed, despite its undeniable qualities which could make it a perfect pet, the ferret is complex and should not be put in everyone’s hands. In this article, let’s discover this funny animal that is the ferret.

What is a ferret?

Ferrets (Mustela putorius furio) is a mammal of the genus Mustelidae, a genus that also includes weasel, mink, and ermine, among others. This mammal is a strict carnivore, so it needs food exclusively of animal origin to survive. Females measure an average of 40cm (including tail) and weigh 500 grams to 1kg, while males measure more than 60cm and weigh between 1.5kg and 2kg. These animals have a fairly variable life expectancy, it depends a lot on their quality of life. A ferret can therefore live from 5 to 14 years depending on the case.

There are two varieties, the polecat ferret, which has roughly the same color as a polecat, and the albino ferret which, due to lack of pigmentation, has white hair and red eyes. roses.

Ferrets are not found in the wild. However, it is not an endangered species. It is indeed paradoxical, we are going to look at this strange phenomenon.

The origins of the ferret

20 million years ago, evolution revealed the first mustelids, such as mink, ermine and polecat. However, no trace at this time of our ferret. The domestication of mustelids begins with a species of polecat in North Africa, to hunt mice and rats from the granaries where the grain was stored. This practice will also be used in Europe: in Greece, France or Rome, where ermine will be domesticated mainly to hunt rabbits, which it can go directly to look for in its burrow.

Over the course of domestication, the ferret will eventually appear, like the dog with the wolf. We find the first traces of ferrets from the 4th century BC. Throughout the Middle Ages, the ferret will be used a lot, always for rabbit hunting, and will also begin to become a pet among the nobles. Some historical evidence of the domestication of mustelids is still readily visible, such as “The Lady with an Ermine”, a famous painting by Leonardo da Vinci, which depicts a woman holding an Ermine.

In the 20th century, the ferret was then used a lot as a laboratory animal, and sought after for its fur, before the return of the craze for this species from 1970, when the animal became mainly a pet.

Caring for your domestic ferret at home

Owning a ferret can make you dream, we see a lot of images or videos on the internet that make you want to live with this cute little animal. However, there is a lot to know about the ferret, and taking care of it is not always easy. 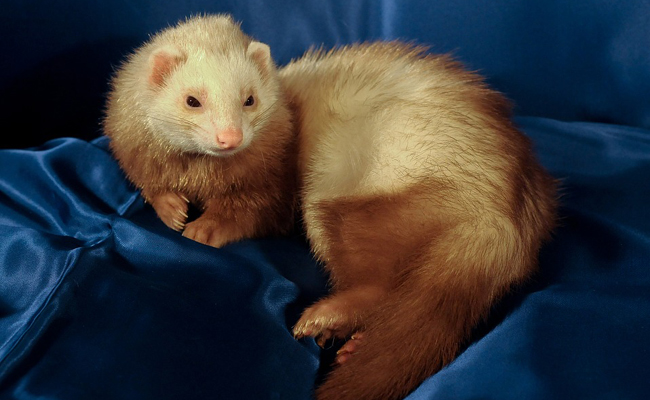 Ferrets are difficult animals to care for, and adopting one of these small mammals headlong can quickly lead to disillusionment. Here is a list of the often disturbing points to know when owning a ferret:

The ferret is weaned after two months. During this time, the mother breastfeeds the babies and teaches them the basics of life. However, where a mother of kittens will learn not to bite for no reason, this will not be the case with the ferret which, on the contrary, will often fight with its brothers and sisters, without hesitating to bite. It will therefore be necessary to teach him this by yourself, it is a long and tedious learning, sometimes painful, but it is essential to be able to handle a ferret in complete safety.

It involves learning through punishment, making the ferret understand that if he bites, something that he is not going to find pleasant is going to happen to him. For example, hold him by the skin of his neck and flick his nose (not too hard either, the goal is not to break his nose but to teach him), or for the bravest, him stick a finger at the back of the throat to disgust him. There are plenty of ways to do this, it’s up to you to educate yourself on the subject and find the method that suits you best.

As said above, if you have a room to dedicate to him, it will be all the better. Equip there as if this room were a giant cat tree, with tunnels, platforms, etc. Ferrets love hammocks to sleep on, rather than cushions. You can also sprinkle the room with soft toys, which he will love to play with. 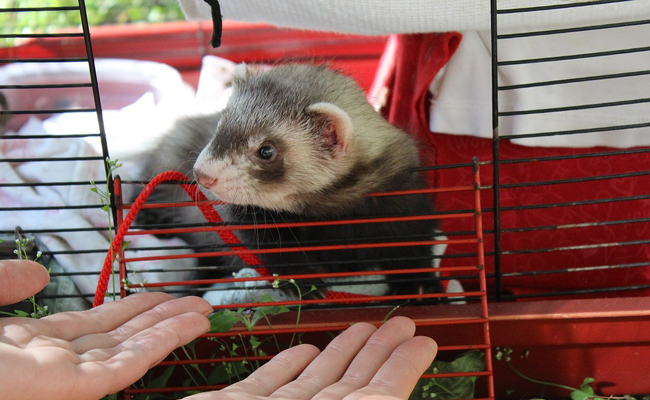 However, if you don’t have a room for it, a cage of at least 60cm deep, 1m wide and 1m high will do. For the bottom of the cage, old washable fabrics will be the most comfortable for him and the most economical for you, since he will have to be changed very regularly because of the smell.

Finally, the ferret is an animal that knows how to use a litter box. So put a litter box, cat litter will be perfect to fill it, and it will have to be emptied every day.

The ferret being a strict carnivore, as said above, there is no question of giving him anything plant, he will not want it. Ferret kibbles exist, and are available in pet stores, but you can also give them kibble for sterilized cats, less fatty than those for “whole” cats. The best remains the food for cats, less dehydrating than the croquettes, and providing more protein. In the event that the ferret needs a surplus of protein, such as after giving birth or for a convalescence, chicken breast will be ideal.

The health of the ferret

Ferrets have very strong antibodies, so it is very rare to see them get sick. There is, however, one important thing for females. If you do not wish to reproduce it, it is imperative to have it sterilized. If she is in heat and is not fertilized, she can develop hyperestrogenism, her hormones will attack the bone marrow, and will eventually paralyze and kill her.

The ferret is not an animal to be put in all hands, it requires patience and knowledge. However, he can also be a great companion with whom you can develop a great bond. Just be sure you can handle it 100% before you adopt it.