Despite their independent character and even if they are fairly easy-going, cats need a good foundation of education in order to establish respect and trust between the two of you from the start.

This is the first gesture that will have to be instilled in him if the kitten has not had the chance to grow up with his mother. After their birth, felines benefit from maternal education on the main cleaning habits to adopt. She is the one who tells them when to defecate by licking their anal region and their belly. Likewise, the cat gets used to the litter box when following its mother. For all these reasons, it is believed that the cat is naturally clean. Except that this reflex is not innate. If he couldn’t grow up with his mother, you will need to take matters into his own hands and get him used to the litter box. In addition, do not install it near its eating and sleeping area and clean it regularly, because cats are very demanding on this.

There is nothing worse than having a pet that refuses to listen to you. As the main source of motivation, choose treats. Animals love it. As an example, hold a treat in your hand and then call it out. Then step back, continuing to ask him to come towards you. When he does, give him the treat to congratulate him. In case of nonsense, you should not hesitate to punish him. Tap his cheek with your two fingers to scold him. If he continues to persist in doing a prohibited activity, spray him with a spray of water.

Handle it as soon as possible

It is strongly recommended to get the kitten used to being handled gently: gently stroke its stomach, take it in your arms, place it between your knees, check its gums and ears … However, do not overdo it. so as not to obtain the opposite effect, or even to disgust him. Choose the right times for cuddling sessions as well. Do not take it especially when eating or sleeping, at the risk of irritating it. He will also end up associating this act with harassment. Regarding the itchy on the stomach, there are two schools: cats who like them and those who like moderately. If your feline starts to get angry when you touch his belly, don’t insist and leave him alone. 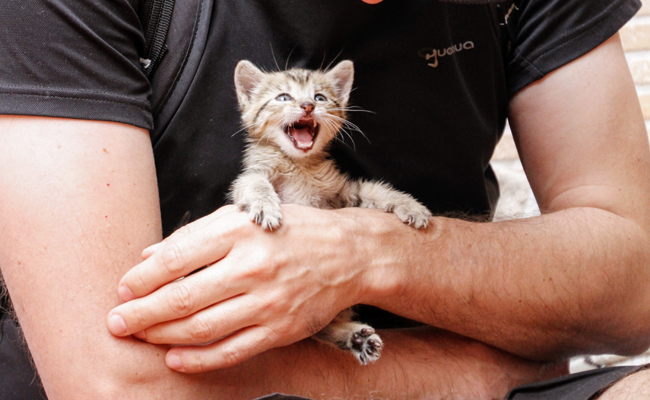 The question of socializing the kitten

Even if he gets used to you, your feline may have a hard time accepting the presence of other humans. Socialization is therefore an important stage in his education so that he is not suspicious or aggressive towards people. With children in particular, ask them never to rush the animal, so as not to scare it.

Scratching and damaging furniture is a problem that many cat owners are familiar with. To avoid damage, teach him to use a scratching post. Remember that this gesture is essential in felines, because it allows, among other things, to eliminate dead claws to promote the regrowth of news. Instead of berating him, it is better to encourage him to do it, but in the right place.