The giant panda, not to be confused with the red panda, is a mammal that can only be found in south-central China, and three quarters of these ursidae are concentrated in Sichuan province today, in the wild. In the rest of the world, it can be admired in many animal parks where it sometimes breeds. Let’s discover this great lover of plants, and in particular bamboo, even though he is a carnivore looking like a big black and white teddy bear.

The giant panda (Ailuropoda melanoleuca) belongs to the family of Ursidae (Ursidae). It’s a mammal of the order of carnivorous although its diet is mainly made up of plants, that is to say almost 99%, and more exclusively bamboo. This is the reason why the natives call him the bamboo bear. However, it can be susceptible to feeding on a few insects or bird eggs and even occasionally animal carcasses because its digestive system is quite adapted to this type of food that the giant panda digests very well.

For more than 14 hours each day, the giant panda chews the stems, leaves and young shoots of bamboo rich in cellulose. This long chewing is essential to be able to digest this carbohydrate particular because his colon is devoid of caecum, which does not promote digestion. This is also the case for all Ursidae. The caecum is a kind of small pocket inside which bacteria break down food. Thus, despite the time it spends chewing bamboo, the giant panda does not digest even 20%. It consumes between 20 and 35 kg of bamboo per day. 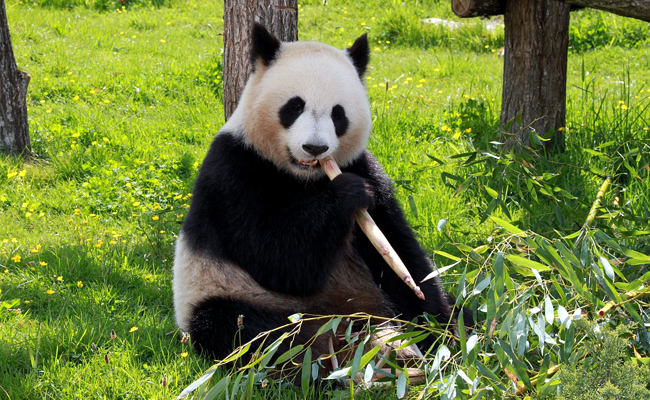 It is at the age of 5 ½ years and at the latest at 6 years that the giant panda reaches its sexual maturity. The breeding season is extremely short since it lasts only a few days, and only takes place once a year. More generally, the panda reproduction is difficult in the natural state, and when in zoos these animals manage to reproduce it is often thanks to artificial insemination.

After an average gestation period of 137 days – this being very variable from one mother to another – the female panda gives birth at most two young, or even three in the rarest cases, but only one of them does not survive because it is the only little one she takes care of. The father takes no part in the education of his offspring.

The birth weight of a baby panda is a minimum of 80 g and can reach a maximum of 140 g. Total weaning only takes place when the baby is around 11 months old. This ursid does not become fully autonomous until 18 months. In adulthood, it is a very stout animal that can measure over 1.70 m and weigh between 80 and 130 kg.

Thanks to its particular anatomy, the giant panda easily picks up plants. It has 6 fingers on each hand since the sesamoid bone (wrist bone) has over time transformed into a kind of thumb that opposes the other fingers. This sixth finger is called the false thumb.

In the wild, the giant panda hardly exceeds the age of 15 years while in captivity, its life expectancy can reach 25 years. 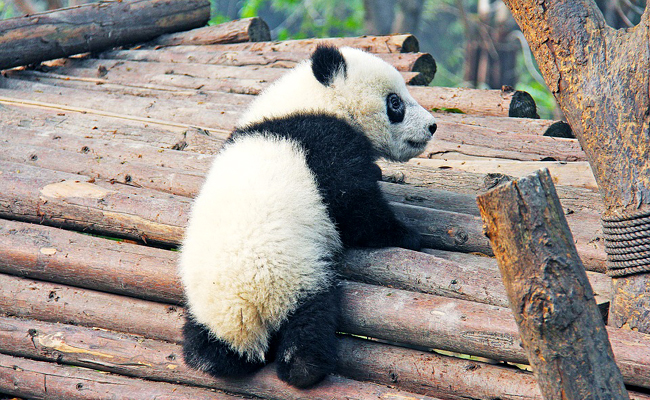 Is the giant panda threatened?

The giant panda has long been the subject of a protection campaign. It is no longer one of the threatened animals today, but remains however under high surveillance in China. The law in this country is largely in favor of the protection of this animal. If since 2010, killing a panda is an act punishable by imprisonment, it previously exposed to the death penalty.

The efforts made in China in favor of reforestation and the preservation of the habitat areas of the giant panda have made it possible to see the number of individuals increase significantly between 2003 and 2013. However, we must continue to be very vigilant, because nothing is happening. is definitely won in this area.

Indeed, his place of life is now reduced to a few islands planted with bamboo forests and which only represent around thirty thousand square kilometers. When a bamboo forest dies away, these animals no longer have the possibility of migrating to other islets since they are isolated from each other. Pandas are therefore easily exposed to famine. Given the current climate changes, winters are more and more severe, endangering the many bamboo groves of China. In less than a century, all bamboos risk dying, which is a terrible danger for the survival of the giant panda.