Splendid very colorful bird, the Gouldian Diamond is a sparrow native to Australia. Today is a pet that we can breed all over the world as long as we offer them the best living conditions in captivity. Let’s take a look at the peculiarities of the Gouldian Diamond, its way of life and what it needs to live happily in an aviary.

The Gouldian Diamond (Erythrura gouldiae) is a sparrow that belongs to the family of Estrildidae. This bird of the order Passeriformes lives in Australia, and more specifically in the Northern Territory, Queensland, the Kimberley and Cape York. It is mainly found in swampy areas and plains when planted with eucalyptus.

He lives in Group up to 2,000 individuals. It is only during the breeding season that the pairs move away from the group and then join it. They are not migratory birds. They move away at most forty kilometers from their living area during the dry season in order to find the water and food they need.

Males and females measure a maximum of 15 cm for a weight of 17 g. Thelife expectancy Gouldian Diamond is on average 6 years old, but under excellent living conditions it can live until the age of 8 years.

These sparrows are so colorful that they seem to have been born from the genius of a painter. Their plumage, with softer colors in females, is available in various color palettes depending on the variety. We can therefore observe Gouldian Diamonds: 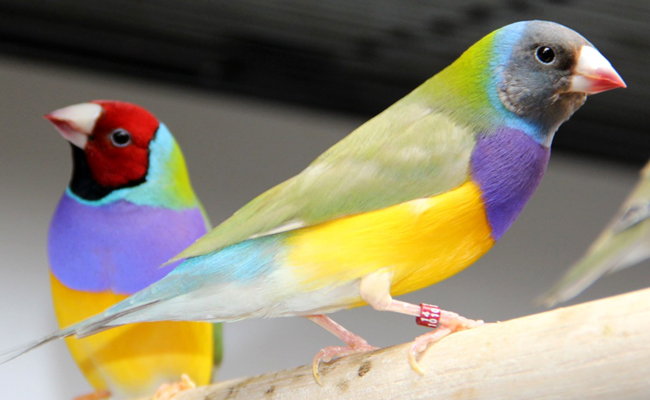 Reproduction of the Gouldian Diamond

These birds breed when food is most abundant. When bridal dance, the male tries to attract the female thanks to a song reserved only for his hound and swells to be more impressive. Seduced, the female accepts mating. It then lays its eggs in the carefully constructed nest in a bush or in the cavity of a trunk, always in the immediate vicinity of a water point. Sometimes the Gouldian Diamonds recover old nests that other birds have left for good.

Male and female take turns to brood eggs that hatch after 14 days, then feed their young by depositing small insects and seeds in their beaks. These are surrounded by taste buds reflective electric blue. Thanks to this peculiarity, the chicks can be fed even in total darkness.

After twenty days, the juvenile Gouldian Diamonds have changed a lot. While born blind and featherless, they now enjoy keen eyesight and possess all of their plumage. However, it does not take on its beautiful colors until after more than 5 or 6 weeks. It is then at this precise moment that these birds become totally independent.

Each Gouldian Diamond clutch has between 4 and 8 eggs, and a female can have up to 3 clutches per year. When these follow one another and the oldest chicks are still in the nest, they then lend a hand to their parents in the management of the most recent broods. 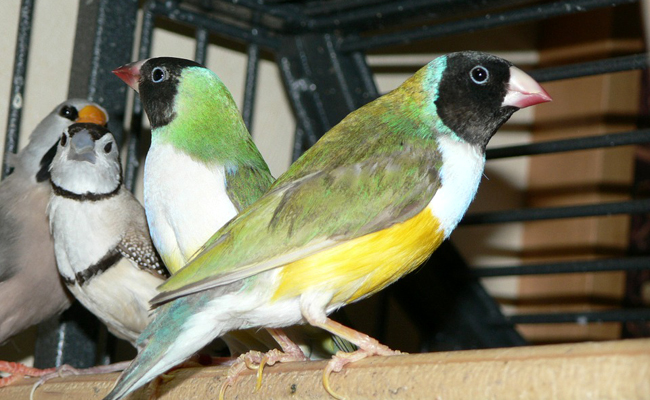 Is the Gouldian Diamond threatened?

Just before 1960, the Australian government took steps to ban the export of wild Gouldian diamonds. But before this decision was made, many specimens were exported to different countries around the world where they reproduced. They quickly spread to the United States and Europe where they were considered ornamental birds. But threats of all kinds ended up decimating many of these multicolored passerines.

The Gouldian Diamond is mainly threat by :

In Australia, artificial nests as well as palisades tending to protect these passerines have been set up and the reintroduction of the Gouldian Finch has been attempted on several occasions, but without much success.

In France, all Gouldian Diamond species are – in terms of law – classified aspets.

It is quite common toBreeding Gouldian Diamonds in our latitudes, which does not pose any particular difficulty. However, this bird must be allowed to benefit from all the optimal conditions so that it can live as long as possible, happy and in good health. Very sociable, he needs to be brought up with one or more of his congeners, and if possible in a couple.

Here is what must be observed for the Gouldian Diamond to enjoy in captivity.

He needs a aviary horizontal in shape generous dimensions equipped with:

The ideal living conditions are the following :

The aviary and all the accessories must be cleaned very frequently to limit the risk of infections. Finally, it is useful to seek advice from a veterinary to breed Gouldian Diamonds in the best conditions. Do not hesitate to have their health checked regularly so that they can be treated in the event of a problem.