The grizzly is among the three subspecies of brown bears, but each of these mammals has its own way of life and very specific characteristics. They should therefore not be confused. Contrary to popular belief, he is not the largest of the bears, but he nevertheless has an impressive massive build. Let’s go to the discovery of this animal nicknamed “Brother of men”, which spends almost half of its life sleeping and of which there are today 40,000 individuals in the wild.

The grizzly (Ursus arctos horribilis) is a omnivorous mammal which belongs to the family of Ursidae. Today it is found in Canada and the northern part of the United States, but a long time ago it was also found in Africa, Asia and even Europe.

It is an extremely powerful and impressive animal with its massive dimensions, head and musculature. It is, however, smaller than other brown bear subspecies. The female is smaller than the male. It measures in adulthood up to 3 m in length and more than 1.30 m at the withers for a weight of 350 kg. But he has the peculiarity of being able stand up on its hind limbs, which makes it appear extremely imposing. Being able to stand, he is sometimes nicknamed “Brother of men”.

Despite its mass, grizzly bears can reach a top speed of 66 km / h.

Her fur is dense with a thickness of 5-6 cm. It is brown to blonde and greyish at the tips of the hairs, hence the name grizzly (or grizzly). Its coat is renewed every year. In spring, grizzly bears can be seen rubbing against tree trunks or scratching their bodies with their long claws. This allows them to remove the fur from the past year.

It has a lifespan of 30 years in the wild, but in captivity, grizzly bears can live for up to 50 years. 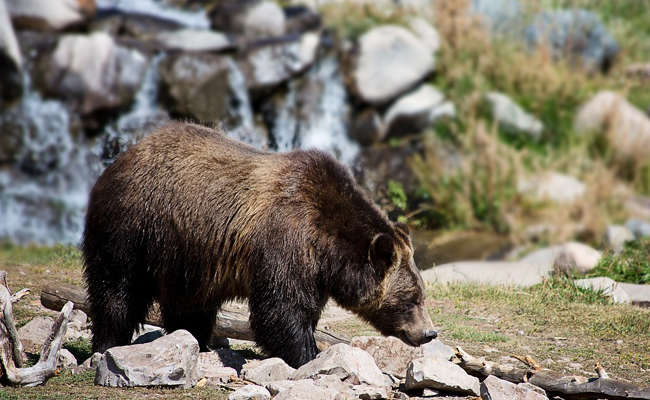 This omnivorous mammal feeds on foods of plant origin (leaves, roots, berries) and animal origin such as fish mainly but also molluscs (clams), small species of mammals and insects. Sometimes it can prey on large mammals such as black bear, bison, muskox. It has another characteristic (common in many insects), which consists in stealing, for food, the food reserves that other species have stored for their own consumption. This is called the kleptoparasitism.

We know some of his lifestyle today, but many of his customs are still ignored.

This animal lives on a territory which is not exclusive to a single bear. It can be satisfied with a relatively small space when food is abundant. In these sectors, especially in North America where it can find countless salmon, it willingly shares a territory with its congeners.

Although not a territorial animal, grizzly bears need a small space of their own, and are able to defend them, especially where bear numbers are relatively low. Faced with an intruder, he more frequently opts for escape. The grizzly only attacks another bear or a human with a sudden intrusion into his personal space. The cases of attacks on humans remain very exceptional. In any case, the behavior of this animal differs depending on whether it lives alone or in a large concentration of grizzly bears. In the second case, it is more pacifist according to specialists. 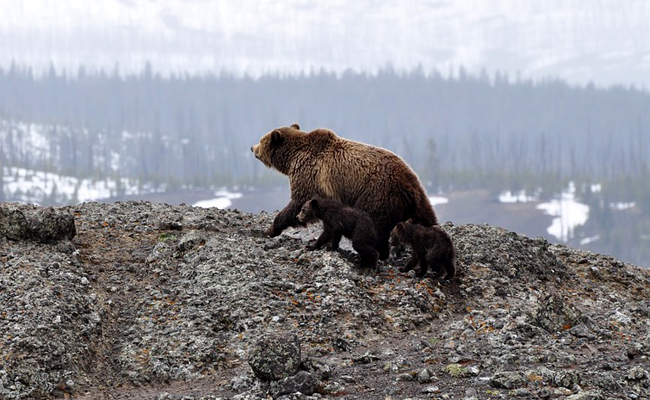 Before the cold season, the grizzly is preparing to enter lethargy. He therefore stores nearly 200 kg of fat so that his body can cope with it.

It hibernates a good part of the winter in the cavity of a large tree trunk or at the bottom of a cave. To protect himself during this long period, he takes care to look for a lair totally closed by heavy snow. In grizzly bears, unlike other bears, we talk about pseudo-hibernation because he does not go into a deep sleep for several months. He always stays alert which allows him to be able to defend himself if he is attacked.

Grizzly bears are able to reproduce from the age of 4 to 6. During the love period which takes place in late spring, a male can mate with several bears. This is the dominant male. The period of gestation lasts 7 months. Females can carry a single cub, but cases of twinning are very common in grizzly bears. The cub death rate is extremely important during the first year since it is in the order of 30 to 35%. Some of them are killed by males.

It is during their sleep – during the hibernation period, in January or February – that females give birth. A bear cub weighs at most 1 kg at birth. For 18 months, he is breastfed by his mother and then stays by her side until he is 3 or 4 years old and can live completely independently.

The cross between a grizzly and a polar bear is quite possible. Hybrid cubs are then called either pizzly or grolar.