Stop treating and fertilizing products which pollute the soil and decimate animal species! Welcome to our garden friends among whom the hedgehog occupies a special place. This auxiliary is of great preciousness and is a joy to the amateur or professional gardener. Who exactly is this little insectivorous mammal with spiky, prickly hairs? What roles does it play in the garden that make it so essential ? How to attract in your little corner of nature this protected animal by the law of 1976?

Hedgehog is the term used to designate different animal species, some with prickly hairs and others not (for example the case of gyms that can be found in Asia). Let’s take a closer look at Common hedgehog (Erinaceus europaeus) which belongs to the family of Erinaceidae. It is also called European hedgehog or just hedgehog. It can be seen in all European countries.

It has a rather dark mask around its round, piercing eyes and its pointed muzzle. Despite its short legs, it is a fast animal that can travel several kilometers in one night to find food.

At the age adult it can have up to 7,500 unbreakable quills which are none other than its hairs, brown at the base and gray-beige at the tip. They represent a weapon of defense. The animal can bend and deploy them as it wishes thanks to different muscles on its back. Each thorn has a lifespan of one and a half years, after which it falls off to make room for a new needle. On the rest of its body, the hedgehog has a low density of non-prickly, stiff and relatively soft hairs, the color of which is brown.

The same adult male weighs much heavier in winter (up to 2.5 kg) than in summer (between 600 and 700 g only). The hedgehog is lighter.

In the wild, thelife expectancy of the Common Hedgehog is about 3 years old. In captivity, it can live a good ten years. There is a high mortality rate in young hedgehogs since nearly 70% of them die before the age of 1, a large majority being victims of road traffic. The others are the prey of predators such as eagle owl, buzzard, stone marten, badger or are victims of infectious diseases caused by parasites. There are also some who drown in private swimming pools. 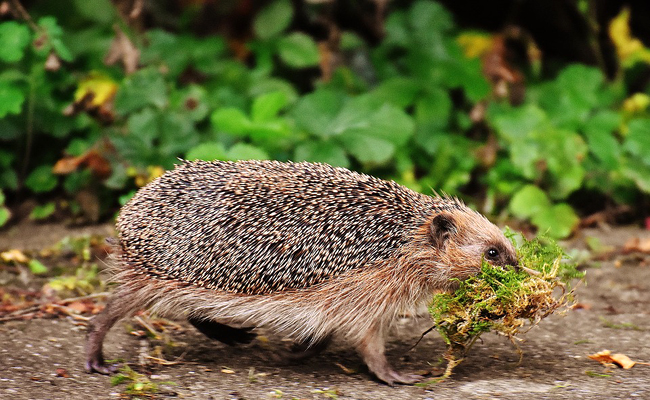 It’s a nocturnal mammal which feeds mainly on insects, gastropods, eggs, fruits and berries. As soon as its food becomes scarce (with the approach of winter), it hibernates. To be protected from the cold, it builds a nest at the foot of a tree, in a haystack or digs a burrow where it stores twigs and leaves that it packs by jumping or rolling over it. During thehibernation, it wakes up once every 6 or 7 days. It stops hibernating as soon as its fat reserves are depleted, regardless of weather conditions. This is when the rutting period begins, which ends in September.

When not hibernating, the hedgehog is very active from nightfall until dawn and sleeps during the day.

Gestation lasts between 35 and 49 days. A hedgehog can give birth to a maximum of 7 young in each litter, and can have two litters per year. The baby hedgehogs are born without thorns but they appear only a few hours after their birth. They are soft and therefore do not sting. They drop after 15 to 21 days and are replaced by stinging brown needles. The young then venture out of the nest and begin to to curl. The mother breastfeeds them again but not for a very long time because as soon as her offspring reach the age of 2 months, they leave her for good. In a few weeks, they have all forgotten each other to such an extent that mother and children can cross paths without recognizing each other. 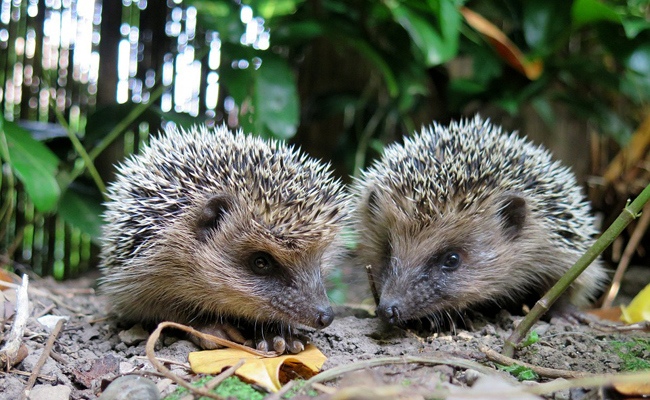 Hedgehog, an absolutely essential animal in the garden

The hedgehog is an animal totally harmless to humans and it is from a great utility in the vegetable garden, the pleasure garden and the orchard. Thanks to it, we can do without many chemical, toxic and polluting treatment products. Indeed, the Hedgehog is fond of:

It therefore greatly participates in the survival of plants of any type (flowers, vegetables, fruits, etc.). You just need to attract a few hedgehogs to your garden to get rid of all the unwanted bugs that destroy young plants as well as already well-developed plants as well as crops. We can quite attract hedgehogs by arranging a compost or by feeding it with ripe fruits and berries, mushrooms and even with pet food they adore (see this special feature on what the hedgehog eats)

Registered with the Berne Convention, the hedgehog is protected. It is forbidden to capture it, sell it, mutilate it, kill it. It is also forbidden to move it, even when it is dead, and to naturalize it. On the other hand, we are all encouraged to set up shelters or lodges for it with a few small piles of wood, to let bushes and hedges thrive so that it can live in peace, reproduce and continue to live for a long time. play its indisputable role in biodiversity.