Also known as the German Hunting Terrier, the Jagdterrier is an outstanding hunting dog used to indicate the location of the game or to dislodge it from its den. It can also be adopted at home as a protective guardian or simply as a companion. 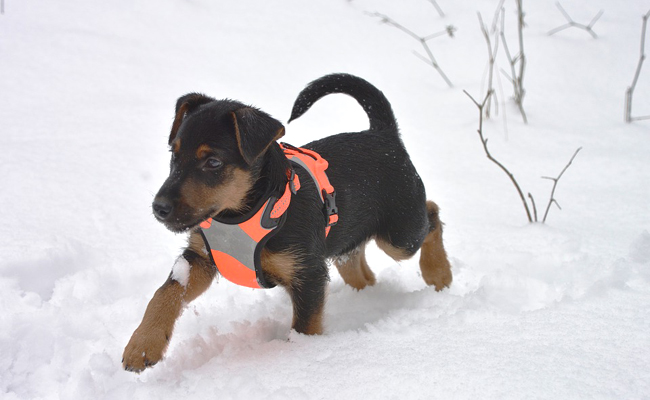 Features of the Jagdterrier

Being a terrier, the Jagdterrier needs to be small in size to be able to squeeze into dens and capture prey. This hunting dog thus measures between 33 and 40 cm on average and weighs between 7.5 and 8.5 kg if it is a female and between 9 and 10 kg if it is a male. He is recognized by his well-proportioned and compact body with a straight back, strong, without being excessively short. He also has a well-marked withers, a deep chest, and a horizontal, muscular croup. When it is moving, the dog reveals a clear gait. The animal wears a wedge-shaped, elongated head with a broad, flat skull and a slightly accentuated stop. The muzzle is powerful and ends with a black nose. The dog has oval, small, dark eyes that express determination. V-shaped, the ears are of intermediate and semi-drooping dimensions. The coat is straight, short, and tight. The dress is black with tan spots. The presence of white on the chest and fingers is tolerated.

History of the Jagdterrier breed

The Jagdterrier made its first appearance in the 20th century. He was born under the impulse of German foresters who needed a native terrier from the country able to compete with those coming from Great Britain. For this, crosses with the Welsh-terrier, the Fox-terrier, as well as the Old England terrier, were made. Links to the Pinscher and the Dachshund are also believed to exist. In 1926, the breed club was launched. It was not until the 1960s for an introduction in France and 1968 for recognition by the FCI (Fédération Cynologique Internationale). The dog is especially appreciated in Rhône-Alpes and in the east.

Necessary living conditions and behavior of the Jagdterrier

Nicknamed the Little Black Devil, the Jagdterrier is a real ball of energy who never misses an opportunity to show his liveliness, courage, and sportiness. He is so reckless that he is not afraid to face enemies bigger than himself. Retraining as a pet is possible for this breed, but since this dog is a hard worker, he needs a lot of other activities. Very versatile, he can for example take on the role of guardian, because he is suspicious of strangers. It is also an independent breed which is not easy to educate because of its strong character and its nasty side.

Diet and main health problems of the Jagdterrier

The Jagdterrier has an iron health. However, it is advisable to have the primary dislocation of the lens that affects the eye regularly checked. During the hunting season, it is important to watch for injuries, bites, fractures, or possible sprains after each outing. In terms of food, it must be as varied and as healthy as possible.

Price of a Jagdterrier dog or puppy