With its immaculate white dress, its robust constitution, and its good humor, it is sure, the Kuvasz does not go unnoticed. The dog, originally from Hungary, first practiced as a sheepdog before becoming a pet appreciated for its absolute loyalty to its own people. 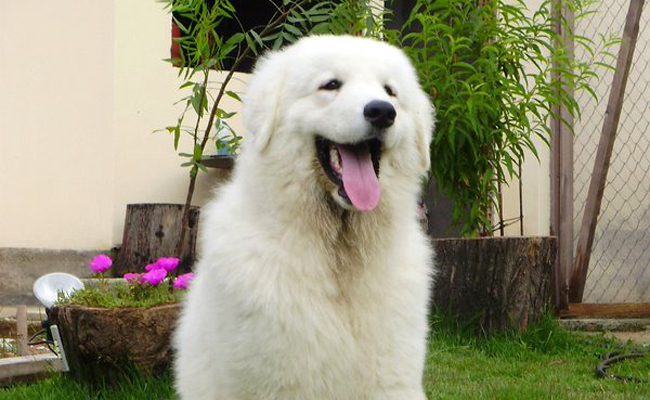 The Kuvasz has a comforting and pleasant appearance. With a size of 66 to 70 cm if it is a female and between 71 and 76 cm if it is a male, it weighs between 37 and 62 kg depending on its sex and age. In addition to its large size, the dog has developed musculature, strong bones, and a body that can be inscribed in a rectangle. The withers are long, the kidney short, the back broad, straight and medium, and the chest long and well let down. The Kuvasz is remarkable for its wedge-shaped head and proportional to the body, it sports a large skull and a slightly accentuated stop. The muzzle tapers off while the nose is black. The jaws are powerful and the lips are black. The animal has angled almond-shaped eyes that are dark brown in color. The ears on their side have a round tip, a V-shape, and are attached at mid-height. The Kuvasz has a long, fluffy, soft, and wavy coat. He has immaculate ivory or white robe.

History of the Kuvasz breed

It is difficult to trace the origins of Kuvasz. We know that he is descended from Asian races, but it is relatively complicated to know which exactly. What we are sure, however, is that the dog has existed for a long time in Central Europe. He is said to be from Hungary and would have links with the Tatra Shepherd, the Abruzzo Shepherd, the Polish Shepherd of Podhale, or the Mountain Shepherd of the Pyrenees. The animal was reportedly introduced by the Mongols into the country during their invasions while other versions say it was imported by the Magyars. This dog is found in many illustrations and various works of literature from the 15th century. He was especially appreciated for his natural qualities as a sheepdog and in hunting activities.

Necessary living conditions and behavior of the Kuvasz

The Kuvasz is a very reckless animal. He is not afraid to face the most formidable enemies including coyotes, wolves, or bears. Beyond his abilities as a guard dog, he can also integrate families very well. This dog is valued for its protective instinct, intelligence, and devotion to its owners. On the other hand, he has a strong character which must be managed by an adequate education. In addition, the Kuvasz needs space to live. The apartments are unsuitable as an environment.

Like many large dogs, the Kuvasz is not spared from hip dysplasia. He can also suffer from osteoarthritis with age, hence the importance of controlling his weight and therefore, offering him a healthy and balanced diet.

Price of a Kuvasz dog or puppy