We denote by the term mink some species of carnivorous mammals belonging to two distinct genera but to the same family. Not to be confused with the weasel or the polecat, which sometimes happens, the mink is a small endangered animal, especially with regard to the European mink. Let’s meet the three species of mink still present in the world.

Mink is the vernacular name for mammals of the family of Mustelids. Some belong to the genre Mustela as the siberian mink and the European mink, and others like Neovison such as American mink which is today the only representative of the genre still alive. The other was the sea mink, but it has totally disappeared from the face of the earth for almost a century and a half.

Mustelids have a muscular and elongated body and perfectly balanced proportions. They are recognizable by the curvature of their backs. Their tail is long. Their semi-webbed legs allow them to move easily in aquatic environments such as rus, rivers, torrents. Their fingers are extended by non-retractable claws. They have 34 teeth including 4 extremely sharp canines. 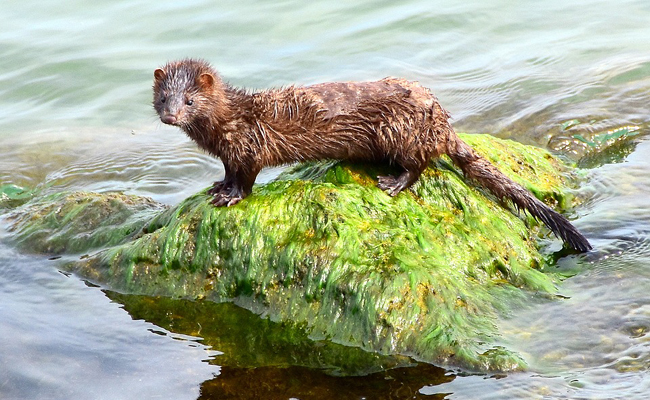 This small mink lives in the wild in the following geographic areas:

It is however in the Boreal forest or taiga that Siberian minks are the most numerous, especially not far from waterways. It can even be seen sometimes in the immediate vicinity of homes. In Japan and on Sakhalin Island, the Siberian mink has been introduced by humans.

It reaches a maximum length of 39 cm for a weight of 800 g at most. Its silky coat is particularly long and thick during the winter when it takes on a fiery yellow color. In summer, its shorter and less dense coat is dark brown. The hairs of its long tail are used for making Kolinski sable hair brushes (name sometimes spelled Kolinsky) and used in the artistic field also marketed under the name Kolinski extra fine red sable brushes. They are mainly used by painters for the representation of details because these hairs are of an incomparable flexibility and a great finesse. They are therefore perfect for a precision work.

Depending on its geographic area of ​​residence, the Siberian mink reproduces between February and the end of April. After a gestation period of between 38 and 41 days, the female gives birth to a litter of at least 4 young and at most 10. She breastfeeds them for 2 months, and when they are born, their fur is still very fine. white and they are totally blind. They keep their eyes closed until they reach the age of 1 month. As for their coat, it only takes a few days to become more or less brownish yellow. From their 5th or 6th months, the young mink have reached their final size and are completely independent.

The number of Siberian mink is relatively stable. He is therefore not threatened.

It is very frequently confused with the polecat (Mustela putorius putorius) also belonging to the Mustelidae family, especially when it wears a discreet face mask. However, these are two very different mammals.

The European mink has a thick and short coat whatever the season, with a very dense undercoat. It is a fairly dark brown and this color is evenly distributed over the body and tail. The legs are sometimes blackish and in some individuals we can see red reflections on the back. Only two small white spots are visible on the muzzle black, and in some individuals one may notice only one spot. No European mink escapes this physical distinction.

This carnivorous mammal has a slender, slender body with an inconspicuous neck and relatively short legs whose hind feet only are semi-webbed. They allow it to live partially in aquatic environment, especially since his undercoat is water repellent. This mink is also an excellent swimmer.

We know of 22 distinct preys. It feeds on fish and fish eggs, also eats birds, large voles, rats, field mice, amphibians and insects. He does not disdain farm animals, especially barnyard animals that he is able to hunt without any fear.

Male and female mate during the first semester. After a gestation period of 43 days on average, the female gives birth to at least two young and seven at most.

It’s a critically endangered species since it has lost nearly 90% of its representatives in less than a century. The European mink was victim:

It also gave way to the American mink which, after being introduced into Europe, became very invasive to the point of hunting European mink from its territory, the two species living in the same environments (called the ecological niches).

Formerly called Mustela vison, it is native to North America. Its fur is variable in color from reddish brown, light or dark, sometimes even bordering on blackish brown. A few white spots on the belly are possible, but what is found in most American mink is a white spot on the chin. Those born in farms have been the subject of crosses so that today there are white specimens whose coat is simply punctuated by a few more or less dark spots. Some individuals are even sometimes completely free of spots.

In the wild, the male can measure between 58 and 70 cm between his muzzle and the end of his tail and weigh between 1 and 2 kg. Much smaller, the female does not exceed 65 cm for a weight ranging between 0.6 and 1.2 kg. On the other hand, when they live in captivity as with farmed American minks, they are usually very bigger and heavier, as regards both males and females. The maximum weight being in these precise cases of captivity of 4 kg for the first and 2 kg for the second, with a respective maximum length of 90 and 75 cm.

The American mink is now very present in Europe and therefore in France. These are geographic areas that he widely colonized and where he is considered today as a New Pet (NAC).

Unlike the American mink and the Siberian mink, the European mink is highly threatened with extinction. He climbs up on your mind of the animals most affected by this threat in France. It is included on the red list regularly updated by the International Union for the Conservation of Nature.