A Canadian breed, the Nova Scotia Retriever, also known as the Nova Scotia, is a hunting dog that mostly appreciates small prey and is renowned for its excellent swimming abilities. Although full of love and kindness, this breed remains little known in Europe. 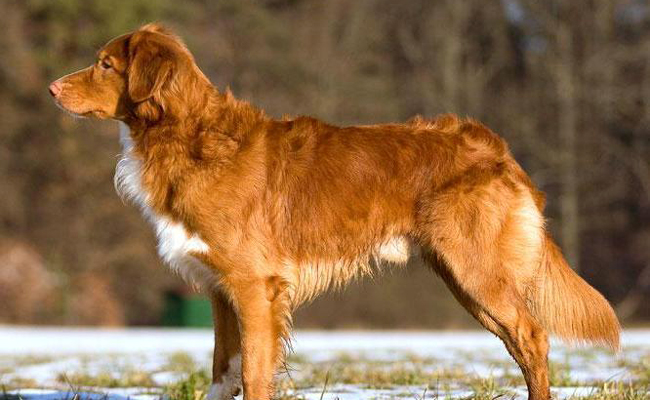 Characteristics of the Nova Scotia Retriever

The Nova Scotia is a rather medium-sized dog that measures between 45 and 48 cm for a female and between 48 and 51 cm for a male, with a weight ranging from 19 to 25 kg depending on age and sex. This animal is recognizable by its compact and powerful physique as well as its average bone structure, developed musculature and harmonious proportions. He sports a straight and short back, a muscular and strong kidney, a raised belly and a well let down chest. The Nova Scotia Retriever exhibits an elastic and powerful gait and walks in an unobstructed manner. It is distinguished by its head proportional to the rest of the body which draws a broad and slightly convex skull, a marked stop, a black nose with well open nostrils and a clearly defined muzzle. The almond shaped eyes are set wide apart, display an amber to brown color, and are of medium size. The ears are also of intermediate size, triangular in shape with a high attachment. The Nova Scotia Retriever wears a long, soft coat with a coat ranging in color from red to orange.

The Nova Scotia Retriever is a Toller. This type of dog finds its origins in the Gulf of St. Lawrence located in eastern Canada from the 19th century. There are many versions relating the history of tolling dogs. Some say they were born from a cross between the Labrador Retriever, the Flat Coated Retriever, the Irish Red Setter or even the Cocker Spaniel. Others speak of a cross between the Golden Retriever and the Chesapeake Bay Retriever. The breed could also carry Collie blood. The Nova Scotia Retriever was bred to act as a waterfowl reporter, an activity in which it particularly excels. Very rare in Europe, this breed is found more in North America.

Life Requirements and Behavior of the Nova Scotia Retriever

Nova Scotia stands out for its intelligence. It is an animal that is both receptive and also enduring. In addition to his qualities as a hunter specializing in waterfowl, he can also take on the role of family dog. We recognize him in a good mood and he feels a lot of love towards his masters. He is a dog who loves to have fun and who likes to evolve with children. He doesn’t bark much, but when he does, his barking makes loud, high-pitched sounds. An element to take into account before welcoming it in co-ownership, because its vocalizations may annoy the neighborhood.

Diet and main health problems of the Nova Scotia Retriever

The Nova Scotia Retriever is a hardy animal. As long as the breeding is done within the standards, it should not bear any eye damage, hip dysplasia or other pathologies. His diet must be healthy, balanced and adapt to his activity and age.