The octodon is certainly the least known rodent in France. However, this small mammal having the appearance of a squirrel that we would have crossed with a gerbil is absolutely not without interest, since it can be both very intelligent and very curious to observe. How to take care of a degus at home, who is this little animal, and how does it live? All the answers to these questions can be found in this article.

What is a degus?

What is commonly called the octodon is a fact different species that are part of the Octodontidae family, a family of rodents. There are actually four species of the genus Octodon:
Octodon bridgesi,
Degus octodon, Octodon lunatus and Octodon pacificus.

Among all these species, only Octodon degus, more commonly called “Chilean degus” is authorized as a pet because it is considered a NAC (New Pets).

This small herbivorous mammal has not always been described as a rodent, since it was not until the 19th century that naturalists have classified it in this order, noting a very particular physical characteristic: molars and premolars in the shape of 8, hence its name (
octo meaning 8 in Latin).

Physically, the octodon wears a tricolor coat: coffee color on the back, a yellow belly tending to beige, and gray legs. He has large ears, small black eyes like most rodents, and vibrissae on his muzzle (whiskers used to detect vibrations in the air, helping him to perceive his surroundings).

These small rodents are not very big, since they measure only between 12 and 20cm long for a weight ranging from 250 to 350g (the females being larger and fat than the males).

Finally, the life span of the octodon varies between 6 and 8 years in captivity, and between 2 and 4 years in the wild.

The octodon in its natural habitat

The octodon is only present on a whole part of the globe, since its natural habitat is concentrated in South America, and more precisely in central Chile, on the western flank of the Andes. It lives at altitude, up to 1200m, in the steppes or plateaus, in which it will dig galleries up to 2m deep, creating a network of tunnels connecting various chambers. It will take shelter in its den at night in case of extreme cold, or even during the day when it is too hot, the octodon being an animal that cannot withstand large thermal amplitudes. However, he will go to look for food during the day, taking advantage of times when the temperatures are mildest (most often at the start and end of the day). The octodon is therefore an animal that can be considered diurnal.

Our little rodent is however not immune when it comes out of its burrow, since it has many predators, in particular the birds of prey that inhabit these areas at high altitude, but also men who classify it among the pests, since it happens to obtain food in the agricultural crops of humans living near its natural habitat, even if it will mainly go to collect seeds, roots and other plants in the nature which surrounds it, in particular in the trees, since the octodon is indeed a very good climber.

Socially, the octodon lives in small clans, most often made up of one male for two or three females, each of them having on average one to two litters per year.

How to take care of your degus in captivity?

The character of the octodon

The octodon is not the easiest rodent to own at home, since its rather particular character brings its share of constraints. First of all, as we saw above, the octodon is a gregarious animal, which means that it will not be able to live alone in its cage. He would risk being depressed, or even letting himself die.

However, having several males live together is not a good idea either, since their territorial nature often causes them to become violent and fight with each other, sometimes to the death.

It will therefore be best to have either a group of at least two females cohabit, or one male for two females (in this case taking into account the very high probability of reproduction), knowing that a male, alone with a female, would risk kill her from exhaustion by trying to mate with her.

The curious nature of the octodon could also be a problem, since to satisfy it, it will have to be left wandering regularly outside its cage (under surveillance of course). The concern being that if you have animals capable of scaring it (dog or cat for example), the octodon could become aggressive in wanting to defend itself. 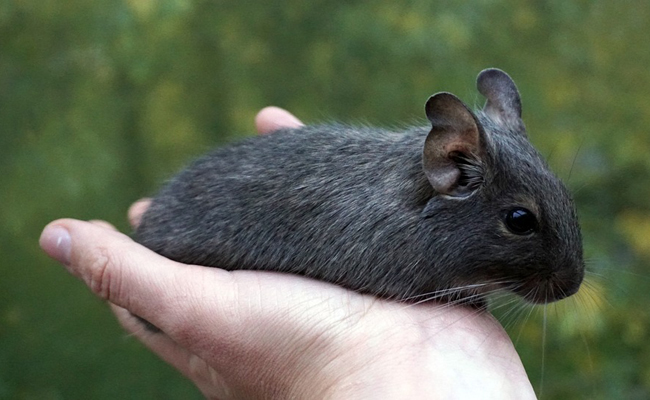 Adopting a degus when you have potential predators for it is not always a good idea, unless you make some adjustments.

The habitat of the octodon

The habitat of the octodon is quite similar to the habitat of a chinchilla. They will therefore need (let’s not forget that they will be at least two) a large high cage (a large furnished aviary could do the trick), consisting of a bottle for water, a hammock for ” they can rest (one will be needed per degus if you observe regular conflicts), a bowl for food, and a substrate (a litter) of hemp or wood chips, on a good thickness (degus are burrowing animals, they must therefore be allowed to dig), which will be changed once a week, every two weeks at most.

Finally, degus have a common characteristic with chinchillas: their hairs produce excess sebum. They will therefore need a tub of soil so that they can roll in and clean their coat.

The cage must be installed in a calm environment, sheltered from any drafts, and avoid placing it in direct sunlight.

The octodon is an animal that can feed itself without too much difficulty. It will suffice to give him mixtures of seeds “special degus”, available in the great majority of pet stores, as well as hay at will.

You can also give it fresh fruits and vegetables but in small quantities, and above all, low in sugar, the octodon being a naturally diabetic animal. Thus, foods such as broccoli, carrot, celery, zucchini, endive, spinach, strawberry, raspberry, green beans, lettuce, melon, peas, leek, peppers , apple, salad and tomato, can be given without worry, but again, in small quantities.

In addition, you can provide your degus with mineral stones which, in addition to providing minerals, will allow him to cut his teeth.

As you can see, adopting a degus should be a thoughtful choice. It creates some constraints, in addition to having a certain cost and having to make some adjustments if you already have animals. On the other hand, if you feel ready to welcome these little animals into your home and make the necessary efforts, they can be great little companions full of life.