TheWhite Bear also called polar bear has a constitution and a metabolism that allow it to live on ice floes. However, global warming is at the origin of the melting of the drifting ice sheets essential to the bear. Let’s discover this powerful mammal with thick white fur if seriously threatened, and which could disappear completely within a hundred years.

The polar bear, Ursus maritimus, belongs to the family of Ursidae. It’s a omnivorous mammal, but its diet is mainly of animal origin. The polar bear is also one of the largest carnivorous mammals of the planet. It feeds on seals, walruses, fish. To hunt, the polar bear settles on the drifting ice sheets allowing it to move.

His place of life is limited to arctic zone, and more particularly to the pack ice that surrounds the North Pole. Its constitution allows it to survive in this icy environment. It is perfectly insulated by its dense fur and a thick layer of body fat. Under normal living conditions, the polar bear can live between 16 and 30 years.

It is an extremely powerful animal to massive build, well camped on big legs. Its claws allow it to grab its prey. It has a short tail, small ears, and a head that fits into a rectangle. Its immaculate white fur in summer and winter allows it to go unnoticed on the ice. Only its pads and eyes are black, just like its skin elsewhere and its prominent muzzle that it masks with its paws during hunting periods so as not to be spotted by its prey. 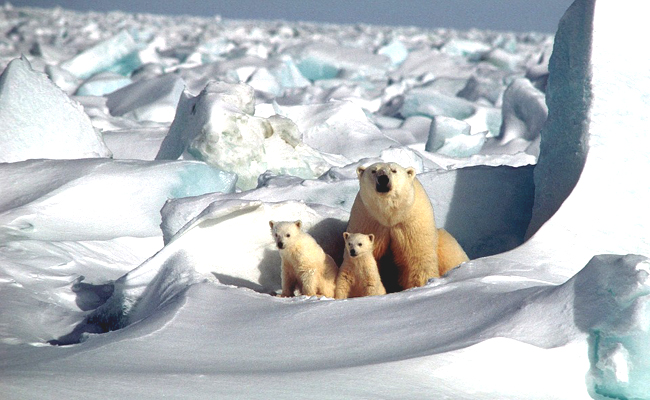 It is only from the age of 4 that the male polar bear reaches sexual maturity, while the female can have cubs from 3 years old. Mating takes place in June. The gestation period is only 55 days. However, thanks to delayed implantation phenomenon, the embryo is carried for 5 months so that the bear gives birth during the month of December. She only carries two cubs at a time, and can start a new family only once every three years.

From birth to 4 months of age, cubs breastfed by their mothers are confined in a lair, then at the end of this period they discover the outside still in the company of the bear. She teaches them to dig a den, to use the drift plates to hunt and to eat. This education lasts about 3 years, after which the young, now independent, leave their mother. Thanks to the high fat content of breast milk, bears gain considerable weight during their first years of life.

The polar bear is a victim of the melting ice in the Arctic Ocean to such an extent that it is now on the red list of threatened species. This animal has a metabolism perfectly adapted to life on ice, but the polar bear could not survive for long without ice.

According to the studies carried out, there is much to fear that this vulnerable species disappears completely in less than 100 years. The estimates are alarming : out of 22,000 polar bears currently identified, 14,000 of them could even have disappeared in about thirty years.

The increase in temperatures has a negative impact on the seals, which are part of the diet of polar bears whose fasting periods are lengthened. In addition, the melting sea ice due to global warming causes the permanent disappearance of many sections of ice. All the refuges of these bears are in danger and there are fewer and fewer of them. There is therefore a change in his lifestyle. Thus, some polar bears get closer to indigenous and local communities, others devour their congeners, and finally others die of exhaustion while swimming in search of patches of ice.