Also known as Portuguese Braque, this hunting dog of the Iberian high nobility has gained notoriety as a pet thanks to its playful and affectionate character. Moreover, given his sociability, he is a poor guard. 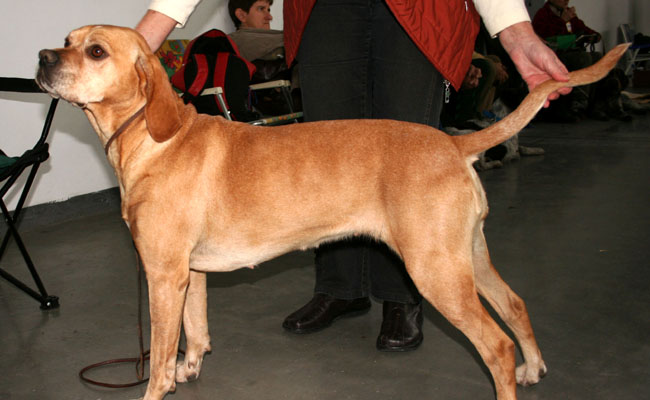 Characteristics of the Portuguese Pointing Dog

Physically, the Portuguese Pointing Dog has many peculiarities that allow it to be recognized at first glance. His body of harmonious proportions is said to be “medioligne” in other words, it does not express massiveness, but displays a rather significant length. In addition to having a beautiful musculature, showing power and unveiling an elegant appearance, the Portuguese Pointing Dog is also “braccoid” with its broad muzzle. We recognize a convex profile and a square skull with a well accentuated stop. The oval shaped eyes flaunt a dark brown color for a lively look. The Portuguese Pointer wears floppy ears, carried backwards, thin and triangular in shape. Free from undercoat, he wears a tight coat, coarse to the touch, short and well supplied. This one does not need any grooming except for a few brushing sessions every now and then. The dress must be unicoloured brown or yellow with the presence of touches of white.

Descendant of an indigenous dog, the Portuguese Pointing Dog became known from the 10th century in Portugal. For many centuries, it has hardly changed: same size, head, body, ears and functions. Whether on glazed tiles, Portuguese Bibles or even stone plaques, all the representations bearing his effigy show a stationary animal in full hunting activity. Specializing in feather hunting, this breed was first the prerogative of the nobility. Gradually, it becomes very popular with the working class thanks to its innumerable qualities. From the 19th century, the introduction of new breeds to the country lowered the popularity of the Portuguese Pointing Dog. Without the passion of a few breeders, it would no longer exist today.

Necessary living conditions and behavior of the Portuguese Pointing Dog

The Portuguese Pointing Dog is above all an outstanding hunting dog who works with courage and consistency. A shrewd collaborator with all hunters, he shows exceptional flair and natural vivacity. It is also a very popular breed as a pet. We recognize him for sociability and kindness. He shows attachment and love towards his masters while being at the same time joyful, gentle and passionate. Since it is not wary of strangers, it is not recommended as a guard dog. To be happy, this dog also needs to evolve in a country environment with a large house and a large garden. Cohabitation with the NAC will be discouraged, because the Portuguese Pointer remains a formidable hunter, even reconverted for the company.

Diet and main health problems of the Portuguese Pointing Dog

Because of its floppy ears, the Portuguese Pointing Dog can be affected by ear infections. He may also develop problems related to demodicosis, a parasitic skin condition. Otherwise, in terms of his diet, it must simply adapt to his lifestyle.

Price of a Portuguese Pointing Dog or Puppy