The red fox did not enjoy a glorious reputation at one time and was even classified as a “pest”. However, it plays a crucial role for the environment. This animal that lives at night participates in the reduction of micromammals such as rodents which destroy agricultural crops. Fascinating, the red fox has not finished revealing all its secrets …

Physical description of the red fox

From its Latin name Vulpes vulpes, the red fox is a mammal halfway between the wolf and the dog. He is not very tall and has a height of 35 to 40 cm at the withers for an average weight of about 7 kg. Its elongated body ends in a long fluffy tail, the end of which is white in color. The red fox also has an elongated and narrow skull with a long, but thin muzzle with a dark nose. It is distinguished by its movable and triangular ears, carried high and which point. These are lined with hair on the inside. The eyes range from amber yellow to green. Another peculiarity of the red fox is its coat. Silky, soft and dense, the fur is also long. It is obviously red, but other colors may exist depending on the subspecies. Thus, we will find foxes with a brown or yellow-beige dress. The underside of the belly, throat and part of the limbs are white in color. At the level of the legs, black remains predominant. On the back of the animal, there is a dark, but discreet line.

The red fox is mainly found in the Northern Hemisphere except in Crete or Iceland for example. It is very present in Europe, but also in Asia. He lives in countries like Algeria or Morocco. It is also very widespread in North America, particularly in Canada. One element that distinguishes the red fox is its ability to frequent all biotopes. We can thus find it in the steppes, the moors, the coasts, the scrub, the cultivated countryside, the suburbs of the cities, the mountains and even in the dunes of the deserts.

The red fox lives in a burrow with its family. He does not stray far from his place of life, except to hunt. 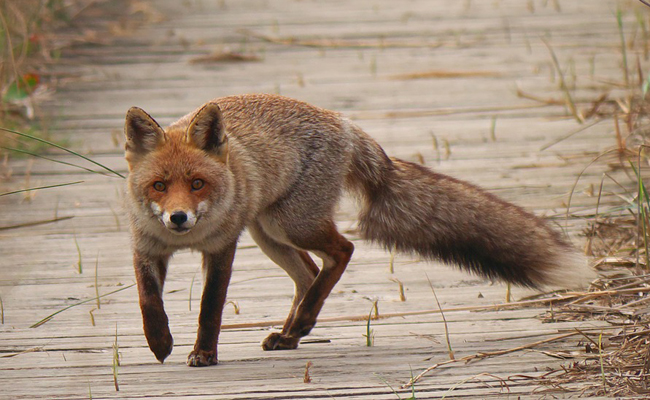 The red fox is a rather nocturnal animal. He develops significant visual acuity in the evening and his eyes even become very bright.

This animal has a unique hunting instinct which allows it to easily catch squirrels, voles, field mice, small hares, rabbits and other small mammals. It is also fond of amphibians, rodents, insects and birds. It even happens that it feeds on waste or carrion. He also uses his sense of smell to hunt. Namely that the red fox holds up to 225 million olfactory cells. It is a rather sedentary being who can live up to ten years in its natural habitat.