The Red Panda, nicknamed fire Fox in China, wears a flamboyant red dress. Although classified as a carnivore, it mainly feeds on bamboo and other foods of plant origin. This inhabitant of the mountain forests of Asia suffers the brunt of extreme deforestation. In addition, he lives very badly with his cohabitation with Man and bears the brunt of the NAC market. The European Plan for Captive Breeding (EEP) from which the Little Panda benefited from 1985 was not enough to protect it. Today it is seriously Endangered.

The Little panda, Ailurus fulgens, belongs to the family of Ailuridae and is the only representative of the genre Ailurus. It is also sometimes called Glowing panda. Its main predator is the snow leopard (Panthera uncia).

Physically, he has some features of resemblance to the Raccoon but also with bears. Its classification has for these reasons always been quite problematic. It was also integrated into the Giant Panda family then into that of the Raccoon before being classified in that of the Ailuridae (Ailuridae).

It has a round and imposing head surmounted by two ears at the pointed end and flanked by white hairs. Its reddish brown fur all over its body, head and part of its tail is much darker on the belly, chest, legs and tip of the tail. White spots are visible on his cheeks, above his eyes and on his muzzle. The color is the same in the male and the female.

Its thick, semi-retractable claws are powerful. They allow him to climb to the highest bamboo and trees to feed but also to protect himself from his attackers.

The male can measure up to 64 cm in length and 28 cm in height at the withers for a weight of 6 kg. The female is smaller and weighs only about 3 kg. 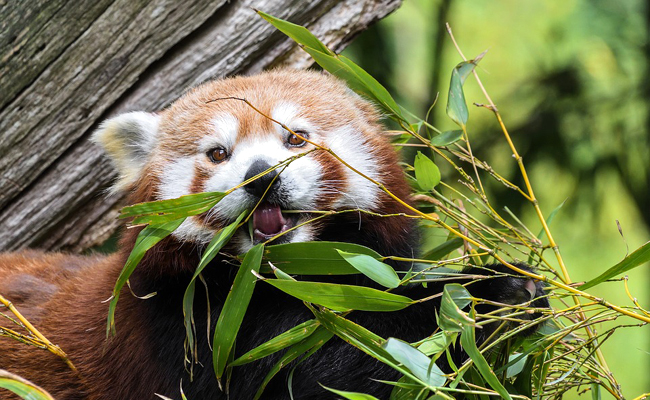 Although belonging to the order of Carnivores, it adopts a omnivorous diet mainly made up of foods of plant origin since it feeds mainly on bamboo shoots because it is the easiest part to digest. Each day, a Little panda can therefore swallow 4 kg of tender shoots and 1 kg of young leaves. It also eats different parts of maple (bark, leaves and fruits), mulberry and beech, berries and various flowers. Much more rarely, it can be satisfied with a few birds and their eggs, or even with small mammals, especially if it lives in captivity. 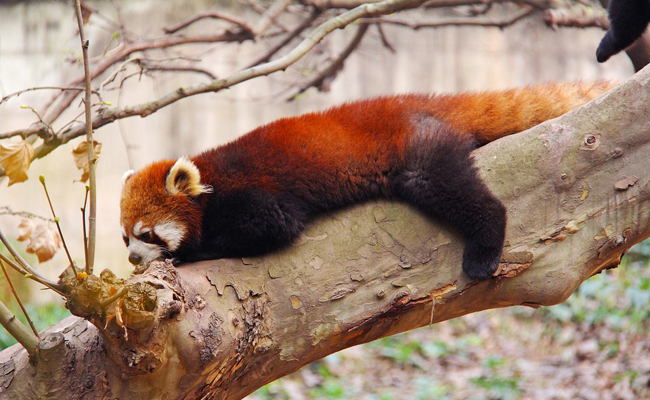 How does the red panda live in the wild?

In the wild, it’s animal is solitary, and encounters between males and females only take place during the breeding season. This takes place in summer in the southern hemisphere and at the end of winter or at the very beginning of spring in the northern hemisphere. After a gestation period of 112 to 158 days (an average of 135 days) during which the female prepares a nest cozy in an interstice between rocks or in the hollow of a tree trunk, four little ones at most are born. Each weighs at most a hundred grams.

Deaf and blind at birth, young red pandas open their eyes for the first time after 18 days. But they remain confined in their den for their first 3 months of life. At this time they are completely adorned with their red and dense fur and gradually come out of their shelter. They gradually discover a food different from breast milk, and more solid.

Although they are fully weaned between 6 and 8 months, they stay with their mother until she has another litter, the following year. She takes good care of her offspring by taking care to breastfeed her babies very regularly, but also to clean them one by one. She is also able to identify them individually because each has its own scent. When pandas live in pairs or in groups, which is rare, it can happen that the male intervenes with his young.

The Red Panda reaches sexual maturity at the age of 18 months but is not fully mature than 2 or 3 years old. His life expectancy average is 13 years in captivity but limited to 9 years in the wild.

Where does the red panda live?

Naturally present in himalayan temperate forests the red panda also lives in mountain ranges of Nepal as well as in some areas of the China, in the autonomous region of Tibet, north of Burma, at Bhutan and in India. However, in China, we have witnessed local extinctions of the Little Panda, especially in the provinces of Qinghai, Gansu, Guizhou or even that of Shaanxi.

In all ranges of the Red Panda, its habitat is threatened. The deforestation is very important there, the wild animal is victim of poaching, and the Man builds more and more dwellings. The animal does not see this promiscuity. In recent years, he has also been very affected by diseases spread by dogs such as distemper for example.

For protect this panda, campaigns and programs have been set up to promote its life in captivity in animal parks. At the same time, the villagers near the nature reserves were made aware of this serious threat to the survival of the species. Local governments are assisted in their awareness campaign by WWF as well as Non-Governmental Organizations (NGO).

Where to observe the Red Panda in France?

In France, we have the opportunity to discover the Red Panda in captivity in many zoos such as the Beauval Zooparc (Loir-et-Cher), the Palmyre Zoo (Charente Maritime), the Le Pal Zoological Park (Allier), the Amnéville Zoo (Moselle) or the Safari Zoo in Thoiry (Yvelines) and many others. In some of these zoos – as is the case for example in 2019 at the Auvergne Animal Park (Puy-de-Dôme), births have been observed, sometimes even thanks to theartificial insemination at the Beauval Zooparc in 2017 which allowed the Little panda Yuan Meng to emerge.