There are at least one hundred varieties of scalars including Pterophyllum scalare. This freshwater fish has a majestic physique that has won over aquarium enthusiasts. Let’s find out about the main characteristics of this strong-personality scalar, and the best way to keep it healthy in an aquarium.

The scalar, Pterophyllum scalare, is a fish that belongs to the family of Cichlidae. It is native to South America and lives in fresh waters. It can therefore be found in marshes, rivers and certain tributaries of the Amazon region. It is found, for example, in French Guiana, Colombia, Peru, Brazil or even Venezuela.

He has a flat delta-shaped body, the height of which is greater than the length, namely a good twenty centimeters over fifteen as soon as he reaches the age of 2 years. This gives it a compressed look. It is recognizable by the long filaments that they have in place of its pelvic fins and by those that extend its ventral fins and dorsal fins.

There are color differences between scalars in the wild and those from farms. The former have black stripes on a silver background. As for the second, they are distinguished either by marbling or by black welts. Some of them sometimes have bluish spots on the fins while others are albinos. But the coloring of this fish can transform in less than a minute or its welts may disappear for example under the effect of stress.

Males and females Pterophyllum scalare are absolutely identical when they are young. It is only at the time of reproduction that the male can be identified by his sexual organ pointing forward during courtship. 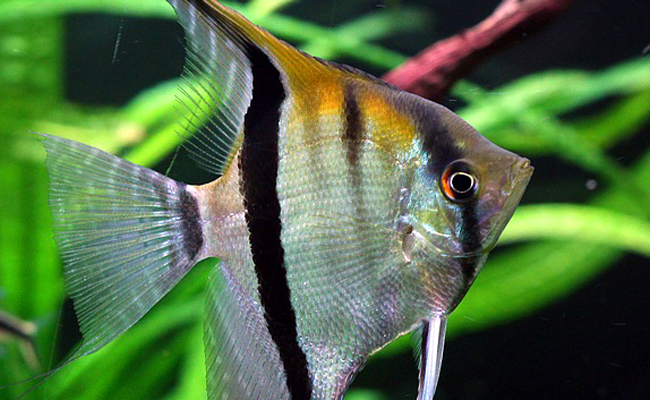 How to breed the scalar in an aquarium

This scalar, whose life expectancy is around twenty years in the wild and 8 years in an aquarium, is very popular with aquarists. It is by far the best known of all the varieties of scalars of the genus Pterophyllium, namely a good hundred. Crosses were made, allowing to obtain very colorful scalars and bearing instead of their filaments genuine sails.

To allow scalars to live in the best aquarium conditions, it is preferable to have at least six or seven specimens. These carnivorous fish appreciate:

If it is recommended to buy a large aquarium for raising scalars, it is because too small a space can lead to:

In an aquarium that is too small, the reduction in the lifespan of the scalars can be substantial.

In the wild, the scalar feeds on small fish, larvae and insects washed up in water. Raised in an aquarium, it is satisfied with a specific food that can be found in stores specializing in aquariums, provided that it is sufficiently balanced and varied. It is therefore preferable to give it frozen food or better yet live food like small crustaceans of type Artemia salina and red worms rather than limiting his diet to glitter.

Larger amounts of live food should be given to young specimens in order to guarantee them good growth. From four meals a day, it is therefore necessary to go to 2 once all the scalars in the aquarium are adults because this predator tends to eat a lot and to grow too fat.

Some newcomers to aquariums give their scalar beef heart to intensify its color. Certainly, the physical result is guaranteed, but this type of diet is very detrimental to the health of the scalar at the digestive level.

The aquarium should always be clean. However, food quickly contaminates the water. We therefore regularly clean the windows, the bottom, the filter. Fish droppings are eliminated when the siphoning is carried out, which can be carried out using a vase bell.

Integration of scalars in the aquarium: the method

When you want to install scalars in your new aquarium, like any other fish, it is essential to create the ideal environment at least three weeks before the arrival of the fish. This limits the stress and the risk of premature death of the animals.

Thereafter, care should be taken to replace approximately 15% of the aquarium water every two weeks. If this task can only be performed once a month, then it is necessary to empty a quarter of the volume of water in order to fill in the same amount of new water. However, the first solution is more favorable to scalars. Then you have to check then readjust if necessary on pH and the temperature some water.

Reproduction of scalars in aquarium

When living in an environment that is perfectly suited to it, the scalar reproduces quite easily. The success is even more certain if one takes care to isolate a couple of scalars the time of the parade in a vegetated tank and equipped with cones of laying.

The female lays her eggs which are then seeded by the male. Once fertilized, they hatch in just three days. It’s time to reintegrate the couple of scalars in the community aquarium so that they do not devour their young.

Finally, the scalar being a fish with a strong character, it attacks many small aquarium fish such as Neons and Guppies. On the other hand, he is less aggressive with fish of the same size as him. Some aquarists associate them with Discus and Tetra.