We call stork the waders of the kind Ciconia which, for the most part, are migratory birds. Among all these species, black stork and white stork are the best known in our latitudes. Let’s take a closer look at these storks to better understand their physical characteristics, their way and their place of life.

The white stork (Circonia circonia) and the black stork (Ciconia migra), of the kind Ciconia, belong to the family of Circonidae (Circonidae). There are other species of stork, less known such as:

Storks collect branches with which they carefully build their nests. These are hoisted a good ten meters from the ground, sometimes even between twelve and fifteen meters. 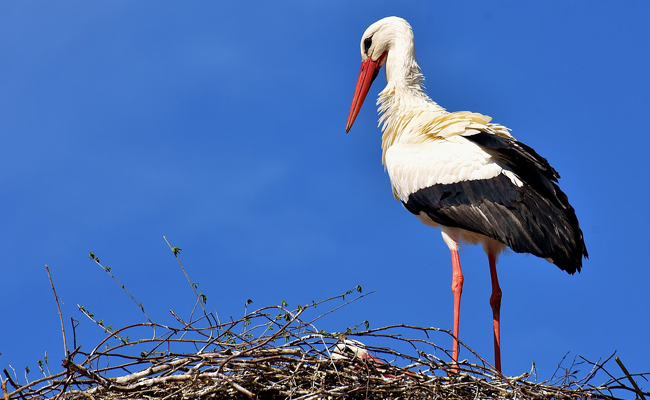 Protected heritage species, the white stork, symbol of fertility according to a medieval belief, is emblematic of Alsace because it instinctively built its nest on the chimneys of Alsatian houses. She can just as easily choose the top of a tree or a pylon. Nevertheless, in the mid-1970s, there were only nine pairs of white storks in this geographic area. Efforts have been made and we are delighted to witness today his great return to Alsace where there are about nine hundred couples.

The white stork is a large migratory bird that can reach 1.15 m in height with a weight of 4.5 kg and an impressive wingspan of 2.15 m. It sports a black and white plumage and red legs, very long and thin. Its beak is red and its eyes circled in black. We cannot distinguish the male and the female because they are so similar physically.

It feeds on small vertebrate animals (mammals and amphibians), worms and insects that it finds in swampy places, cultivated areas and grasslands, but can also draw its food from garbage dumps found during its migration in countries where these discharges are still frequent. This can harm him in terms of health.

Outside of Alsace, white storks are mainly found in Charente maritime, Normandy, Picardy (more specifically in the Baie de Somme) as well as in Lorraine in the Nancy sector.

This migratory bird preferably settles in immediate proximity of where humans live. She migrate to Africa or in Spain, from the beginning of the second half of February until the end of August to return to France to spend the rest of the time. 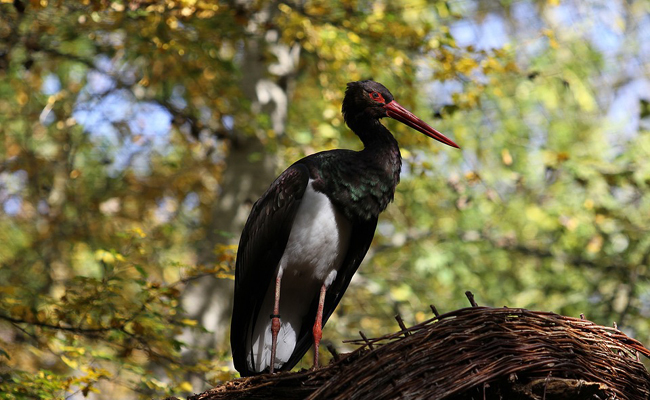 We find the black stork in the Iberian Peninsula as well as in Eastern Europe where it nests in places away from dwellings, more specifically where it finds forests, rocks, streams or ponds.

The black stork is smaller than the white stork, since it does not exceed 1 m in height for a maximum weight of 3 kg and a wingspan of 160 cm at most. It is distinguished by its voluminous plumage and shaggy in terms of his chest which can form a collerette and to its white feathers under the tail (these are the undertail feathers), at the base of the forechest and under the wings (axillary feathers). All the rest of his body is covered with black feathers revealing subtle reflections sometimes purple, sometimes green.

It stands on long red legs of great finesse, and has a bright red beak, long as in all waders. The area around each eye of the black stork is red and completely devoid of feathers. It has a smaller head than the white stork. Apart from a slightly larger size in the male, there is no no sexual dimorphism in this stork no more than in the white stork.

With the exception of specimens living in Spain (and which do not migrate), the black stork migrates between mid-August early September and until mid-March to spend the winter in India or in some African countries such as Mali, the Tunisia and the Nigeria. The older storks leave a little later than the younger populations. To get to these geographical areas, they fly in the heart of hot air currents which allows them to travel 300 km per day, sometimes even up to 500 km.

In general, it is at the age of 3 or 4 years that the stork begins to reproduce. This is the moment when she carefully builds her nest with branches.

The male and the female take turns to hatch the eggs. Brooding lasts 38 to 42 days after which hatching takes place. Each chick weighs a maximum of 75 grams depending on its species. Parents don’t hesitate to kill their weakest chicks, especially when food runs out. The most robust cigogneaux take flight after a maximum of 70 days, i.e. at the end of the period during which they were fed and protected by their parents.

The chick mortality rate is partly related to the weather conditions at the time of the hatching of the stork eggs. The higher the ambient humidity and / or the cold, the greater the risk for the storks. This also counts for the survival of the different species of storks because the chicks born in the best conditions generally produce more storks as adults than the others.

The stork is a migratory wader vulnerable to pesticides and at the pollution in general, at global warming, to the overhead power lines on which many specimens are electrocuted each year. Depending on the species and the country, the stork is an endangered wader, which can be protected or regulated.