The European weasel is a carnivorous mammal that can be seen in mountain pastures, meadows, forests, but also in our gardens. Let’s find out who she is exactly and whether to consider her as an ally of gardeners or a sworn enemy of our cultures. The weasel is a small animal whose usefulness has been proven, but which has suffered from a reputation as a pest for decades.

The weasel, Mustela nivalis, belongs to the family of Mustelidae. It is also called a small weasel or pygmy weasel.

It has a white coat on the neck, belly, and reddish brown on the rest of the body as well as on its short legs, head and small tail. It is distinguished by the irregular demarcation between the two colors of its coat. Its fur during the winter preserves usually the same color that in summer, except in albino weasels or in those who live in regions with a harsh climate such as Siberia for example. It is frequently confused with the ermine although the latter is larger than the weasel.

There is a real difference in size between the male and the female, the former being much larger. At the age adult, its length can reach 26 to 27 centimeters for a maximum weight of 125 grams. As for the female, she measures 19 cm at the most and weighs only 35 to 85 g depending on the individual. The weasel is therefore the smallest carnivorous mammal of the Old Continent. Its small size and its long, tapered body allow it to squeeze into a hole whose diameter is of the order of only 2.2 to 2.5 cm.

In the wild, the European weasel has a life expectancy of three years, but which can reach a good ten years in captivity. 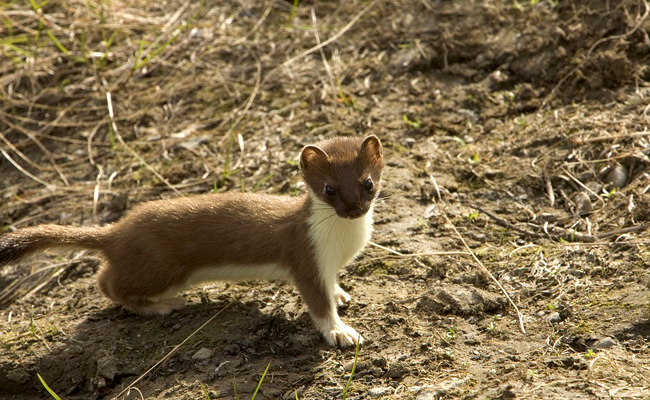 It adapts to almost all biotopes with the exception of large wetlands. We can even meet it up to 3000 altitude. With a vision perfectly adapted to day and night and an ultra fine hearing, the weasel is a hunter emeritus whether in period diurnal or nocturnal. This carnivorous mammal feeds on small rodents and does not hesitate to settle in the burrows of the prey on which it feeds. It also chooses its place of life according to the abundance of potential prey.

Taking up residence in vast areas planted with cereals suits her perfectly since she can feed herself as she pleases with a multitude of field voles of which she is a great predator. It can even be found frequently in our homes (cellar, attic, outbuildings, utility room, laundry room, etc.). She hunts the mouse there. In our gardens, it can devour a shrew and a mole if it has nothing else to eat, but it is ultimately rare.

Aside from the small rodents which represent between 60 and 99% of its diet, the weasel sometimes feeds on lizards, insects, small birds, molluscs, amphibians and even a few eggs. For her, there is no question of hibernating: she must eat every day of the year. But it is the field vole that attracts him the most. Thus, where the vole is in abundance, there are usually a lot of European weasels.

To monitor the surroundings, this mammal which lives mainly in solitary adopts the “I” position, that is to say, it rises to appear taller and see as far as possible, like the meerkat. Very small, the female weasel who watches over her little ones does not hesitate to attack humans or an animal much larger than herself. She is as lively as she is courageous, and shows unfailing dynamism. 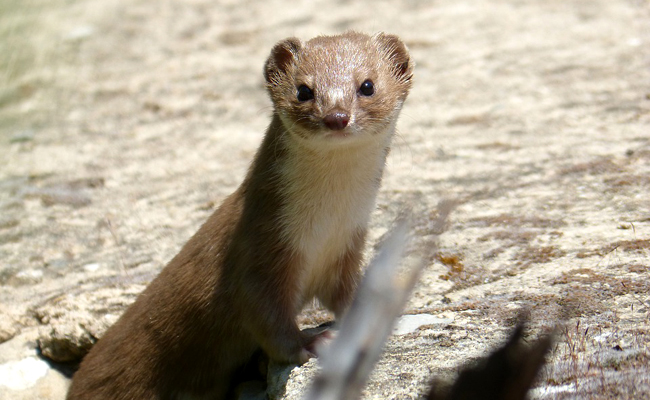 Reproduction of the weasel

It is between March and June / July that takes place the period of reproduction in the weasel, period during which a mother can have two litters. Each litter has between 4 and 7 young, sometimes up to 10 if food is flooding (especially voles). The female prepares a nest cozy with leaves, moss and hay or set up in a terrier of voles.

After 5 or 6 weeks of gestation she gives birth to completely hairless young. But in just a few days, their initially silvery gray coat begins to appear. Blind at birth, the young of the weasel only open their eyes when they have reached the age of 4 weeks, when they have already had their first teeth for a good two weeks.

The education of the baby weasels is entirely devolved to the mother who teaches them to hunt effectively, although the hunt is instinctive in these carnivorous mammals. Weaned very early, they are completely autonomous from the age of 2 1/2 months and it is at this time that they leave the family nest. At 1 year, they reach their sexual maturity.

When she prowls around a henhouse, contrary to popular beliefs of another time, it is only to chase away the seed-hungry rats that they find in abundance in the feeders, but in no case to seize of a poultry. The weasel is bound to be a hen killer. On the other hand, if a reckless rooster were to attack her to protect her barnyard, she would be quite capable of to defend oneself and win the battle. As for wildlife, it is absolutely not threatened by the weasel.

Theusefulness of the weasel has been widely proven by scientists, while this animal is still too often classified as a pest. However, if the number of individuals were to drop, we could only witness an upsurge of voles and other small rodents, real crop destroyers capable of damaging the economy of farmers.