In a term of office, the “first 100 days” are always the most conducive to change. Already, the beginnings of the Biden administration allow us to identify some elements on the orientations of economic policy.

Many alumni of the Obama era like Janet Yellen, now Secretary of the Treasury but who had been appointed president of the Fed in 2014 by Barack Obama, or even Isabel Guzman who now heads the SME Agency ;

Representatives of the right wing of the Democratic Party such as Neera Tanden the Director of the Budget, or Gina Raimondo the Secretary of Commerce who had initially co-directed Mickael Bloomberg’s campaign in the Democratic primary;

And in contrast, very few supporters of the progressive left wing, with the exception of Labor Secretary Marty Walsh, a former trade unionist.

This composition of the economic team may raise concerns that J. Biden’s term is in fact a “third Obama term”. However, the first proposals show that J. Biden is not B. Obama, and that there is an awareness that the main stake is to reduce the social divide. The budget support plans will be quite simply exceptional:

The 1,900 billion USD emergency plan represents 8.6% of GDP. It comes on top of last year’s fiscal impulse of 6.6% of GDP and the ongoing complementary plan of 3.4% of GDP (Chart 1). This Biden plan is being negotiated, but a forced passage is possible via the procedure known as “Budget reconciliation”. The composition of this plan clearly shows support to households with the distribution of checks for 2% of GDP and an extension of unemployment insurance representing nearly 1% of GDP (Chart 2). 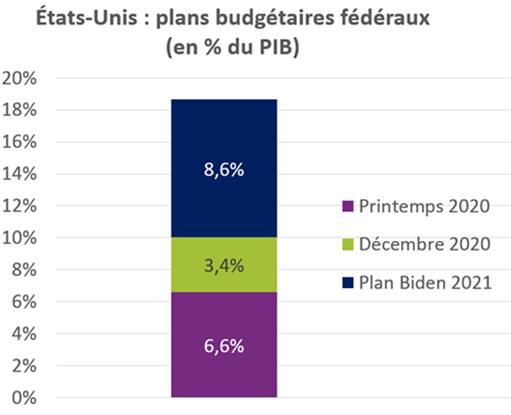 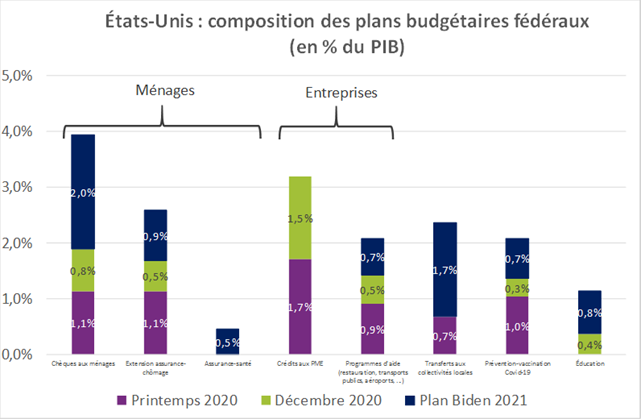 The tax program could accentuate this inflection of “made in America” and the redistribution of the wealthiest households towards low incomes. On the one hand, its program envisions a relocation tax and relocation subsidies in the form of tax credits to support US manufacturing production. On the other hand, the measures on household taxation should include an increase in the marginal tax rate from 37% to 39.6%, as well as an increase in the tax on capital gains and dividends for income above 1 million USD. Politically, an even more left turn is very likely after the midterm elections at the end of 2022.

While the priority of the Biden administration is undoubtedly the domestic domain, geopolitical subjects are factors to be monitored, mentioned elsewhere in our balance of risks. J. Biden’s team is undoubtedly Atlanticist like Secretary of State A. Blinken, and diplomacy will be calmer in its form. However, the balance of power with China is now established, and American diplomacy will be quickly tested on the subjects of Iranian nuclear power and North Korea, its relationship with Russia and the renovation of multilateralism under increasing pressure from China , India, Indonesia and Latam.

In the end, J. Biden probably currently assumes the greatest economic and social responsibility since F. Roosevelt. The scale of the plans evokes a “New Deal-type Moment”. The main risk is even triggering a positive demand shock causing price pressures.