The llama and the alpaca are two camels that are not easily distinguished from one another, especially for those who do not see them every day. Yet they are indeed two different animals. How can we tell them apart? And beyond their appearance, what are their distinctions?

The llama and the alpaca: common points and major differences

Neither the llama nor the alpaca are ruminants, and they have no connection with sheep, despite their thick fur which may suggest it. They are in fact both domestic animals belonging to the camelid family, such as camels and dromedaries. They are therefore herbivores.

Anatomically, the surest way to tell them apart is to identify the shape of the ears. Straight and short, it is the alpaca, curved forward, it is a llama.

The llama is found in South America, confined to the part of the American continent located south of the Panama Canal. It can measure up to 1.7m high, from the tips of the front legs to the top of the head, weighing between 120 and 180 kg. Its skull resembles that of a camel but smaller. He lives between 10 and 20 years.

In the countries of South America where it is present, it is used as a beast of burden. But it cannot carry more than 30-40 kg. If the load is properly distributed on the back of the animal, the llama can walk in this way loaded between 4 and 6 hours per day. It is also used to clear the land, guard the herds. It is exploited for its wool and its meat.

Llamas are said to be smart enough to quickly learn what is expected of them. They have well-marked individual characters that require adapted learning. With a curious temperament, this animal is discreet and of a silent presence. Contrary to what Hergé made us believe, the lama only spits to defend himself – and not because he would be in a bad mood – and he rarely does so on humans. It is rather a behavior mobilized to communicate between lamas.

The classic llama is the largest and the least woolly. His hair is very short on the head and ears. It has a fine undercoat that falls during the moult and guard hairs, which protrude from the fleece, fine and slightly wavy for the longest of them. This type of fleece is referred to as “double coat”.

The wooly llama, or woolly llama, has abundant wool forming a dense coat on the head, body and upper legs. The hair is provided and curly evoking the coat of sheep.

The medium wool llama was created by crossing a classic llama and a wooly. This llama has a double coat and sheds like the classic llama. But the results vary greatly from one individual to another, both in terms of size and woolly blanket. The hair is usually the longest on the neck and body.

The Silky Llama is heavily woolly and has a shiny coat. Its hairs are long, arranged in strands, and little curly. Most of these llamas now have only a simple coat.

Finally, there is the Suri lama with wool made up of long thin strands, more or less twisted, very distinct from each other, which gives it a “dirty” appearance. Like the Silky, this llama has a simple coat. 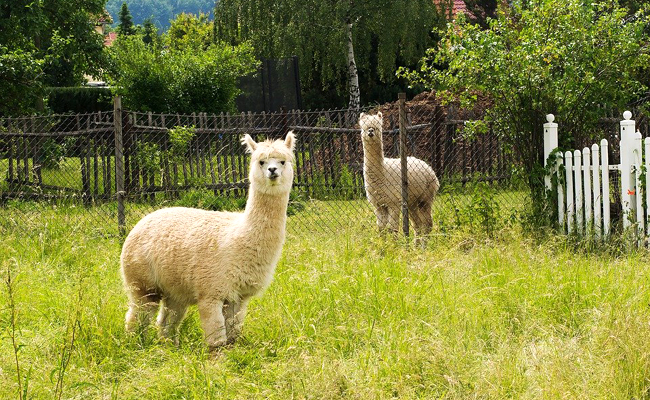 The alpaca is the smallest of the camelids. Its size is between 10 and 35 cm smaller than that of the llama. The ideal silhouette of the alpaca fits into a square, the height at the withers being equal to the length of the back.

Its woolen blanket is wider than that of the llama because it is covered with it from the head to the bottom of the legs. It is its fine, soft and warm fiber that interested man and provoked his domestication. The man therefore carried out selection work to gradually improve the quality of the wool. Alpaca is also useful for maintaining land.

The huacaya alpaca looks like a soft toy. Its dense wool grows in strands perpendicular to the body.

The suri alpaca has a slimmer and more slender silhouette than the huacaya. Its fleece resembles that of the llama of the same name: it forms drooping wicks, grouped in bundles. Depending on the individual, the strands more or less straight, more or less swelling.

The wool of llamas and alpacas

These animals are more and more present in France, but not only in zoos. In fact, lamas and alpacas are growing there, offering activities for children but also wool-based products.

The fiber of alpaca wool is between 15 to 25 microns, which is the second fiber the finest behind the cashmere. For this reason, some restrict it to the manufacture of light products such as scarves.

Both wools are lacking in lanolin, the fat also called “ooze” found in sheep wool. This makes them naturally hypoallergenic raw materials.