The scolopacidae constitute a family of birds, some of which have very similar names: this is the case of woodcock, snipe, snipe and sandpiper. There is something to get lost in! Let’s take a closer look to focus here more specifically on the woodcock and snipe.

Woodcock constitute in themselves a subfamily, that of scolopax, when snipe shares that of gallinago with the snipe. They are all small waders qualified as shorebirds, that is, they feed on animals they find in areas of silt and humus.

Woodcock are divided into 8 species.
The species found in France is the woodcock, a migratory bird present on our soil from October to the end of March-beginning of April. It can be hunted throughout the European Union but it is difficult to catch because it is a discreet bird, which is more nocturnal, thanks to a view as efficient as in daylight and covering 360 °.

As its name suggests, it is a bird that evolves mainly in a forest environment, in woods where there is a lot of moist soil and dead leaves. To be more precise, during the breeding season, it frequents exclusively forest environments such as large deciduous beds, mixed forests, young coniferous plantations as soon as the soils are cool and humid, while during the rainy season, the he bird frequents woods and forests during the day, to invest in open areas such as meadows, once night has fallen. It is there that it finds something to eat: earthworms at 80%, but also insects and larvae, such as beetles, earwigs, caterpillars, or even spiders and centipedes.

It is its plumage that makes it particularly difficult to observe because it mixes brown, red, gray, beige and black tones, which allows the animal to blend in with its surroundings. Because on the flight side, it is noisy. What often saves him is that he’s fast.

In terms of measurements, it is a bird whose length is around 35 cm for a wingspan of about 60 cm. The bird is short on legs and its beak is between 6.5 and 7.5 cm long. Its weight ranges between 280 and 420 g in adulthood, no external sign to differentiate a male from a female.

The term snipe actually designates three subspecies. They are quite similar to woodcock although smaller and perched on proportionately longer legs. Woodcock and snipe are migratory birds. Unlike snipe, woodcock live alone. The plumage of woodcock and that of snipe is quite similar with a few nuances: all these birds are remarkable for their camouflage capacities. 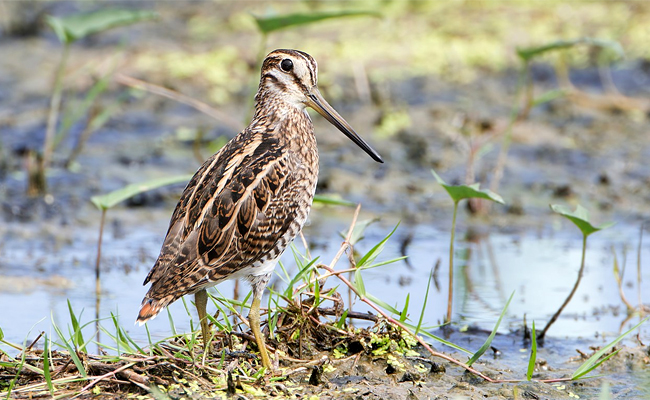 The snipe likes marshy areas, but is not limited to it, since it is also found in grazed meadows. It is very present in France. Smaller than the woodcock, it measures only 25 to 27 cm long. Its wingspan is between 40 and 50 cm and weighs around 100 g. Its beak is long, measuring twice the width of its head. If its flight is lighter than that of the woodcock, given its more modest weight, it accompanies it with a not very discreet cry. It then flies in a recognizable zigzag pattern. Like all snipe, it searches for food in soft soils. Its diet consists of worms, larvae, molluscs, crustaceans and seeds of aquatic plants.

The deaf snipe is smaller than the common snipe. The bird measures 17 to 20 cm in length with a wingspan of between 30 and 36 cm and a weight between 50 and 80 g. Male and female are identical, sporting darker plumage than that of the Common Snipe. The bill of the Common Snipe is only about 4cm, which is short compared to that of the Common Snipe and the Woodcock. The deaf snipe sometimes rubs shoulders with the common snipe. It is their escape tactics that differentiates them: the common snipe takes off at the foot of danger when the deaf snipe usually leaves in the legs. In addition, the deaf snipe has a pointed tail which is well distinguished from the fan-shaped one bordered in white of the common snipe.
Its preferred environment is quite precise: it needs a layer of water less than 2 cm bathing dense vegetation 25 to 40 cm high. It will therefore be found in areas of tundra, peat bog, reed bed, wet meadows with sphagnum meadows, pond tail, pond edges, muddy shores, rice fields … During the breeding season, it will be found more edge of large sedge marshes, sphagnum mosses, small birches, willows, as well as large bogs. This bird consumes invertebrates (larvae of insects such as Diptera and Coleoptera), molluscs (aquatic and terrestrial gastropods), worms (mainly earthworms, nereids), crustaceans, seeds and plant debris.

There is a third species of snipe: the double snipe, protected in France because extremely rare. It looks a lot like the snipe, although it is larger and bulkier, but its bill is shorter. Its behavior in the face of danger is also different: it flattens itself against the ground instead of taking off. It breeds in the northern half of Europe and then overwinters in sub-Saharan Africa, able to fly without stopping over long distances. Observations showed that these birds could hold the average speed of 97 km / h for 96 hours non-stop. This is only possible for them thanks to the large reserves of fat they accumulate in Europe, up to doubling their weight.

Snipe receive special attention. In 2006, a network for monitoring the populations of common snipe and deaf snipe was set up in France with the aim of studying their migration, wintering and breeding areas. Since 2017, a partnership between the French Office for Biodiversity and the International Club of Snipe Hunters has made it possible to further observations, in particular by equipping birds with beacons. There is no doubt that the study of these birds will reveal fascinating information!