The ostrich and the emu are two birds that cannot fly. As they are not birds belonging to the landscape familiar to Europeans, they are generally similar in appearance to us. However, these are very different species.

Ostrich and emu belong to the same branch

It is the International Ornithological Committee, composed of 200 ornithologists which defines the classification of birds. It is regularly updated, evolving with scientific discoveries. Many recent major changes are rooted in research related to animal DNA. The study of species is far from complete and future changes will occur. What we are telling you here is based on the current state of research.

All birds are classified in the same biological class, that of Aves. Birds are characterized by a skeleton, the use of two legs, the presence of wings and a toothless bill.

Among modern birds (as opposed to prehistoric birds), there are two groups: that of the paleognaths (or Palaeognathae) and that of neognaths (or Neognathae). It is to the first, the paleognaths, that the ostrich and the emu belong. In fact, this group includes four lines of birds that still exist, all of which have lost the ability to fly: they are called “ratites”. It is also associated with a group of flying birds, the tinamous.

What characterizes birds that no longer fly is the absence of wishbone. It is a part of the skeleton, an extension of the sternum, which is for this reason also called “sternal crest” or “keel of the sternum”, on which are inserted the powerful muscles necessary for the use of the wings for the flight.

But this common point between ostrich and emu is the only one: they are two very distinct birds and there are many differences between them.

The ostrich is the largest and fastest living land bird

Within the paleognathic group, ostrich and emu are not placed in the same family. The ostrich alone constitutes the family of Struthionidae. It is not yet certain whether the two species of ostrich that still exist, the African ostrich and the Somali ostrich, are really distinct. The African has a red neck and legs, while that of Somalia has a gray neck and legs.

The African ostrich is considered the largest living bird today. It can indeed reach 3 meters high and weigh up to 135 kg. More commonly, a female ostrich measures 2 meters and a male 2.80 meters.

Thanks to long, very muscular legs, each ending in two fingers, she can run at the speed of 40 km / h for half an hour. Its top speed can even briefly reach 90 km / h, allowing it to escape a lioness. She can jump 1.50 meters in height and 4 meters in length.

Its powerful paws are used to defend itself when speed is not enough: an ostrich can kill a lion with a kick of its paw. There are on average two deaths of men per year by ostriches who wanted to defend their territory. 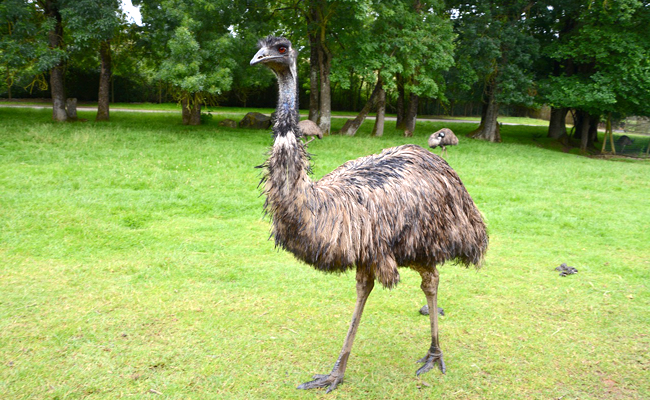 The Australian Emu alone constitutes the family of Dromaiidae.

It can reach 2 meters high: this is why it is the second largest land bird in the world today, behind the ostrich. Its top speed does not exceed 55 km / h.

Emus are very close relatives of cassowaries which are found mostly in New Guinea. The inner toe ends with a claw that can measure up to 10 centimeters, used as a weapon. The legs of emus also end in three fingers, but none of them are equipped with a claw like that of the cassowary.

Emus and ostriches occupy distinct areas of the globe: the former are found in Australia and the latter in Africa.

The emu moves much more than the ostrich, to the point of being considered nomadic. He can, however, show a sedentary lifestyle if the conditions are favorable. The ostrich is sedentary, although some groups can travel long distances during dry periods.

The plumage of the emu is clearly distinguished from that of the ostrich. If they are side by side, this is the main way to tell them apart. The feathers of the emu are double. All its plumage has a fine and light appearance. While the neck and thighs of the ostrich are devoid of feathers, those of the emu are covered, except for a part of the neck where a bluish skin appears.

Ostriches are primarily herbivores, but can get away from this diet by swallowing anything that can come within reach of their beaks. The emu is more frankly omnivorous, consuming plants and animals, even if the former generally constitute the largest part of the diet. In summer, it eats large quantities of insects (grasshoppers, ladybugs, caterpillars, ants …) as well as small vertebrates. It can also be coprophagous occasionally, that is, it can consume excrement.

The ostrich needs a lot of water to live. If this becomes scarce, the animal then falls back on plants that will be able to provide it, salty and juicy succulents, as well as fruit. For the emu, the need for water is much lower and it resists the lack of water much better than the ostrich.

The ostrich is unfortunately one of the endangered species of disappearance.
The emu, on the other hand, has a completely different destiny, because of the fact that it reproduces well in captivity. It was in 1987 that the commercial farming of emus began in Western Australia. This animal is also bred in the United States, Canada, Peru, China. It is usually slaughtered between 50 and 70 weeks of life, when it has reached a weight of around 50 kg. Emu meat is sought after because it is low in fat and cholesterol. But emus are also bred for their leather and their fat, the latter entering into the composition of many cosmetic products and medicines.