While everyone generally knows what a kangaroo looks like, the picture is less sharp for the wallaby. Is it also a kangaroo? We explain the differences between the two animals.

Use of the term “kangaroo”

Kangaroos belong to the macropidae family, a term made up of macro which means tall, and of pid which means foot. It is a special family within the group of marsupials which includes various animals like the opossum or the Tasmanian devil. The characteristic of this group is the development of the young within a pocket called marsupium which also shelters the udders.

Kangaroos in the strict sense are divided into 4 species:

They are the largest species of macropids.

But the term “kangaroo” is also used in a broad sense. This can indeed be a generic term which encompasses, in addition to the 4 species of true kangaroos, 63 other species of the macropodidae family. Wallabies are one of them, as are wallaroos, tree kangaroos, pademelons and quokka.

Kangaroo / wallaby: a difference in size

Like all macropids that are not kangaroos in the strict sense, wallabies are smaller. The largest known kangaroo measured 2 m for 90 kg. But kangaroos are more commonly six feet tall. And this only concerns the males who are double in weight, and in size, of females. The older ones are able to jump 3.30 m in height and 9 m in length. This is quite close to human records: 2.44 m for height and 8.90 m for length.

The most common of wallabies is Bennett’s wallaby. The male measures 1 m for 27 kg. Size excluded, this wallaby can be confused with the kangaroo giant : their body has fairly close proportions and their coat is similar. 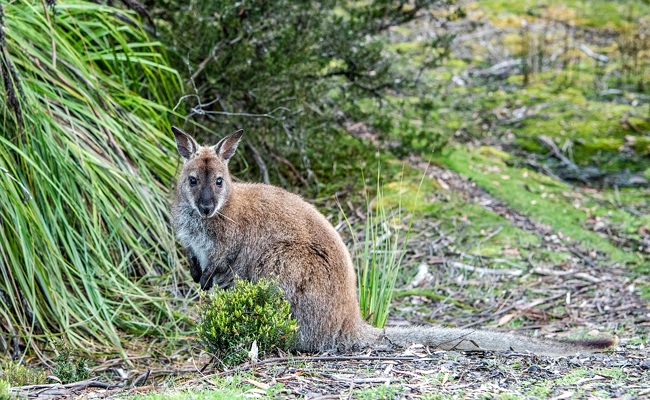 Bennett’s giant kangaroo and wallaby both occupy the eastern seaboard of Australia. In its original distribution, Bennett’s wallaby is found only in south-eastern Australia, Tasmania and a few islands between these 2 countries. Kangaroo and wallaby occupy various territories, from the coastal scrub to the savannah. They both have a coat quite thick in gray tone. The difference in color between the darker back and the lighter face is a bit clearer in the wallaby.

Life expectancy is greater for Bennett’s wallaby than for the giant kangaroo: while the former can live up to 15 years, the latter can only hope to live up to 10 years. Both species know only a few predators and reproduce well. They are therefore not endangered species. They can even be considered in some areas as pests. They are indeed herbivores which sometimes compete with the grazing herds. Their hunting is therefore authorized.

The giant kangaroo lives in small groups of about ten individuals dominated by a male who watches over a few females and their young, as well as a few immature males. Bennett’s wallaby is more lonely. If an area is abundant in food, several wallabies can however congregate up to about thirty individuals.

The amazing reproduction of kangaroos

While “true” kangaroos can give birth to a litter of up to 3 cubs, wallabies generally only give birth to one juvenile, two being rare. The gestation period is for the two animals about thirty days.

But at this stage, the development of the little one is just beginning because it weighs less than 1 g. Hairless, hind legs and tail incomplete, the embryo looks like a little pink caterpillar. Once the umbilical cord is cut, it goes to the mother’s pouch without anyone really knowing how.

It then clings to one of the 4 pacifiers and stays between 8 and 9 months in the pocket to build its final appearance. If the environment is not favorable at birth, because food is reduced for example, the development of the embryo can be suspended for 11 months and then resume. Once the youngster is well trained, he can get out of the pocket to start exploring the outside world, while retaining the possibility of taking refuge there.

It is only when it is weaned that it stops returning there, without straying too far from its mother that it will not leave until sexual maturity.