Intelligent, sociable and blessed with beautiful plumage, parrots are birds that many people wish to have in their homes. Despite everything, the acquisition of a parrot must be considered, because it does not require the same care as more “classic” birds such as parakeets or canaries, they require much more attention and maintenance. But what species of parrots can you keep at home? And what are their characteristics? This is what we will see in this article.

The gray of Gabon or jaco parrot (Psittacus erithacus) is a parrot of the Psittacidae family. This parrot, known for its uniform gray plumage and red tail, is native to Central and West Africa. In the wild, it lives in the forests of these regions, along with its cousin the Timneh Gray, in large groups made up of several hundred individuals.

The gray of Gabon is frugivorous and granivorous, it feeds on seeds which it finds in human plantations, and on fruits present in the forests which it populates. On average, it measures between 35 and 42cm, weighs around 410g and generally lives for 30 years in the wild, although there are individuals, especially in captivity, which, if well maintained, can live up to 80 years.

In captivity, the Gabonese gray is the best-selling parrot in France. This bird fascinates because it has an extraordinary learning capacity. However, you will have to take the time to educate him every day, and spend a lot of time with him. Being a sociable animal, the Gabonese gray does not support loneliness for too long periods. To teach him to speak, nothing better than to repeat words to him over and over, until he remembers them and repeats them.

Given its great popularity, regulations have been put in place in France regarding the acquisition of a Gabonese gray. Today, it is in Annex 1 of the Convention on International Trade in Endangered Species of Wild Fauna and Flora (CITES), which means that its trade has become prohibited. Find out more from the DDCSPP (Departmental Directorate for Social Cohesion and Population Protection). 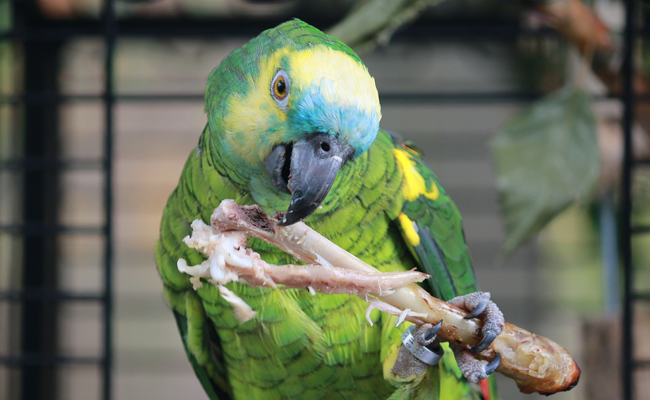 The blue-fronted Amazon (Amazona aestiva) is part, like the Gabonese gray, of the Psittacidae family. It is certainly the second most famous parrot, especially for its magnificent plumage, green, scaly yellow on the ventral parts, sometimes the shoulders and around the eyes. Finally, his forehead is colored a pale blue, hence its name.

The Blue-fronted Amazon is native to South America, where it inhabits the rainforests from Brazil to Paraguay and from Bolivia to Argentina. It feeds on seeds, berries and fruits that grow in its natural environment. It averages between 35-40cm, weighs around 450g and has a lifespan in the wild of around 40 years, but just like the Gabonese gray it can live up to 80 years if properly cared for. captivity.

In captivity, the Blue-fronted Amazon is not for everyone. While he can be very sociable, playful, and endearing, he can also be very destructive and loud. It is therefore not a very suitable bird for apartment living (neighbors may be inconvenienced by its noises). He will therefore need a master or mistress capable of handling his changing moods.

The Blue-fronted Amazon is also able to speak. Even if this faculty is less developed than in the Gabonese gray, it is possible to teach it a few words, at least in some individuals, because others are simply not capable of it.

The Blue-fronted Amazon is a very curious bird, and its way of expressing it is to nibble anything that interests it. So remember to give him all kinds of toys to abuse in his cage, and be very careful if you let him out, because he could be attracted by an electric cable.

Last point, the blue-fronted Amazon tends to be overweight, so pay attention to the amount of food you give it as well as the rate of fat in it.

The animal is protected by Appendix II of CITES or Washington Treaty. 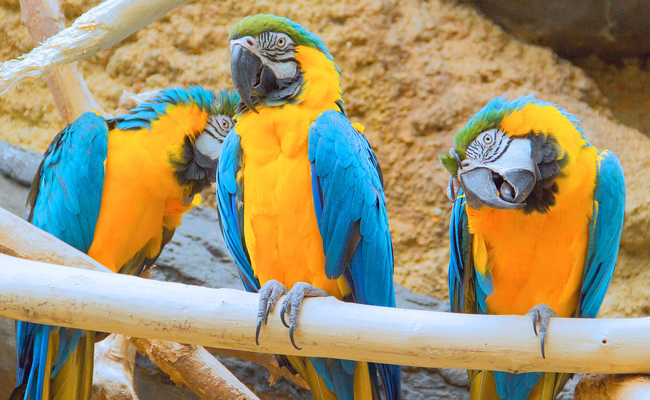 The blue and gold macaw

The blue and gold macaw (Macaw ararauna) is also part of the Psittacidae family. The blue and gold macaw is not represented that much in captivity, but it is well known for its natural beauty. Indeed, the latter has electric blue plumage on the back and wings, bright yellow on the ventral parts, and a white face, streaked with black.

In the wild, this parrot is native to the southeast of Panama to the state of São Paulo in Brazil, i.e. from the southern end of Central America to western America. from South. He lives in a group, as well as in a couple which, once formed, never separates, even in full flight. It feeds on seeds, nuts and berries found in the forests of these regions.

The blue and gold macaw measures about three feet, and weighs 1.3kg on average, which is quite heavy for a parrot. It lives an average of 60 years in the wild, and can live up to 80 years in captivity.

You will need to be well prepared to welcome a blue and gold macaw at home, because the weight and size of the latter require a fairly large cage. In addition, being an animal that lives in a group in nature, it does not support loneliness for too long a period, and can become very noisy, or conversely, start to be severely depressed. So you have to be prepared to spend a lot of time with him and keep him busy.

Beside that, the blue and gold macaw is an outstanding acrobat, a very good speaker, also able to learn tricks. It is one of the smartest parrots, so it will never cease to amaze you.

The blue and gold macaw is protected by Appendix II of CITES or Washington Convention (Appendix II).

The Roseate Cockatoo (Eolophus roseicapilla) is a bird that is part of the Cacatuidae family. Its rather particular color has earned it a certain interest from enthusiasts, since its plumage is gray on its back, its wings and its face, but its entire ventral part is pink.

The roseate cockatoo is native to Australia, a continent on which this species is very numerous. It feeds particularly on fruits and seeds, and something unusual for a bird, it avoids wooded areas, staying on the edges of forests or in the few isolated trees of the plains, while also inviting itself in the heart of the city. This parrot measures on average 35 to 40cm in length, weighs between 300 and 400g and generally lives 40 years in the wild, being able to go up to 60 years in captivity.

The roseate cockatoo has coped well with life in captivity. Even if it requires a lot of attention, like all parrots, the Roseate Cockatoo is not very noisy (despite its few moments of madness), and it is very playful and accomplice with his or her masters. However, it will be happier as a couple, and it will be necessary to give it toys that it can put in its beak, because just like the blue-fronted Amazon, the rosy-blue cockatoo is very curious and likes to put whatever it finds in it. his beak.

You now know the main species of parrots that you can own at home. Remember however, deciding to adopt a parrot is not trivial, they can live a very long time, require a lot of care and attention. In short, when in captivity, they are very dependent on the presence of humans, so think carefully before embarking on the adoption of such an animal, no matter how beautiful.