The essential difference between gazelles and antelopes is that all gazelles are antelopes while not all antelopes are gazelles. Beyond these groupings, we give you elements to find you there in names which remain very confused.

Antelopes refer to a group of animals that are all ruminant mammals and are found in different places on the planet: Africa, Asia or North America.

The term often refers to animals of the subfamily of Antilopinae, among which antelopes, gazelles, ourébis, procapras. But common language can designate as “antelopes” animals from close sub-families such as impalas, wildebeest, oryx, and even some cattle.

In the broadest sense of the term “antelope”, the smallest is the Dik Dik, 35 to 40 cm for a weight of 3 to 5 kg, and the largest is the eland (and not elk!) Of the Cape whose weight can reach 800 kg. With its massive neck, its silhouette is similar to that of the cow, and it is quite logical since it belongs to these species of cattle assimilated to antelopes.

The springbok, also called a dorsal pocket gazelle, is probably the fastest of the antelopes, capable of reaching speeds comparable to those of the cheetah. The two animals can exceed 110 km / h at peak, reach 90 km / h on average, and 50 km / h over longer distances. Suffice to say that the race is tight. But if the antelopes do get caught, they can fight to the end and manage to save their lives thanks to well-placed horn blows in the flanks of their attackers. 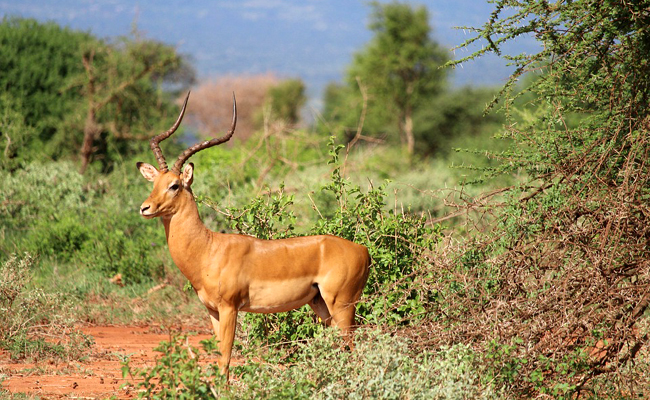 The term “gazelle” comes from a Persian word with very similar sounds, meaning “elegant and agile ”. Their legs and neck are long and slender, the head has elongated horns, usually ringed. Since ancient times, the gazelle has been an animal whose symbolism is closely linked to love.

Gazelles are divided into 17 species. The best known are Grant’s gazelle, Thompson’s gazelle, and Dorcas gazelle. The latter is the smallest and lives in the Sahara. In contrast, the Dama gazelle is the largest species of African gazelle, but it has, alas, become rare.

Grant’s gazelle is well representative of African gazelles. It is found in the east of the continent, but also frequents semi-deserts and mountainous areas, up to 2,500 m altitude. She can rub shoulders with Thompson’s gazelle, without ever hybridizing with her.

The males are larger than the females: the former measure between 86 and 97 cm at the withers, and weigh between 40 and 80 kg, while the seconds measure 10 cm less at the withers, for a weight not exceeding 50 kg. Their coat is sand colored on the upper half of the body and white on the lower half. Their coat is short. The horns of males measure 60 to 80 cm against 30 to 40 cm for those of females.

How does the gazelle resist drought and heat?

Herbs and leaves constitute their diet, but it is interesting to observe a difference in strategy between Grant’s gazelle and Thompson’s gazelle, which can live together without competing.

Thomson’s gazelle is smaller than Grant’s and if the grasses are too tall, such as in the rainy season, they can no longer feed. They then follow the zebras and wildebeests in their journey to find young shoots rich in protein. They favor grasses. Grant’s gazelles, on the contrary, favor the twigs, digested thanks to developed salivary glands which allow them a dry diet.

Of all the ungulates living alongside them, gazelles are the animals that are most resistant to heat and drought. Due to its larger size and weight, Grant’s gazelle needs a third more water than Thompson’s gazelle. During the dry season, it forages at night to collect the dew deposited on plants, which can constitute up to 10 liters per night. Obviously, during the rainy season, puddles are enough.

This water is used to cool the brain, while the rest of the body rises in temperature, up to 46 ° C. The cooling of the motor organ is achieved by a nasal evaporation system which is the same in humans in whom “optimal nasal ventilation” sets the objectives to be achieved by dentofacial orthopedics when disorders occur.