Watching a whale in its natural environment is an experience that will never be forgotten. These immense marine mammals weighing more than 45 tons seem to move so fluidly in the water despite their disproportionate size that it offers a breathtaking spectacle.

Unfortunately, France is a country that sees too little passing these magnificent creatures near its coasts. Here is a list of places where you can go on a trip to observe whales in their natural environment for those who have decided to go on an adventure.

The Bay of Biscay: observe whales off the French coast

The Bay of Biscay is a maritime space located between Brittany and the Cantabrian coast (the coasts of the north of Spain.) This Gulf of the Atlantic Ocean is known to shelter all kinds of marine species, and in particular many cetaceans. . It is also the only place in France where you can expect to meet whales.

We can see mako sharks, common dolphins with short beak, but not only. The Cuvier’s beaked whale is also present there, although it is very discreet and therefore not very visible. For the lucky ones, you can even meet a macrocephalic sperm whale.

But what really spices up the sea trips in the Bay of Biscay is the hope of meeting blue whales or even orcas, which sometimes take a tour in this area of ​​the Atlantic Ocean.

In the great American North is Alaska, a polar region in which all kinds of whales migrate during the summer months.

While venturing on the many islands of the south-east coast of this beautiful frozen space, you will be able to meet very regularly gray whales, orcas or even humpback whales.

Some tourist companies even suggest going to observe them more closely by kayak. Thrills guaranteed.

Vancouver Island is an island located off the city of Vancouver in southwestern Canada. It is also the largest island in the North American Pacific.

This area is populated by a very rich and diverse marine fauna. Many excursions are offered there to meet several species of dolphins, rare birds and other sea lions.

In addition to all these species, you can observe rorquals or humpback whales that roam this frozen sea. Visiting the coasts of Vancouver Island is sure to make great encounters.

In the southeast of Vancouver Island we were talking about earlier is Orcas Island. This island off Washington State, United States, is very popular for viewing all kinds of marine life.

In spring and summer, the seawater lake of this island is populated with numerous gray whales and orcas, which can easily be observed from the coast, or even via boat trips. 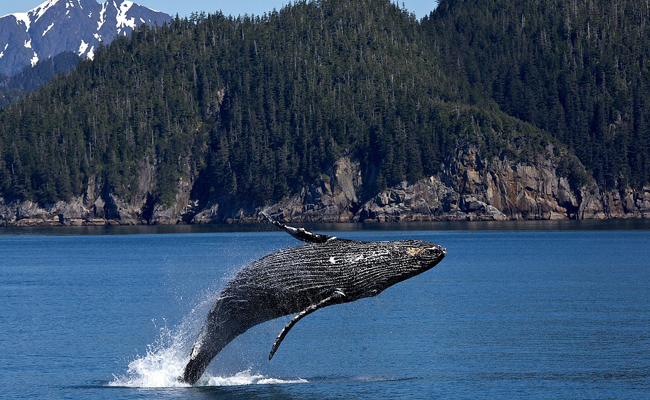 San Diego: the whale-crossing point to the Caribbean

The city of San Diego in California is offered a breathtaking spectacle, if you are lucky enough to be there during the right period.

Indeed, between the months of December and March, thousands of whales of different species roam the coasts to reach the waters of Mexico.

To be able to observe these immense cetaceans, you will have to go to the Cabrillo National Monument, on the southern tip of the Poit Loma peninsula. In addition to sheltering a splendid monument, this place perched 400 meters above the sea offers a splendid point of view to observe the migration of these magnificent cetaceans. You can also go and observe them more closely via sightseeing boat trips.

Baja California and Mexico: the migration of whales

Also on the American continent, the isolated bays with shallow waters of the Bahia Magdalena, Laguna San Ignacio and Laguna Ojo de Liebre see each year, between the months of January and April, thousands of whales migrating towards more waters. hot.

You can then observe an impressive number of gray or blue whales, and even sperm whales. What perfectly combine holidays in a paradisiacal place and unforgettable discoveries.

Dominican Republic: the birthplace of calves

Off the coast of the city of Samana, in the Dominican Republic, a most impressive spectacle takes place every year.

Between mid-January and mid-March, hundreds of humpback whales come to give birth in these waters to their young calves. A show that you absolutely must see in a lifetime.

However, you will have to be careful to choose a good tour operator to take you to observe this spectacle more closely, because some have no qualms about getting too close to these magnificent cetaceans, inflicting a lot of stress on them.

Dominica: a whale-watching paradise in the Caribbean

The island of Dominica is located in the Caribbean, between Martinique and Guadeloupe. In addition to being a true paradise island, we can attend a magnificent show every year.

In fact, between the month of November and the month of March, the coasts of this island see thousands of whales of different species.

You can then observe orcas, sperm whales, spotted whales as well as whales.

Maui in Hawaii: the common paradise of men and whales

The island of Hawaii is renowned for being a true paradise on land, but also a marine one. Located in the heart of the Pacific Ocean, this isolated island is populated from November to April with thousands of different species of whales that come to mate off its land.

This island is also known to shelter in its waters the greatest diversity of different species of whales. You will then be able to observe them of all sizes and all kinds.

Walker Bay in South Africa: unique whales in the world

On the southern tip of South Africa are cliffs as far as the eye can see. Off them, maritime life is very rich and diverse.

Via telescopes made available, we can then observe in this place right whales, a species that is only found in the south of the African continent. Prepare for a unique experience.

The last place on this list will take us to New Zealand, and more specifically off the coast of Kaikoura town, located in the south of the island.

From June to July, the waters of this island are populated with a large number of sperm whales. These 18-meter-long marine mammals are also accompanied by many animals, such as dolphins, sea birds and sea lions. What to rave about for long hours.