Apartment living is not for all dogs. The lack of space, the neighborhood as well as the absence of a garden in most cases are constraints that some breeds will not be able to accommodate.

Small dogs are generally thought of for apartment living, and it is true that they are generally more suited to living in more confined spaces and tend more to be home dogs, but some large breeds can. also, living in an apartment, as long as they are out regularly.

Level character, the bichons are not difficult. They bark very little, except in certain moments of play or sometimes out of fear. The neighborhood will therefore be very little disturbed.

Bichons do not need extremely intense physical activity. Thus, two walks a day (one in the morning and one in the evening), during which you will make him run and play, plus a few games at home when he wants to, will be more than enough to meet his needs. The rest of the time, the Bichons are rather calm and home-like, and will greatly appreciate the moments of rest with their master, warm in a very cozy basket. 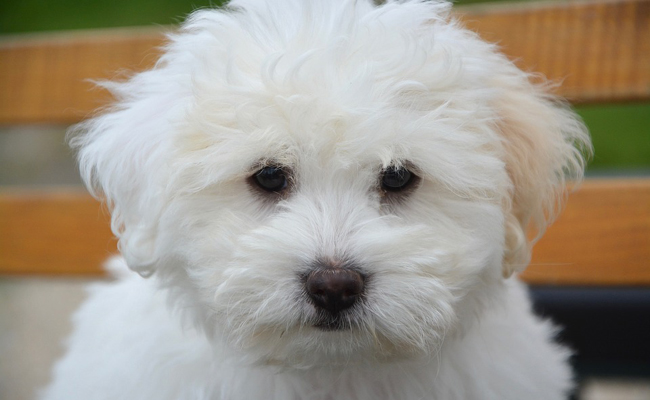 Similar to bichons, Tulear cottons are small dogs resembling white furballs, except that their coat texture is similar to that of cotton (hence their name). They measure around thirty centimeters at the withers for males and around 25cm for females, for a weight of 4 to 7kg. Again, therefore, no problem with regard to the lack of space.

Coton de Tulear will not require more outings than Bichons, namely two outings per day minimum by stimulating them to run a little. He also appreciates the calm and warmth of the home.

Even if one might think that the cotton of Tulear and the bichons are in all points identical, there is however a notable difference, which comes from the hairs. Indeed, the coat of Tulear cottons is much more abundant and grows faster. They also tend to lose their hair, especially during the moulting period, that is to say in spring and at the end of autumn. It will therefore be necessary to be ready and equipped to fight invasions of hair. And those continuously growing hairs will require regular maintenance, as well as visits to a groomer. You will also need to regularly check the condition of the ears and eyes, because these clumps of hair can interfere with or even infect these areas if they are not cleaned regularly. 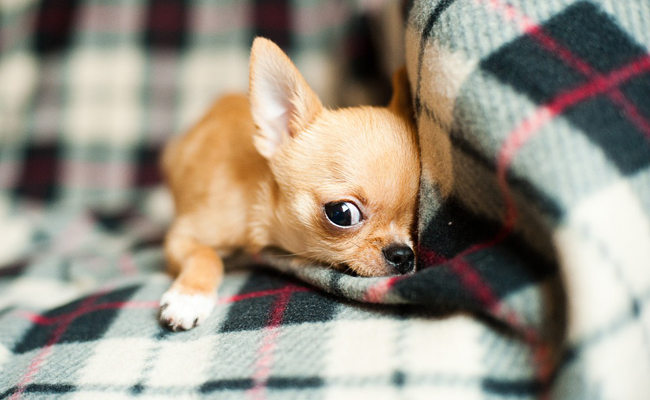 With its tiny size, even smaller than some cats, chihuahuas are obviously dogs that can live in apartments without any problem. Indeed their size ranging from 15 to 20cm at the withers, and their weight going to the maximum up to 2.5kg, they are therefore of an extremely “practical” format.

But despite their small size, chihuahuas are still dogs with needs. Even if the game can be fulfilled at home, they too will require at least two outings per day, if only to defecate.

Finally, you should know that chihuahuas are very fragile dogs. Also, do not hesitate to put coats on them in the winter when the temperatures get too cold, to make the reminders of the vaccines each year, and to consult your veterinarian regularly. 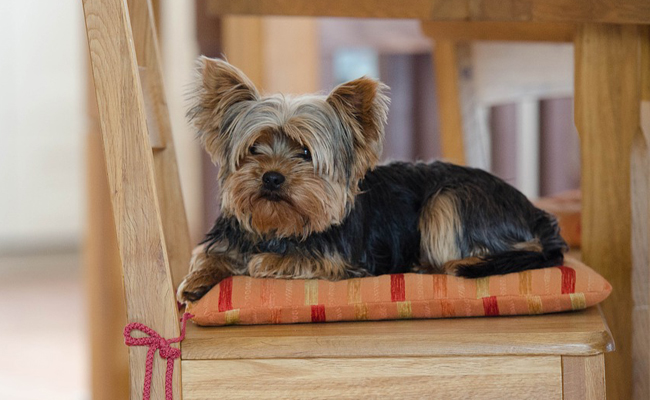 The Yorkshire Terrier is a breed of dog that is very easy to satisfy, since it knows how to adapt to most of the lifestyles that can be offered to it. Its small size, ranging from 15cm at the withers for the smallest females, to 25cm at the withers for the larger males, and its weight ranging from 2.5 to 3kg make it a dog that can quite live in an apartment without feeling too restricted.

The character of the Yorkie will usually depend on how it has been raised. Even if his morphology does not allow him to be a very sporty dog, a Yorkie can be playful and active as well as calm and home-like, as long as he has his two daily outings. It is also a dog that barks very rarely, and which, despite its long hair, sheds very little.

However, it will be necessary to check the condition of the eyes regularly, because the hair on his forehead tends to grow a lot and fall in front of him, which can infect them. The best will be to tie them or cut them. 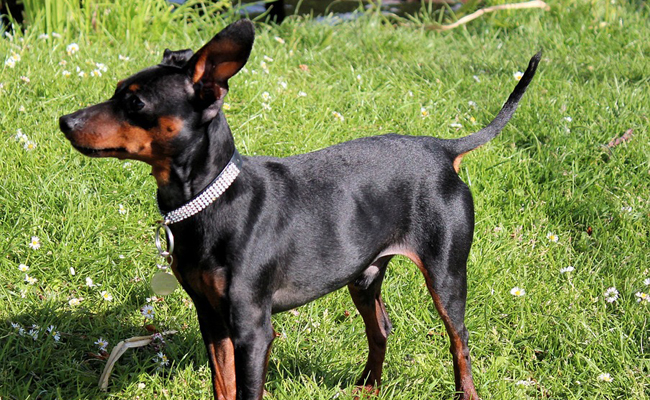 The Miniature Pinscher and the Medium Pinscher

Their very short hairs mean that you will never have a problem “invading” your home, and the animal will not have a problem with eye or ear infections. Because they don’t even have an undercoat, you won’t have a shedding problem either.

However, it is at the behavioral level that the pinscher is slightly more difficult than the breeds seen so far. Indeed, pinschers are very active dogs, who will need to go for long walks every day, and to play a lot to use up their energy. Under the effect of excitement, pinschers may tend to bark. If this happens too often and bothers your neighbors, some education work will help. 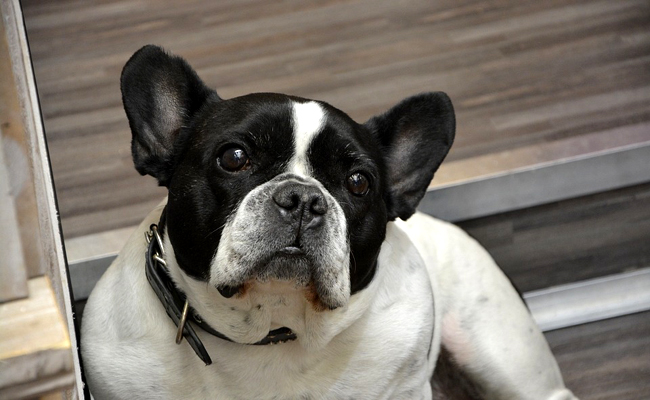 The French bulldog and English bulldog

French and English bulldogs are dogs which, by virtue of their morphology, adapt very well to a calm and calm life in an apartment. The French bulldog, the smallest, measures about 35cm at the withers for a weight ranging from 8 to 14kg. The English Bulldog is not much bigger at the withers, since it measures between 30 and 40cm, but it is much more massive, since it weighs between 23 and 25kg. Finally, there is the American Bulldog which is much too big and fat to live in an apartment. It will therefore not fall into this category.

The French bulldog and the English bulldog are, despite their common breed of origin, ultimately quite different. If the French bulldogs are capable of being fairly playful and, without being great athletes, of running and doing a little sport, the English bulldogs, on the other hand, have a build too heavy to really be active, and run on a long or medium distance. It will therefore be necessary to take them out at least twice a day, like all dogs, but without rushing them too much, especially as regards the English bulldog. In terms of barking, you will also be at ease, since they bark very rarely.

Finally, it will be necessary to make regular visits to the veterinarian, since bulldogs are in poor health. French Bulldogs tend to have breathing problems with their squashed face, and English Bulldogs can have heart problems as well as eyes with their heavily wrinkled faces. Finally, they tend to be overweight, so it will be necessary to monitor their diet closely. 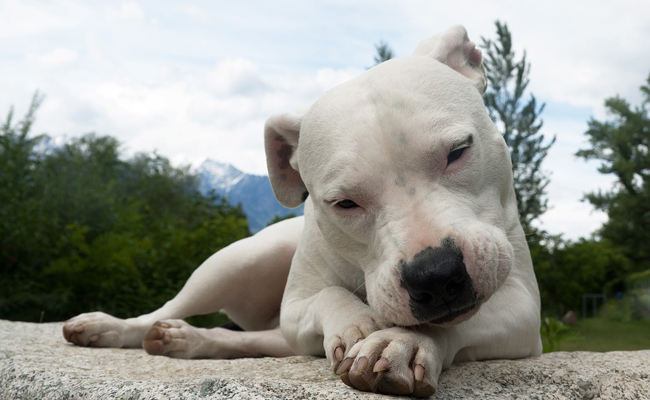 It may come as a surprise, but the Argentinian Mastiff is a dog capable of living in an apartment, under certain conditions. These dogs are large dogs, ranging from 60cm at the withers for the smallest bitches, to 70cm at the withers for the larger males. He can live in an apartment, yes, but not in a 20m². An apartment of at least 45m² will be necessary so that it does not feel too cramped.

It is their character that makes Argentine mastiffs dogs that can live in apartments, since they are naturally very calm. However, they are not recommended for everyone, since it will be necessary to provide them with a fairly strict education, especially during walks, something that a neophyte with dogs will not necessarily know how to do.

In addition, to compensate for the small size of an apartment, you will need time, because you will have to take out your Argentinian Mastiff very regularly, and make him exercise a maximum. As said above, These dogs can live in an apartment, under certain conditions.