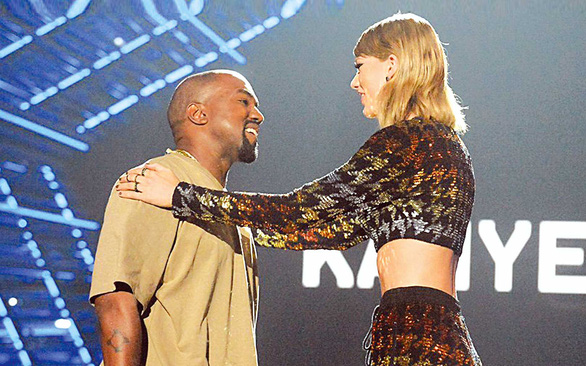 After announcing that he would run for president, recently famous rapper Kanye West again … put the Grammy Cup in the toilet and pee on it, as a challenge to the music industry when he couldn’t buy back from record giant Universal owns the masters (roughly translated as the first complete sound recording).

As they say, the best way to stand on the same side is when we share the same enemy, Kanye West forgets the feud with Taylor Swift and as if there has never been a “separation”, West urged her to stand together. Up to fight for the interests of artists.

Everyone knows that by the end of 2019, Swift sparked a similar war with Big Machine, but just a few years ago she also expressed her gratitude to them for “trust” her.

It sounds absurd for an artist not to own his compositions, but is a common occurrence in the music world – where music is after all a commodity.

Kanye West in his anger mentioning Michael Jackson as a victim of the music industry, unfortunately West forgot to mention the fact that MJ himself is one of the most sensitive “merchants” with the mechanism that West called “slavery”: when he was born, the king of pop quickly bought ownership of all the songs of The Beatles, then made a lot of money with them in the surprise of Paul McCartney.

Things like that can happen because it has its own reason mine.

Let’s start with the Taylor Swift story. When Scott Borchetta, the former owner of Big Machine, first met Taylor Swift, she was only 14 years old, completely anonymous, performing in a Nashville club.

Then, Borchetta has nothing and so does Swift. At that time, no one was sure that Swift would be today, but Borchetta still chose to invest in Swift. To say that Big Machine lives on Taylor Swift is fine, but without Big Machine there is no Taylor.

Although this sounds somewhat disappointing, the legend of The Beatles that landed in America for the first time in the siege of more than 10,000 fans is essentially: their managers allied with a production company. T-shirts and some radio stations so a message goes out every 15 minutes: every person who arrives at the airport to pick up The Beatles gets a T-shirt!

Today, when streaming services take the throne, record labels have to pay somewhere between $ 2,000 and $ 10,000 for the songs they want to advertise to be placed on top-selling playlists.

Stars may be upset that they can’t own the music they make, but who makes the stars, if not the labels?

TTO – Kanye West’s rambling speech during the presidential campaign has raised concerns about the male rapper’s mental health, and questions about whether West is seriously racing into the White House. .